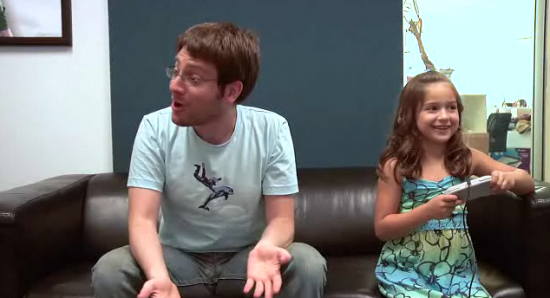 In the new Bleep Bloop Jeff and Pat show an 8 and a 6 year old some games from when they (and I) were kids.

At first I was feeling pretty “get off my lawn” at this video. Especially toward the 8 year old boy. But as it went on, I was kinda moved by it.

I’ve often thought about the generational divide between the younger crowd and my age group regarding video games. Sure the games are prettier these days but are they easier? Getting kids to play older games has always been something I’ve tried to do and it can be kind of a hassle. If the cousins or siblings are over I’ll definitely break out the Genesis and show them what it was like in MY day, but it’s difficult to keep their attention. Kids these days with their Halos and Modem Warfairs don’t wanna have to just run in one direction and jump on platforms. They don’t like pixels and sometimes the old games are ‘just too hard.’ If Sonic isn’t rapping, going on some epic quest, or hitting on an underage chick they don’t want any part of it. And don’t even TRY to tell them about blowing into the cartridges.

Even watching this video I was thinking about when I was 6 and there wasn’t a robot or goombah that could stand in my way.

Do you think kids today are soft? Talk about it in the comments.