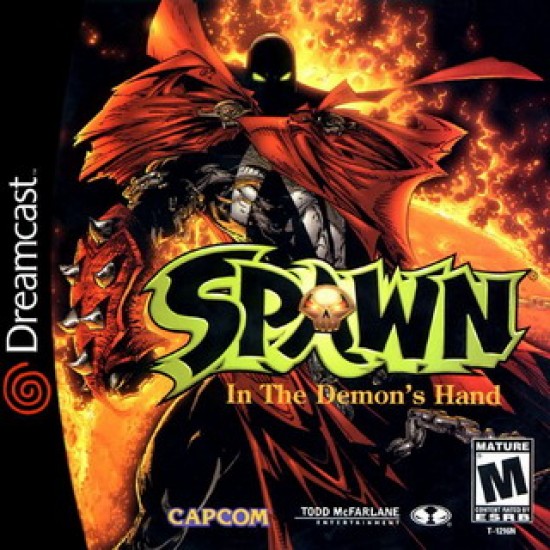 If any game deserves the black Dreamcast case, it's this one

Spawn has not had the best track record when it comes to videogames.  With most of the titles he’s been attached to, his name in gaming has kind of become synonymous with clunky combat, painfully muddy graphics, and circling the drain in general (the toilet drain, to be specific).  I guess I’m not one to judge so harshly, as I’ve never gotten to play most of these disasters.  I’m just still reeling from that time I asked my friend if he liked Spawn: The Eternal and he kicked me in the throat with a cleat.  He doesn’t even play baseball. 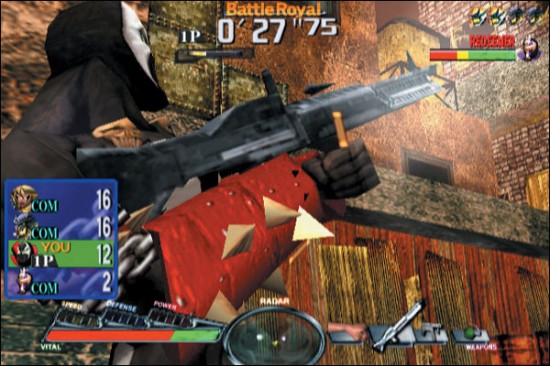 With that in mind, I had a bit of a dilemma with this week’s superhero game.  While I was returning to one of my favorite pick-up-and-play titles on the Dreamcast, I realized that there must be a handful of Spawn fans out there who may have steered clear of this classic from day one, if only because so many of Spawn’s outings have resulted in disappointment and perpetual rage.  I almost made In The Demon’s Hand this week’s Underappreciated Gem for the way it is criminally overlooked as one of the most fun multiplayer arcade ports on the little box of dreams.  In the end, I decided to keep it as today’s feature, as a reminder that Spawn is good for more than just brooding comics and really disturbing toys.

Spawn: In The Demon’s Hand was developed and published by Capcom in 2000, early in the Dreamcast’s woefully short lifespan.  The game is an arcade port of a third-person shoot-em up that has you playing as one of over 30 different characters from the Spawn universe, utilizing an even higher number of weapons to destroy your foes within one of a handful of small arenas.   True to its arcade roots, In The Demon’s Hand has no real story to speak of.  Just enter the arena with your fists, your guns, and your bloodlust.  Kill the other guys the most and you win.  This simplistic deathmatch gameplay will likely remind you of many similarly addictive first person shooters, with viscerally satisfying combat and a bevy of interesting and unique weapons.  The game unfortunately has a very slim list of play modes, though their quality tends to make up for their menial quantity.  The Boss Attack has you and a friend facing off against several of Spawn’s infamous villains and their minions.  The Battle Royale and Team Battle Modes are exactly what they sound like, simplistic, addictive four-player battles that will have you chomping at the bit for more. 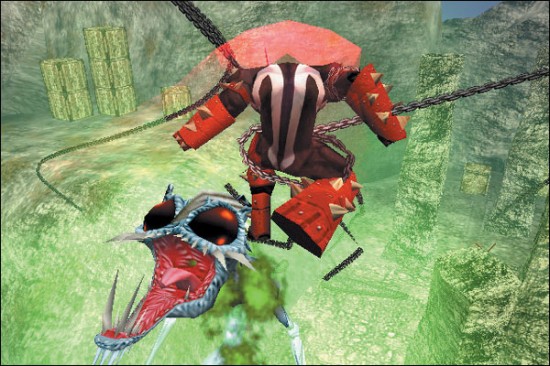 While the game modes and game mechanics will remind you of most generic shooters, the variety of characters is more akin to something from the fighting genre.  Capcom gives you 36 individual heroes and villains from every corner of Todd Macfarlane’s bizarre universe.  These include everything from the standards (Clown/Violator, Spawn, Tremor, Overtkill) to the fan-favorites and obscure (Cy-Gor, The Curse, Cogliostro).  Capcom does a commendable job at giving each of these characters their own personality and play style, exemplified most through each character’s special moves.  For example, Spawn starts a match with a couple randomly selected weapons, grenades, and his manly manly fists.  If you click down the right trigger with your melee equipped, his trademark chains fly out across the screen to stab at an opponent.  If you play as Tremor, however, you start with no long-range weapons.  Instead, Tremor pounds his way through the arena using only his naked fists or clawed brass knuckles.  His special is a running charge or a powerful extended punch from his piston-powered arms.  Even Clown’s transformation into Violator is supported, trading in his entire comical weapon-based moveset for a monstrous new one utilizing Violator’s long slender claws. 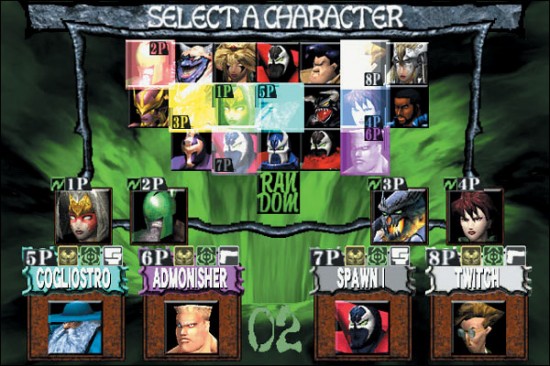 Note: I think this is the arcade version, so imagine another 15 or so character slots.

This glut of unique characters coupled with simplistic, shoot-em-up gameplay makes for a surprisingly deep and varied experience, especially with the multiplayer deathmatches.  Once again, thank the Sega gods for adding the four ports to your Dreamcast.  Nothing comes close to playing this in your living room with three other players, blasting the hell out of each other, squinting to see your corner of the screen and stuffing your face with pizza rolls. Like so many other splitscreen shooters of yore, In The Demon’s Hand carries the potential to suck up several afternoons.  There’s something so satisfying about whittling away a room of enemies, then eradicating one of them with a final shot, ripping his body to shreds and sending gushing blood from the gaping hole where his head used to be.  This accompanied by the bloodcurdling scream of the defeated friend sitting next to you will bring a sinister smile to your face. 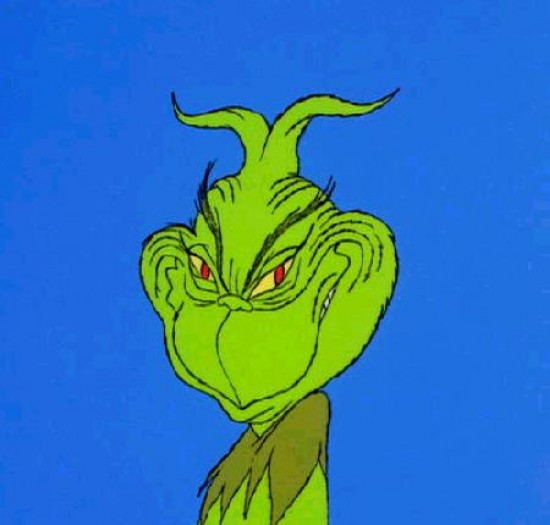 Just to warn you, though, there’s an outside chance that this multiplayer party may result in a lot of fights, a lot of shouting, and in some households, a little bit of real-life gunplay.  This is due in large part to the game’s frustrating camera and loose controls.  Many of the bosses in Boss Attack Mode are rather unforgiving, and it can get pretty damn frustrating to have your character slaughtered because the camera seems somehow fixated on Overtkill’s grinning maw. If the camera wasn’t inconsistent enough, the game’s loose targeting system pours a little salt on that wound.  While it is very easy to direct your character to shoot, the confusing camera can send many of your bullets off into oblivion, while Cy-gor lunges at you from offscreen, dismembering your torso and leaving your legs still standing and gushing blood straight upwards (how do they do that?). 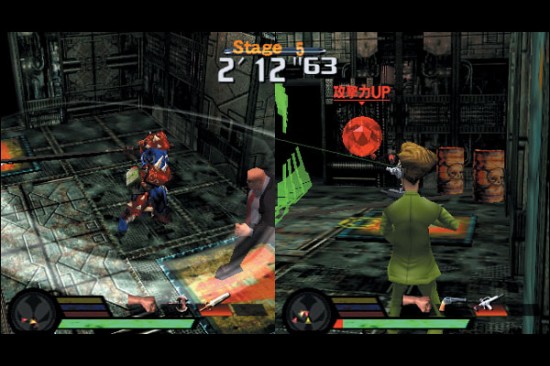 Another problem that may turn some Spawn fans off is the complete disparity between the serious, grim, pitch-black tone of the comic book and the vomit-flavored Sonic-ified hard rock feel of the game.  I always found the ladder to be rather hilarious, and thus came to enjoy its corniness, but I can see how any Spawn fundamentalist would cringe at the sight of some of Capcom’s interpretations of what “brooding” really means.  The opening video of the game is a digitized Spawn music montage, underscored by the absolutely laughable nu-metal track by the band Crankshaft, with lyrics like, “Tearing up all faces, tearing up all eyes/ Rip it up, rip into you/ Torn up, it’s terrifying”.  When I was a kid, this was the shit.  Now that I’m older, I realize that it is shit.  The game also has the rudest, most controlling announcer I’ve ever heard. When a boss kills you, he simply blurts out, “YOU DIIIED.”  If you lose against a boss, the game gives you no choice,  “YOU MUST CONTINUE”.  To this I chuckle and yell out Stephanie Tanner’s classic Full House catch phrase: “WHERE’S MY METH!!”  Heh.  Just kidding.  I love you Full House. 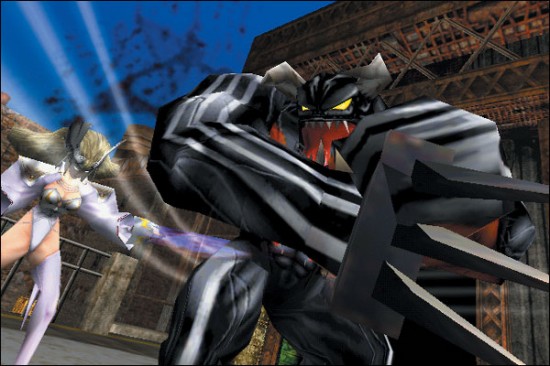 Because of this game’s addictive, heart-pounding multiplayer experience and almost limitless replay potential, I can’t help but hope for some kind of XBLA or PSN re-release with online play, larger maps and more play modes.  I would give anything to play a Capture the Flag mode, or to have up to 10 or 15 players killing each other across massive arenas using this same style and variety of play.   The addition of modern online multiplayer would also get rid of the drop in framerate that comes with playing splitscreen.  This game has surprisingly gorgeous graphics in the single player matches, and it’s a huge disappointment to see those details disappear when the screen gets sectioned off.  Maybe it’s just me, but this game seems like it’s made for online play.

But I’m not an idiot.  I’m well aware that the chances of this re-release are sadly slim to none, especially with the potential licensing issues.  It’s a bummer, because more Dreamcast and arcade lovers need to discover the best Spawn game out there.  I’ve managed to introduce a handful of people to its charms, and they fell in love with it even faster than I did.  Yes, the aggravating camera, the floaty controls, and the cheesy aesthetics may turn some off, but if you look deep enough, you may find your next multiplayer addiction.  Just don’t play as Clown.  He’s mine. 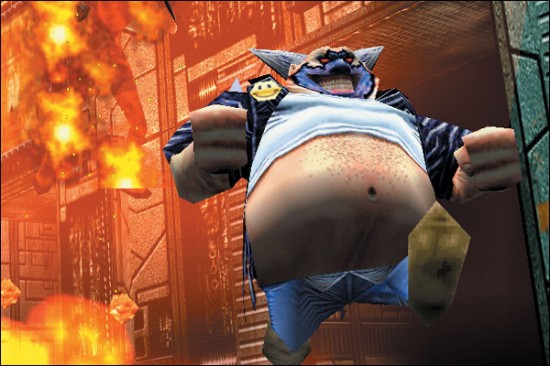