Reviewing an MMO takes time, I’ve learnt. A lot of time. Due to the way the content is structured, the only way to really do so is to start at the very beginning and play as much as possible in order to get a full understanding of what the whole game is about. This could vary depending on how complex the game is. Unfortunately, Phantasy Star Universe is very complex.

There’s also almost no tuition, so this is going to be written as both a critical eye on the game, and as an account of learning to how to play the game essentially. The plan of this initial part is to give you a rough breakdown of what your first 25 hours in the game might be like. To start with naturally, is the character creation system. It’s fairly rudimentary, where you can customise the look, size and race of your player character. The nice thing about PSU is the strange setting allows for all manner of proportioned characters without breaking the diegesis of the world. That’s just how things are in Phantasy Star. Somewhat serious, yet somewhat ridiculous. I ended up creating a wisened old warrior of the Beast race, because of their aptitude with melee weapons. Truthfully, the class system in PSU is fairly robust to allow any combination of class/race to be fairly capable, and you’ll never completely screw yourself. Newmans are the elf-like race who’re most effective with Techniks (Magic), CASTs are the best Rangers due to their accuracy and humans are somewhere between all three. There’s also another major difference, but I wouldn’t learn that until around level 20, so we’ll take that then.

Another interesting part of the customisation is that you can change the clothes of your characters independent of your defensive equipment, where usually the best armour for a mage in WOW forces the player to wear something highly effeminate. Here it’s entirely cosmetic, and all races besides the CAST can trade clothing freely. The CAST function somewhat different in that they shop in different stores which cater solely for parts instead of clothes, meaning CAST actually change around their entire head/arms/legs/chest to look the most/least robotic as the player wants to, which is a nice touch. If you chose a CAST because you like the idea of playing as a machine, they definitely have you covered there. Problematically, a lot of this I discovered as I was just exploring, as very little was ever detailed to me by the game. The manual isn’t even particularly useful in telling you what you should be doing either, so only after 20 minutes of wandering did I realise the game had stuffed me into the most unpopulated of the twenty servers in the game, but luckily it’s very simple to switch server in seconds provided they aren’t full. 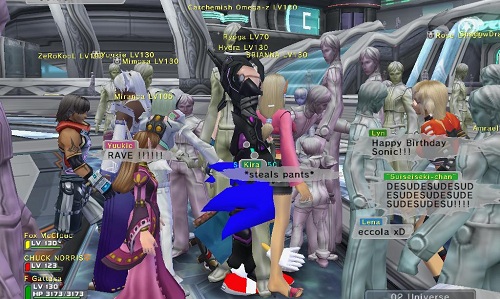 When you do join, and most likely you’ll want to pick ‘LEO’, you’ll notice something rather terrifying. Did you ever play Disgaea? And notice all the insane levels of the NPCs that populate your castle? It’s like that, but with actual people. The first person I approached was a level 180, the highest possible rank in the game. It didn’t fill me with confidence that I’d find many people to play with.  I didn’t even think I had a character class yet, so at this point I headed straight to the Guardians HQ where a nice NPC informed me of the different classes I could choose and offered me an initial selection between Force, Hunter and Ranger (Magic, Melee and Ranged). Completing missions will level up these classes, which increases your stats and unlocks better jobs along the way. Jobs not only affect what stats you get but also what equipment you’ll allowed to wield. The more pure strength you focus on as a fighter, the fewer more athletic weapons you’ll get to use even if they are melee weapons. It’s a little intimidating, but again there’s no way to ruin your character as no decision from here on is permanent, so it’s actually rather nice in letting you just play around and see what suits you.

There’s also a mission counter at the HQ, however this leads only to event missions and story missions, the latter I chose and realised they are entirely single-player affairs. They’re pretty awful too, with dull voice-less cut scenes tying incredibly tedious missions together. The UI doesn’t help to improve things there either, where a boring initial one required me to hold B, pick my goggles, let go of B, press X, view a plant in first person and then finally I collected 1/5 samples of plant. That’s ridiculous, even by MMO standards. Luckily, you can just ignore the story missions completely, should you choose. And you probably should, although it’s the only way to earn Partner Cards, which are AI partners you can invite into your party should you feel the need to play solo without the major disadvantage.

Mission structure is pretty bizarre, in that there is no single lobby you choose to select missions from. Instead you have to find mission counters at various exists spread across the planets. To pick an example, the Linear Line Platform is the earliest ‘stage’ in the game, and entering it you can choose to do the first mission. Completing that mission takes you to a new lobby to refresh and buy healing items before setting off on the next mission from there. Often times there’s even a branch here, to choose what mission you want to do next, leading to different stages and different boss fights, which was one of the key additions of the expansion pack. You can however choose to join a party from the starting gate, which lets you skip any of the previous missions and go straight to the one the party are in.

This is of course the toughest part of trying to play PSU these days, and that is that the majority of the community are so high level that there are very few actually weak enough for you to party with. It did ease up once I hit around level 20 or 30, but do expect some very lonely missions otherwise. That said, I did manage to meet people who were even lower levelled than I was, and the alienating feeling emanating from the other players actually encouraged me to buddy up with them, so if you’re the kind of player that makes friends easily you would do well to form up with any low ranked party you happen across to make things a little more communal as you progress. 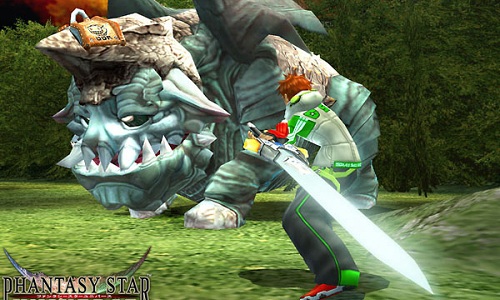 It’s pretty standard fare for the first few levels, although once you get your first Photon Art things do manage to liven up. Each class of weapon behaves similarly, where you simply use one button to hack and slash your way through monsters like any old fashioned beat ’em up. You can however stick a photon art to your weapon, which gives you another attack to use, which can be upgraded through use to become stronger or even to add entirely new parts to the move. Rising Slash for a one-handed sword lets you smash enemies into the air, but levelled up will also let you jump up to meet them and then return them to earth with another strike. It’s a very simple system, but it’s certainly more complicated than in the original Phantasy Star Online and I definitely enjoy it a lot more. The way that you can actually kick enemies around the environment feels a lot more dynamic than I’m used to in most MMOs. The variety of weapons too is gleefully insane, as I soon learnt from the plentiful drops. Handguns, sabers, double sabers, twin sabers (amazingly, those are different things), swords, handguns, pikes, twin handguns, machine guns, knuckles, wands, cards, whips, slicers.. there’s an awful lot to choose from, and those are only the once I managed to remember.

I found my niche with a support robot and a one-handed saber, where I would slash down enemies whilst he automatically shot and stunned the next one ready for me to safely close the distance between us, and things remained pretty engaging for a while. The mission structure is definitely bizarre, but it did turn out to be quite fun to explore. I partied up with a group of three and we tackled an entire series culminating in a boss fight against the White Beast Alterazghoh. Along the way two low levelled Forces in Rappy Suits (Think Tweety Pie, only murderous) appeared from the lobby, healed us, buffed our stats, ran around us and then left. I’m not quite sure why, but it’s nice that this late in an MMO seemingly random acts of players enjoying themselves in unorthodox ways still occur. As if the people still playing weren’t simply doing so out of obligation or addiction. There’s a really fun social aspect that’s still in full flow, with dozens of players just hanging about on the Colony.

By this point, I was actually starting to think a full review wasn’t necessary, as long as I got to play some of the Advanced Content after that boss fight I was pretty confident that I knew the game fairly well. Similar to it’s predecessor, but with enough tweaks to keep it fresh and exciting. It was at this point that we charged the boss, the CAST of my team utilised a gigantic mechanical fist that materialised from the either and our Beast transformed into a shape of invincible domination. We battled furiously, taking it down and earning an achievement in the process. We then received what was apparently a ‘Rare Free Mission’. Rare drops in Phantasy Star Online/Universe are pretty much the name of the game, however I had certainly never seen anything drop a mission before. On enquiring, I was informed they were missions that awarded 500% of the regular EXP and took place in re imagined versions of the original PSO worlds. Apparently, I knew absolutely nothing.

And that’s why this review is in two, as I’m still at this very moment fighting to get stronger and further. PSU rewards time investments far more than most MMOs I’ve seen, and although a lot of the underlying system is a little haphazard there is a wealth of content I’m going to have to sample before a proper verdict is ready. I’m excited though, which is certainly no a bad thing. Next time we’ll be looking at the underlying systems in more detail, such as the advanced professions, the Guardians Advanced Content, the mind boggling stupidity of the synthesis machine, and hopefully round up everything together with a final verdict. And if we have time, the Casino that offers chainsaws as prizes.