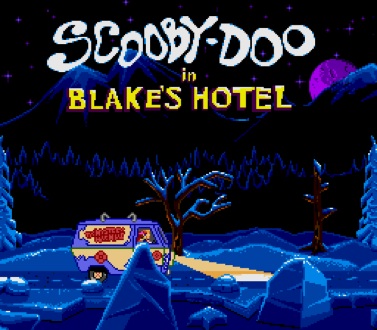 Now that a new and fantastic Scooby-Doo! Mystery Incorporated has hit the air, I wanted to look back at Scoob’s entry into the world of Sega.  Scooby-Doo Mystery, developed by Illusions Gaming and published by Acclaim for the Sega Genesis, was more or less a clone of games like Maniac Mansion and King’s Quest.   Depending on if you are a fan of point and click puzzlers, you will either find this game to be a delightful breeze or hard as nails.  If you have the kind of mind that thinks a battery, a pop tab, and a Christmas light bulb should be combined into a flashlight, you are the target audience.  The use of items is fun and fitting in their cartoony world.  Of course you use a bedspring to bounce, and obviously you have termites instantly eat a wooden stockade to free poor old Uncle Blake.  The goofy nature of the game play is easy to enjoy, even if you need to check FAQs constantly to figure out that you need to fish in the river for a doll to give to the bellhop.

Scooby-Doo Mystery retains all the humor from the show.  Doors are chased through, hair flies off heads, and pizzas are lusted after throughout the game, making anyone familiar with the series nostalgic or just plain happy.  The dialogue is pitch perfect for the characters and scenarios are structured to give an organic feeling for why Shag and Scoob are separated from the Daph, Fred, and Velma.  In “Ha Ha Carnival,” Shaggy and Scooby are afraid of riding paddleboats and would much rather jettison from the gang, letting them have fun while they look for a hotdog cart.  Shaggy’s reactions to objects are amusing and bluntly astute.  When looking at some potted Poison Oak, Shaggy exclaims, “Yikes! And this guy is the gardener!”   The only thing missing is a laugh track. 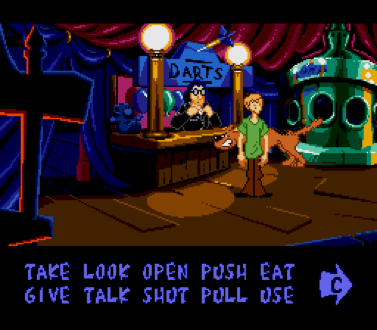 The animations are smooth as he struts along where you control him to, with Scooby following along, pointing out clues along the way.  The graphics are suitably cartoony, brilliant colors fill the screen from head to toe and shadows are represented by deep shades of purple and blue.  Much of the game is shown through dynamic camera angles, giving the game a creepy tone as though someone was watching Scoob and Shag behind the eyes of painted portrait.  Shaggy and Scooby are so well presented and fun to play as that I feel slightly bad for being disappointed in not being able to control Daphine, Freddy, or Velma.  I wish that item control and interactions were smoother as well.  The point and click interface is great for a mouse, but slow on a console.  Playing it now can at times feel like a labor of love.  Luckily, I love Scooby-Doo.

The music in the game is awful.  It’s a pretty standard re-creation of themes from the show, but it’s ruined by high-pitched and loud electric beeps.  You’ll begin laughing in a delirious state brought on by the merciless feeling that someone is slapping your eardrums with an electric eel.  Advice: Mute the game and put on any other music, preferably an 8-Track or LP. 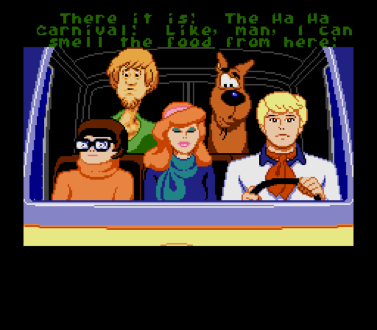 After playing through the game and watching several episodes both new and old, I was feeling a bit Scoobed.  As I turned off my desk light and tried to get a little shuteye, a sound of shuffling came from the living room.  “Zoinks!” I thought, “There’s a monster in my apartment!”  I hid under the covers a la Shaggy, but Fred must have somehow broken into my consciousness, rousing me to peek out my bedroom door and see what the hubbub was about.  I saw a shadowy figure moving in the dark, tiptoeing around my home.  As I was about to pounce and rip off the intruder’s mask to find a disgruntled plumber looking for hidden treasure, I realized it was simply my roommate getting a glass of water before bed.  Oh well, maybe next time I’ll find be a real life octopus witch in my linen basket. Until then, I’ll have Scooby-Doo Mystery to play.