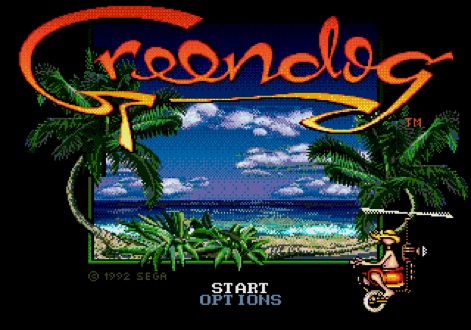 Ah the Nineties.  Nothing was cooler than some baggy shorts, a strangely shaped skateboard, and hangin’ ten.  Interactive Desgins decided to develop a game that included all three, giving it the potential to be as radical as Sonic.  But alas, like many tublar tales of the time, Greendog: The Beached Surfer Dude! wound up a mere poser, sitting at the end of the cool kids table trying to listen about last night’s party that they didn’t get invited to.

Greendog washes upon Grenada after a gnarly wipeout to find an ancient medallion around his neck, which he finds he cannot take off.  A buxom blonde conventiently is there to tell him he cannot take off the pendant until he assembles an Aztec treasure from six pieces hidden on six different Caribbean islands.  Until then, the necklace will make all the inhabitants, animals and people, go crazy and attack him.  The story is fun and gives a reason why normally docile creatures want to kill you.  It serves the game well and lets us quickly focus on game play. 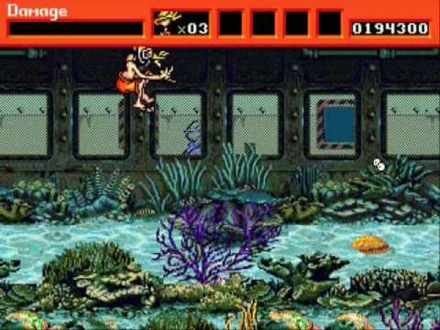 Greendog is a faceless hero.  Literally, he has no face and barely a nub for a nose.  Perhaps the developers wanted gamers to imprint their own likenesses onto Greendog as they played through the adventure.  But because of his distinct tall, lanky physicality and his bright, blonde, and perfectly kempt swooping quaff, I found it hard to see myself in Greendog and longed for a little more character.  Greendog’s lack of reactions to his environment, his actions, and even when he takes damage makes him feel cold, emotionless, and hard to empathize with.  The lack of a face comes across as lazy and prevented myself from feeling like I was controlling person but controlling a vessel.  When the games enemies have more personality than your main character, it’s a sign the rest of the game might not be that hot.

The enemies in the game are quite charming.  Sunglass wearing starfish, eyes that become pufferfish, walking totems, and tiny fish with giant teeth will put a smile on your face even though they’re trying to kill you.  You defeat them with a Frisbee, which has an upward arc that makes it a very accurate weapon, unless you have to jump to hit them.  The stylization is bright and radical a la tee shirts in the nineties.  Variety of backgrounds makes reaching new levels interesting at first.  Vibrant greens and blue compose the jungle, shadowy grays outline the temples, and grit and concrete pave the cities all set to some unique calypso music.  Some levels include an adorable puppy that runs around until you can find it a bone to chew.  The best part of the game involves this dog.  During an underwater level, you see him in the aquarium bounding about in a scuba mask!!!  Cuteness!  However, the novelty of pretty graphics and funny enemies wears off fast due to dull and frustrating game play. 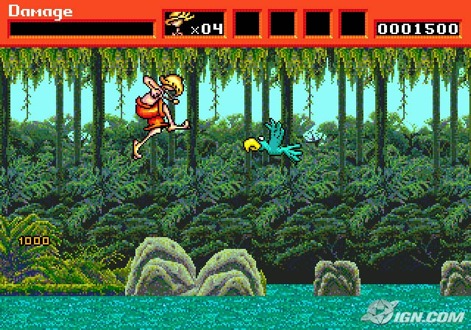 The platform levels all consist of jumping between rocks and avoiding fish.  Sometimes its bats instead, and sometimes your underwater, but it’s all the same.  It’s hard to see what’s coming up when your character is in the last third of the screen as you walk your path.  This happens often with Greendog, leaving you vulnerable to bats, frogs, and other flying and jumping hazards.  During some platforming sections, flying creatures will not appear to attack until you are on the very last centimeter of the edge you must jump from.  If you jump before touching the lip, even if you can make the jump, you’ll be hit as you cross the chasm.  And if you jump anywhere but the dead center of a moving platform, it counts as a fall and instant death over a pit.   If water passes over your head, you die immediately. Cheap hits and instant deaths are found constantly throughout the game, making enjoyment during the platform portions minimal if not an impossible task.  The skateboard and pedalcopter sections somehow fair worse.

In skateboard/roller blade levels you must hit jumps to clear obstacles (by the way, some these stages include both, just so you can choose which fly mode of transportation you’d like to use).    In Jamaica, you must perfectly time your jumps off ramps; otherwise you’ll hit a parking meter, which will fling you backwards past two parking meters.  Trying to control the skateboard is clunkly and too slippery to be accurate.  With such tiny margins of error, you can be at the beginning of the level because of one bad jump in the matter of seconds.  After each area is a pedalcopter section that is too simple to justify its inclusion.  All you need to do is hit the jump button to pedal to the top of the screen to avoid all enemies.  Regrettably the best strategy in these parts is to hope you don’t die before the end of the level.  Your personal best strategy is to avoid Greendog altogether.

Greendog: The Beached Surfer Dude!, despite its funky fresh music and graphics, get a C- for uninspired platforming, horrible skateboarding, being generally not fun.  Bogus, Brah.