If I’m ever in a life threatening situation where I have to state one good reason for the Wii’s existence my answer may involve lightgun games. Not only are lightgun games’ natural arcade habitats dying off but older consoles’ lightguns are no longer compatible with today’s era of HD TV’s. I was a sad man the day I discovered my Dreamcast lightguns no longer worked with my home TV, and I have no intention of playing House of the Dead 2 with the Dreamcast controller.

In comes the Wii (and Sega) to the rescue. The first Wii game I played was House of the Dead: Overkill and it remains one of my favorite games on the system. Along with House of the Dead 2 & 3 Return and Ghost Squad the Wii already has an impressive amount of Sega arcade games. Last week, Sega added to that library with an “Arcade Hits Pack” that includes both mid-90’s arcade games Gunblade NY and LA Machineguns.

How do these decade old arcade games hold up and are they worth the $30 price tag? Hit the jump to find out. 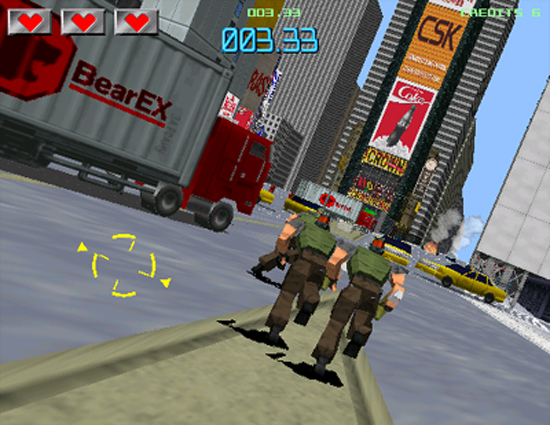 The most jarring aspect of the Arcade Hits Pack is how dated the graphics are. House of the Dead 2 on the Wii may have been a little dated but these games hearken back to the days of solid color textures and characters modeled out of refrigerator boxes. For some, like myself, it brings back fond memories of a simpler time in gaming, but for others it may be incredibly off-putting, especially, for those picking up the game with little knowledge of what they’re getting into.

The gameplay of both games differs from other Sega lightgun games in the fact that you’re using machineguns that require no reloading. Where games like Virtua Cop contain some strategy in lining up your shot and knowing when to reload, Gunblade NY/LA Machineguns has you holding the trigger the entire game and shooting everything in sight. It’s incredibly exhilarating at first but the lack of any real dynamic and necessary strategy makes the game drag on a little bit after the first couple levels. 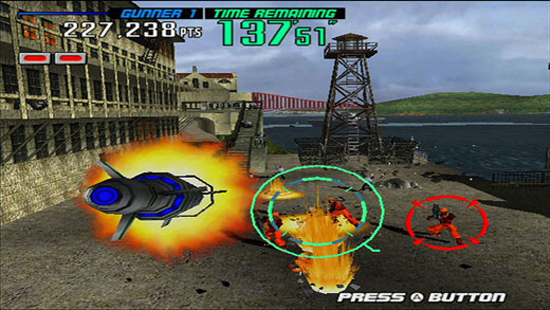 The games don’t drag on too much though because both games are incredibly short. I beat all the campaigns in close to an hour and with few unlockables there isn’t much content on the disc. This is not a game I would recommend picking up with your last $30 especially if you’re looking for a substantial single player experience. By the time I was done with my first play through I was ready to be done and had little interest in going back and unlocking anything. The unlockables themselves are just a few different firing modes which did little to tempt me to continue playing.

In fact, this is a game I see as more of a play a couple times a year with a friend and then put it back on the shelf for a few months. Eventually, that $30 price tag is going to seem reasonable as the amount of time you’ve put into it increases over the years. You’ll be lucky to find either of these games in a local arcade especially in complete working condition. There’s a copy of LA Machineguns near me but the screen has faded dramatically and when I booted up the game on the Wii I was astounded by how much brighter and more colorful everything looked. If nothing else I hope this “Arcade Hits Packs” is the beginning of a long line of Sega releases as there’s a lot more arcade experiences that need to be preserved.

Gunblade NY/LA Machineguns gets a C for being a fun yet dated and short gaming experience.