(Please note that due to being entirely messed around by my internet provider, also the reason why I’ve been suspiciously absent lately, this review is being finally posted from San Francisco where I’m tremendously jet-lagged. That’s right, I traveled halfway across the world and backwards in time now for this review. You’re more than welcome.)

So yesterday I solo’d a an A-rank De Rol Le. Anyone familiar with even the very first PSO iteration will remember this bastard. The dragon was fair game for most players, but I’d be incredibly skeptical if anyone managed to make it through the first battle with him without being poisoned to buggery and slaughtered as consequence. So understandably, my Beast guy with the punchy fist knuckles was pretty proud of himself, and as I usually do I carried on to the stage that followed the sewer leviathan. I went to the casino.

According to the information on Sick Odds, now this is an actual factual casino mind, where you’re awarded coins that can be traded in for special weapons or items, including a two-handed chainsword. Rather kindly, you don’t have to ever gamble to get items, as you’re awarded coins just for showing up. Although it’ll obviously take you forever to do so (a full 25-days just for the CHAINSAWD), it’s still an option. 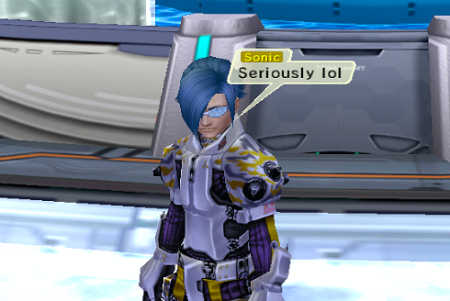 The reason I solo’d De Rol Le in reality though, is that there just isn’t any way to play anymore with people you don’t know on any of the various missions in the game that aren’t ‘White Beast’, a stage that notoriously awards high amounts of job experience. When I returned to PSO in the form of the PC’s Blue Burst I had great fun teaming up with other people at the same level as me, recruiting more and more members, laying claim to possible weapon drops before we ventured forth. The nice thing about PSO and PSU is that the varying classes means that there aren’t an awful lot of fights for decent loot even if you don’t know everyone with you, because the more specialised your class the less of the other weapons you could actually do anything with. The bad thing about PSU is that half the time this isn’t a problem, as you’re just running around with an AI partner or a single other player anyway. Unless you happen to be playing on ‘White Beast’

Which isn’t to say there aren’t a lot of people playing, as I was still able to play on the first server at almost full capacity, so even at the height of popularity there wouldn’t be any greater a population. The population that are there already however are already at heights far beyond my own peak. Not only are they players already familiar with the lofty heights of S-2 difficulties on missions, but they’re actually waiting for the S-3 difficulty which has already surfaced on japanese servers. There’s a terrifying disparity, and it really makes me wish I’d kept up with the game at launch, as trying to get in now is pretty tough unless you managed to convince a bunch of regular friends to take the jump with you.

Though should you? After all my time with the game (we are past 50 hours now thanks to a sudden rush of not-broken-internet) I can honestly say I’m really happy with it. A lot of the interface is kind of stupid, but it’s something you can easily work around. Synthesizing weapon boards can take real-time hours to have only a 70% chance of actually making a weapon, but you’re almost always able to just chance a drop of actual weapon anyway, and in doing so earn extra experience and upgrade your jobs. The Advanced Content seems tailor made to create a really interesting challenge, encouraging creative teamwork and trying to find the right balance of powerful weapons that your limited level character (the missions reduce everyone to level 20) can actually use effectively. It’s all formed into a really fun game, even the incredibly dated visual bring to mind a strange nostalgia from the Dreamcast original. 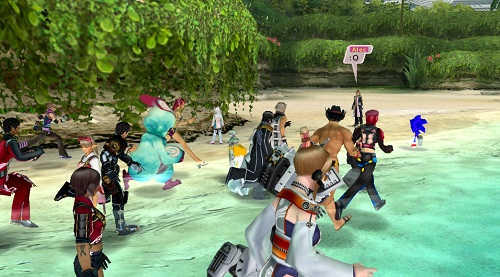 Which is why I really hate saying that you shouldn’t get it. Clearly, I’ve been enjoying myself, and I’d really be interested to see what a group of people who could play together regularly could achieve, but ultimately it makes you need to try and enjoy the game in a series of confusing configurations of unneccessary complications. The boss encounters are easily dwarfed by the entirity of Monster Hunter (Especially with the Wii version offering free online), the community aspects and eclipsed by the immense popularity and casual appeal of WOW and the hopeful applicants of the next big free PC MMO (No matter how cheap they’ve made PSU now, it’s tough to compete with something as cheap as free). Even Phantasy Star Portable (and presumably its sequel) offers what essentially IS the experience of playing PSU these days anyway. Far from being a watered down handheld version, it’s more accurate to think of it as what PSU has effectively become for most players.

I think the critics of its day and the Phantasy Star Online loyalists were far too hard on Universe. I really did enjoy my time with it in the end, so much so that I will probably keep the subscription going for a short while just to keep abreast of any changes and because accruing power and items in a permanent manner while listening to podcasts is a weirldly habitual affair for me now. However, there are just so many better premium/free PC/console ad-hoc/online MMO/solo grindfest/communal gaming experiences out there that you really don’t need to try to like Phantasy Star Universe. If Sega ever release another online Phantasy Star game I will definitely be there on day one simply because PSU has left me wanting that experience again. I think if you’ve never played an MMO from launch you really owe it to yourself to try to one day, and if games like Monster Hunter/Cabal/Vindictus are anything to go by the increased focus of much more engaging action is something that people are excited about in online RPGs, and so they probably owe something to Sega for testing the waters

Phantasy Star Universe may be vast, but there are much easier ways to better enjoy the best aspects of it. C+