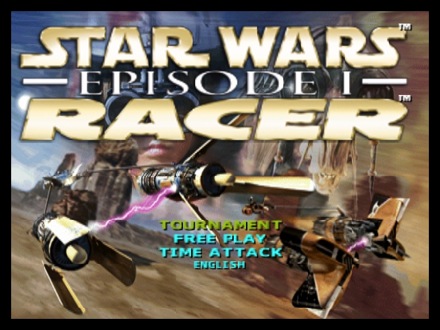 Star Wars: Episode One came out to diverse opinions, ranging from “It wasn’t that bad,” to you know what.  But one thing everyone agrees on is how sweet the podracing scene was.  They’ve basically distilled that sequence into a video game and given it the most generic title ever.  Star Wars Episode I: Racer, developed and published by LucasArts for the Dreamcast in mid 2000, must have been the holding title until the Creative Title guy came in.  Unfortunately, that person must have quit due to low wages and the team left the working title for the release.  Luckily, the Creative Title position was filled before Star Wars: Battlefront came out otherwise we’d be playing Star Wars Episode II: Shooter.  But hit the jump for my Retro Review of Star Wars Episode I: Racer, henceforth referred to as “the game.”

This game isn’t gimmick heavy, using many standard racer tropes, but it feels fresh because of the speed, the settings, and the courses.  Some courses are a speed demon’s dream with laps that take fifty seconds to complete.  Others are more long form, focusing on the stamina of the racer and avoidance of obstacles.  There’s nice variety of straightaways, corner, tunnels, and jumps that all give the player a more than decent challenge.  I never tired from the courses, not even having to replay them.  You’re going so fast that you can only really concentrate on the stretch, whether there’s a sharp turn or which one of the multiple paths you should take. 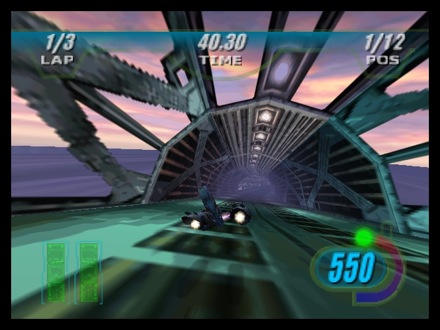 The Score gives the game a legendary ambience.  John Williams’ score elevates the game and sounds beautiful through the Dreamcast’s AICA Sound Processor.  Some of the themes can seem repetivie because of their focus on certain movements (like the main star was motif which I just tried to type out #embarrassinglystupid) and the lack of more than a handful of tracks, but when it’s John Williams, you can’t complain too much.  And remember all those sounds in the podracing scene from Episode One?  The little Vrooms and chugs that made it the best part of the new trilogy?  Well they’re all here and are great.  Crashes boom, scraps tear, and whizzes whiz.  The sound design also plays a huge role of making the Dreamcast version the best console version of the game.

Graphics and character design are suitable for the game and the universe.  Each character has unique details, such as goggles, hats, multiple arms, etc. that bring a uniqueness and look good with the hardware (Anakin looks a little goofy though, but fuck that guy).  The courses seem to be designed with blur lines as part of the design.  It gives the feeling your flying through courses and that your odometer reading four hundred seventy six is accurate, as long as your not stopped. In one of the coolest options in gaming history, you can choose whether or not you want lens flares on or off.  My question: who doesn’t want lens flares.  Each track opens with a cinematic, some graphically more dated than others.  But the scope you get from each one, zooming in on a planet, then showing the track, gets you geared up to win the race.

The camera angles are fairly standard for a racing game.  There’s the preset 3rd person, far angled 3rd person, and S-your-pants-its-so-fast 1st person views, as well and a 3rd person looking-backwards view.   Looking back is useless however because your character is in the way.  If you want to know the other racers’ positions, its much more effective to use the map system.  You can have a line that shows all the racers positions, a box the circles the entire screen with a more detail breakdown of the field, or have a green insert map that shows your general surroundings, including upcoming bits of the track (very useful).    The screen is not too cluttered with inserts, having only key info such as position, speed, and how your engines are holding up.

Repairing your podracer is what sets this game apart from the rest.  You can repair as you race when an area of your engine gets damage.  While you repair, that engine turned off.  When you decide to repair can make all the difference in the game.  One tip I found was repair on corners.  Instead of having to break, you can keep the thrust of one engine going as the other is being repair, giving you some speed and making handling a bit easier. 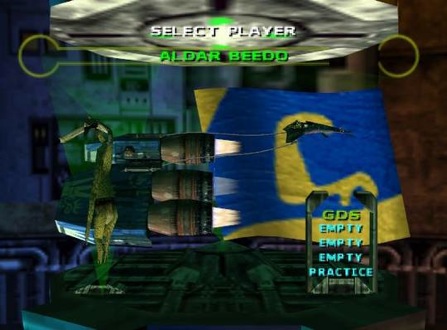 The games main draw is Tournament Mode, where keeping your podracer up to date is the most strategic and important part of the game.  You earn Truguts (aka cashmoney) for every race, more depending on how well your placement in the top four.  You have to wisely choose what you’re going to spend your money on because next race you may need a new cooling system but if you spend all your cash on pit droids, well, your SOL and will have to downgrade.  Difficulty increase feels even throughout.  Sometimes you’ll get you’re butt absolutely handed to you on a track, which means you aught to swap racers to adjust to what you experienced.  Maybe someone who has cleaner turns or perhaps you can afford to choose someone with better top speed even though they drift a bit more.  You’ll be swapping racers often as you unlock new ones by getting first place on courses.  The game is set up in a way that you need to so too much loyalty to a particular character might pigeonhole you in eighth place.

I’m not sure if I’m affected any way by the limited modes because Tournament is so robust and fulfilling.  Free play is pretty fun and less stressful than Tournament but feels useless for one player because you can only play with unlocked racers and tracks.  Its only really useful if you want to try a harder track and set the computers to easy or vice versa.  Two-player mode is a blast!  Beating the crap out of a loved one is truly fantastic in this game because when you shove your friend into a wall, they explode.  It takes them short while to reset, giving you valuable seconds to score a nice lead.  And with every crash may come a screech or a fight from your pal, a good indication of multiplayer well done.  It is a unfortunate that you can only play up two players on a console built for four-way play at a time. 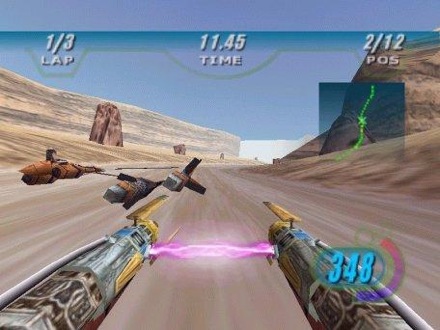 The details make this game for me. The two-headed announcer before each race always makes me giggle with they’re horrendous puns.  The game is filled with nice little touches, like the warden of the prison course Executioner getting booed by the inmates, falling boulders during mountainous tracks, and, losing traction on ice in snowy areas.  One course has a part of the ground crumble underneath you during the third lap.  Talk about unexpected.  None of these things are focused on too much, but that’s what makes it feel unique and in keeping with the Star Wars universe.  Imagine if for every weird alien that passed by, Han Solo did a double take.  The focus remains on racing during races.  You need to worry about that next tight corner, but you can enjoy what leads you there.

Star Wars Episode I: Racer earns an A- for its speed, robust Tournament mode, and fun two-player action.  Only if it didn’t have that bland title…