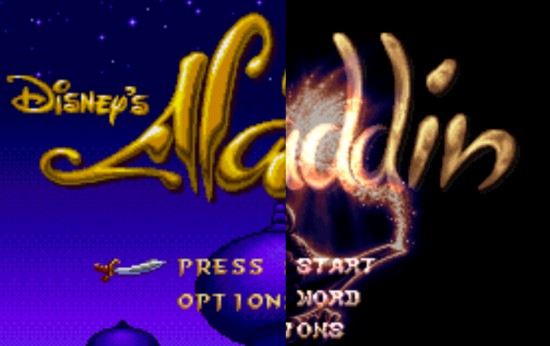 When it was announced that Final Fantasy XIII was to be released on the Xbox 360 nerds threw a shitfit. Gamers are a naturally selfish and inclusive bunch. We don’t like other people touching OUR things! If you want to play Mass Effect, you damn well better buy an Xbox. But how did we get this way? In the old days a game would come out for every platform imaginable. Sometimes completely different developers would make games for different consoles, yielding a unique game all its own. Kids on the playground would talk about the level 3 boss and you’d have no friggin idea what he was talking about.

When you’re a kid, you’re at the mercy of your parents and their wallets. You got whatever they wanted to buy. But now you’re an adult and going back to all the games you’ve missed. Which version of Sparkster was better? Does the music in the SNES Earthworm Jim really sound better?

Developed by many people at Virgin Interactive who would later go on to create Shiny, Aladdin is a Genesis classic. The crew even discussed it as a Sonic Gem way back on episode 10 of the podcast.

Easily the most impressive thing about Aladdin on the SEGA Genesis is the character movement. Virgin had actual Disney animators work on the character designs and animations and it is gorgeous. Not just the characters but everything that moves in this game looks brilliant. The little flourishes like how the enemies explode into a puff of smoke or the items sparkling as you collect them help flesh out the world of this game and bring it to life.

The immersion is also exemplified in the combat. In addition to deadly projectile apples Aladdin totes a sword that he uses to destroy any person that crosses his path. It’s funny how when a property is adapted into a game the first decision is to make the main character into an unstoppable murder machine. Aladdin barely lays a hand on the main enemy of the film but in the game his kill count is in the thousands.

Whereas in most games swordfights are based around dodge, swing, dodge, with maybe a block button, Aladdin really feels like sword fighting. Swinging the sword can lead to clashing between enemy weapons or even bouncing knives back at the baddies. 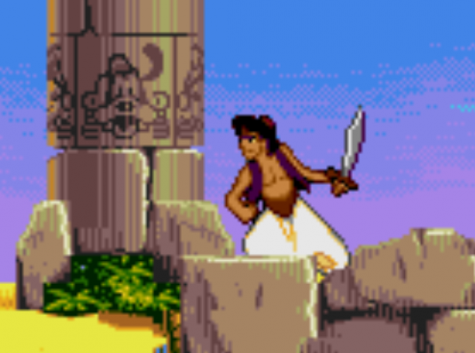 When talking about Aladdin you need to address the elephant in the room, the difficulty. Aladdin is a challenging and engaging game until you get to the Cave of Wonders and then it turns into a deathtrap. That level has gone down in history as one of the most difficult and frustrating levels in history and for good reason. That stage will just eat away at your lives until game over. It wouldn’t be horrible if the game has some kind of save or password function but no dice. A game over is a game over and you get to start at the beginning.

Other than that level, the game is great. It’s gorgeous fun and infinitely replayable.

While the visuals aren’t nearly as pretty as the Genesis version, Capcom’s Aladdin on the Super NES has a whole lot going for it. 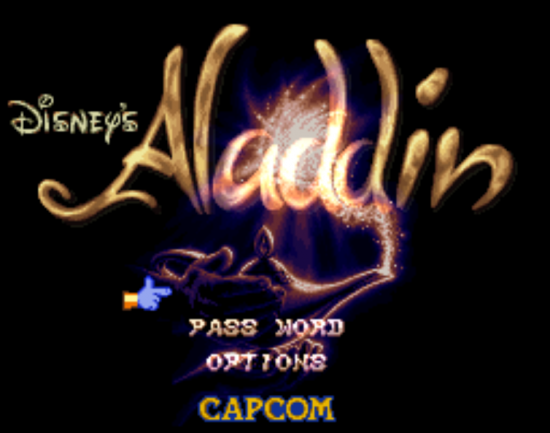 The controls are tighter than the Genesis game and flourish with more to do. Much like the old Prince of Persia games, Aladdin is based around acrobatics. He can climb, jump and swing all over Agrabah. The combat is mostly based around jumping also. Aladdin will flip over the enemies’ heads and squash them like Mario. He also has the apples like the Genesis Aladdin. Jumping on them is really fun, especially when you do it off a pole or high ledge, but it can get tiresome.

The gameplay could really have benefited from some kind of melee attack like the Genesis Aladdin’s sword or even just a punch button. And sometimes the way Aladdin flips off an enemy can be unwieldy and cause him to fly straight into a chasm. He’ll also jump backwards after getting hurt Simon Belmont style. Still, giving someone a swinging kick to the face from a pole is always satisfying. 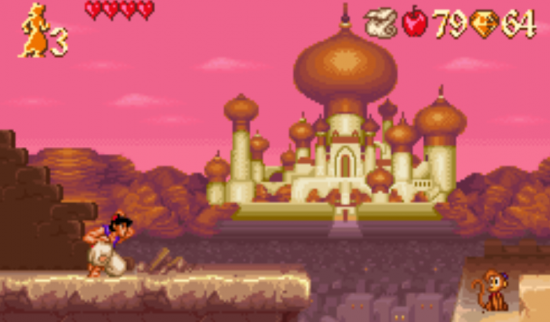 And Abu follows you around at your feet. He doesn’t add much gameplay-wise but watching him catch up to you and run up walls is really neat. And sometimes he even shows you where to go.

Like I said, it’s not nearly as pretty either. The characters are kind of stiff and the animation isn’t as smooth as Virgin’s hand drawn but with the SNES’s more impressive selection of colors, the environments and character models better represent the original film’s aesthetic. Everything looks great in still images but once it starts moving, things get ugly.

In the Genesis game, the environments change greatly from level to level. Even when you move to a different part of Agrabah, the look and feel is completely different. In the SNES version, the levels can get really same-y and feel stale. After the 5th time running through an identical part of the city with the same tune playing on repeat, you can get bored quick.

I think the SNES version just has a more Japanese aesthetic overall. Check out these guys. 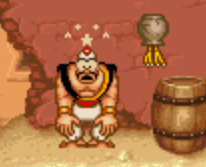 While the Genesis stages are big, they’re pretty linear. With tiered levels and Aladdin’s climbing abilities, the SNES version’s worlds can have a more exploratory feel to them with secret items and areas.

The biggest difference between the two games has to be the difficulty. While Aladdin for the SNES is no walk in the park, it ain’t no slouch. With more continues and easier enemies and obstacles, the SNES version is way less frustrating. The one thing this version has over the Genesis is the password function. While save features still weren’t the norm at the time of this game’s release, especially for a platformer, password features had been around forever. Aladdin for the Genesis not having one is a huge oversight that the SNES version fixes. 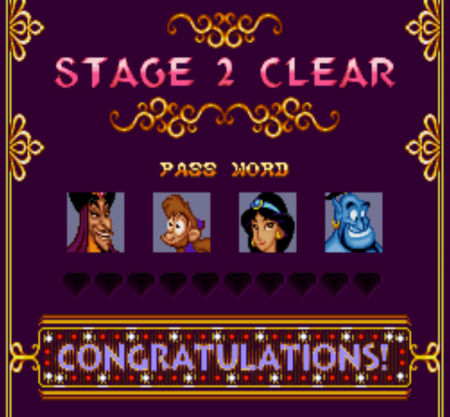 The gameplay is very fun to a point but can get monotonous, as can the level designs. With no bonus levels like the Genesis other than a luck-based minigame, there’s not a lot to spice up the game. And while the Genesis has many different enemies in each level, the SNES version only seems to have a couple for each stage. You’ll end up seeing a lot of the same guy with the same character design in the SNES and they mostly fall into two camps, projectile or melee combat. On the Genesis there are many different enemies, each with their own style and way of defeating them.

The Genesis version seems to have more character in general. Let’s compare a few things. Here’s the death screen from the SNES version: 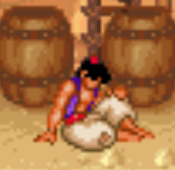 And here’s the death screen from the Genesis version: 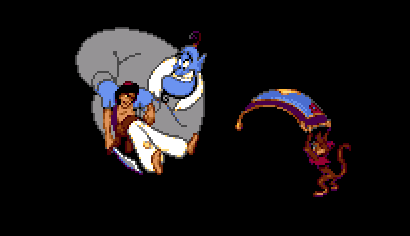 Here’s the bonus stage level from the Genesis: 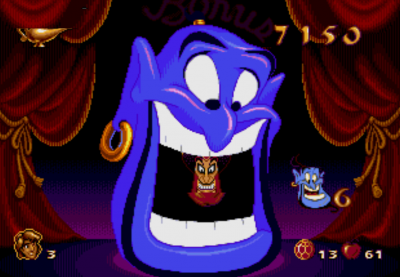 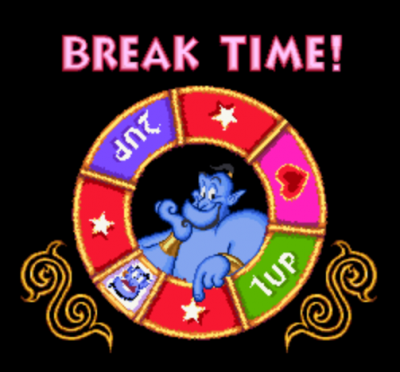 I wish we had more of a combination of the SNES’s graphical capabilities and color palette with the Genesis’s style and nuance but the way they are, I’m gonna have to go with the Genesis. Like I said, I came at both of these games the same way and without bias. I love my Genesis AND my SNES. While I’m a SEGA gamer, more than that I’m a retro gamer all around. 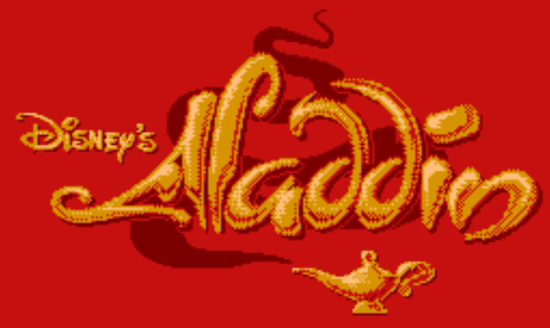 In addition to the Genesis and SNES versions, Aladdin was released on NES and Game Boy. I was going to include both of these in the running but after playing them I decided not to simply because… they’re both abominations. Aladdin on the NES is one of the worst videogames I have ever played. And I play a lot of bad games. It looks like a Tiger Electronics version of the Genesis game only scaled down. The game would be more responsive if I wrote what I wanted Aladdin to do on a paper football and flicked it to a dog with a marker tied to his snout and he drew my request on a whiteboard smeared with peanut butter. 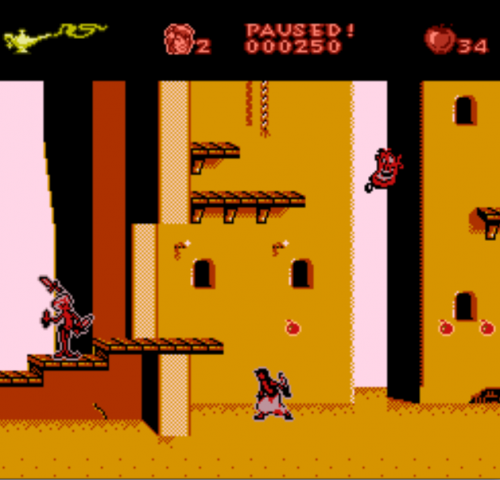 The only way I can imagine this happened is the day Virgin had to send the game out to be manufactured they realized, “Oh shit we need an NES version.” and proceeded to cram a Genesis cartridge into an NES with a hammer. I had chili for dinner and what came out of me an hour later was better than this game. I cannot believe that not only was this made by the guys who did the Genesis version but that it’s playable on the same system as Bucky O’Hare. Anyone who’s even remotely related to the production of the game should be ashamed of themselves.

The Master system version is good, though. I’ll have to do a feature on that one sometime.