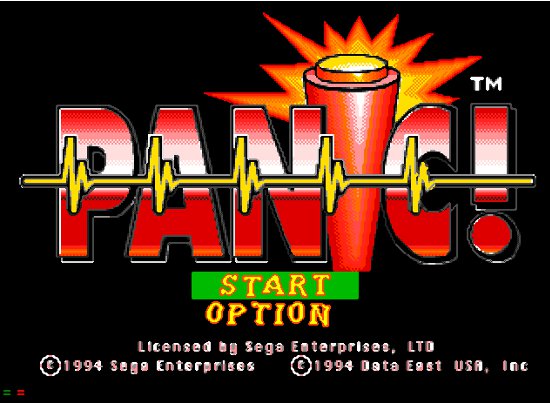 I’m no fan of FMV games, but I understand that they have an appeal. When I played Wirehead, I really didn’t enjoy a lot of the game, but I’ll admit that the campiness made it almost forgivably funny. Panic! for the Sega CD, however, doesn’t have the lovable campiness. So what happens when you take something that is inherently bad and take away all possible redeeming factors? Well, click the more button and find out.

You know those pre-game cut-scene things that no one really watches? Well this game has one of those, but it actually sets the tone of the game really well. When I say that I mean you have no idea what the hell is going on in either of them. Basically the cut-scene is hand drawn and involves people’s machines going berserk. Wheels turning from circular to triangular, elevators shooting people up or down at high velocity, and at least half of the machines throwing up. I’m not kidding; half of this cut-scene is puking electronics. Fucking what? Apparently all of this is caused by a computer virus of some sort. I really don’t think that I need to explain why none of this makes any sense. Computer viruses are pretty non-trivial stuff, but they can only make computers do things that they were fully capable of doing in the first place. One thing they can’t do is make something that probably doesn’t have a computer in it go bulimic.

So when you actually get into the game the experience really doesn’t improve much. Naturally you don’t really play this game in the way you would play a game that has the potential to be fun. All you do is press a button and watch a video. One of my criticisms about Wirehead was that sometimes it seemed impossible to guess which direction to go in. Boy was I naive! This game provides no hints at all, and often all the buttons look the same anyway. In addition to this, you can get up to 14 different buttons to choose from, so you’re probably going to be watching a lot of cut-scenes. 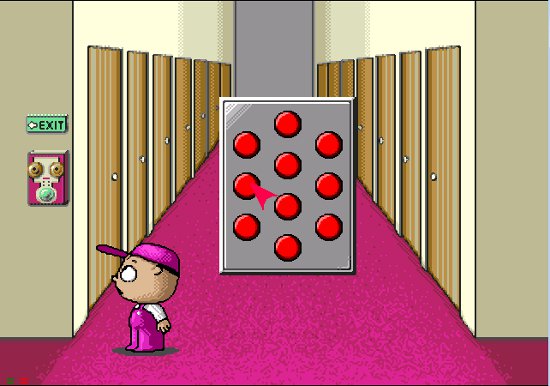 You see that thing on the wall on the left? Those buttons are supposed to be that somehow.

For some reasons there seems not to be any punishments or rewards. Press any button you like and something will happen. Sometimes you get killed, sometimes the machine does something weird, and other times you teleport to another machine, but in either case you just get more buttons thrown at you to press. I’m assuming that it’s bad to get killed, but the game reacts in the same way no matter what happens, and there doesn’t seem to be any life or continue system. All that happens if you die is that the scene resets and you get to choose a new button. That also happens if the machine does something weird.

Occasionally you might trigger a cut-scene that has nothing to do with anything that preceded it. For instance, I triggered one where two babies came out of nowhere, one was Thomas Edison and the other was a light bulb. Edison introduced himself and demonstrated how the light bulb worked. No, I’m not kidding. That actually happened. I have a picture. 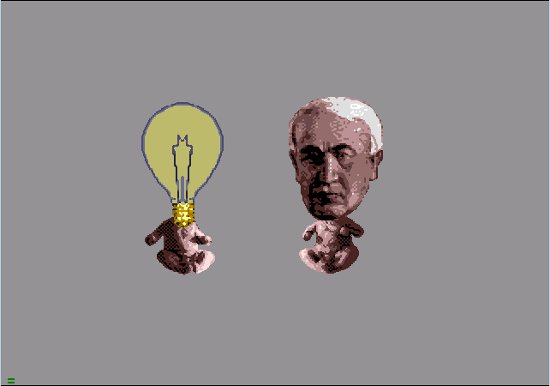 Fucking what?!? I think they also used real sound clips of Edison speaking.

What went through the minds of the people making this game? Who thought this shit up? I don’t even remember how I triggered this atrocity, but I can’t imagine any possible context for it that wasn’t batshit insane. Seriously, if you can imagine a context where baby Edison and baby light bulb come out to demonstrate SCIENCE! then feel free to leave it in the comments, because this just floors me.

Another thing that’s really odd about this game is that most of the sound effects seem to be done by people. I think they actually hired someone to make noises that sound like real things. I would say it was an attempt to save money, but they totally could have just recorded themselves smashing around a few pots and pans for free. I think this was a legitimate design choice that the developers thought would enhance the game in some way. Personally I think it sounds really stupid, but maybe I’m just not avant garde enough.

Despite the zaniness of the game, it’s really not fun to play. No matter what you do you just get more buttons to press. The gameplay never changes, and the deaths quickly become boring and repetitive. The Edison thing only happened to me once; the rest were not as unorthodox and hilarious. In fact that might have been the only time I laughed at all when playing this game. The amount of different possibilities in this game seems virtually endless, but too many of them are just plain boring for it to be worthwhile to play. This is less a game than it is a cruel and unusual way to punish a completionist, or a way to traumatize children. Children, if you’re reading this, I want you to know that no machine will ever purge itself onto you, I promise.

Seriously, watch the intro movie, I bet at least half of the machines are throwing up.