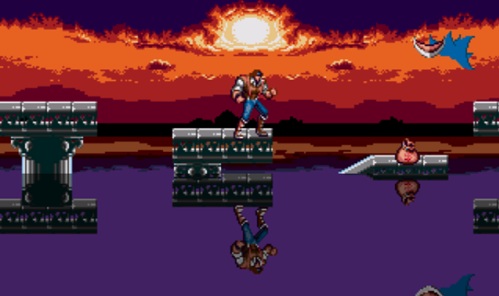 I really have to hand it to Konami. I can’t think of another developer with such a track record of catering for platforms that aren’t exactly the one they’ve seen the most success with. The Contra and Castlevania series were both typically Nintendo properties, starting off on the NES before releasing some of their most memorable titles on the SNES (Depending on how much you like Super Castlevania IV), and yet they still gave at least one game from each series to the Genesis, and both are pretty damn good in their own right. For Castlevania, this was in the form of Castlevania: Bloodlines, released in 1994 and censored as Castlevania: The New Generation in Europe. Censored? Oh indeed..

It’s actually not that violent, but for the time it’s certainly more than audiences were used to. Zombies blow in half before collapsing to the floor, and half-torsos drip blood while chained to the background. It’s nothing on Splatterhouse, but definitely a curious shift in the series, which is a rather apt descriptive for this entire game. You don’t play a Belmont, but rather dashing whip cracker John Morris or Spanish Spearman Eric Lecarde. You only spend the first stage in the ruins of Castle Dracula, instead traipsing off across the world to Pisa and Ancient Greece in search of baddies to best. You don’t even collect hearts to power your sub-weapons, instead using odd red crystals that are actually tallied as blue crystals which would seem a larger continuity error of Eric Lecarde wasn’t illustrated in the intro as having blonde hair before it mysteriously shifts to green in the stages.

The actual mechanics are still the same however. You have a button for whipping (or stabbing), a button for jumping and a final one for using your sub weapons. So you move from left to right, and occasionally right to left killing monsters and smashing candles for ammunition to be ready for those ever so tough stage bosses. Luckily you also have the ability to attack in eight directions, and you can also use the item crash from Rondo of Blood to pull off more powerful sub-weapon attacks at the cost of extra ammo.

You also have three lives as default, and two continues in case you meet your maker (which Eric does spectacularly by impaling himself upon his own spear every death) but even then there’s a password system if you use everything you had left, although you have to start at the beginning of the stage whereas continues will bring you back at the very room that you died in. Handy, as most of these are going to be boss rooms. That’s right, once again we shake our fists at those vengeful Konami bastards for yet more ridiculous encounters. 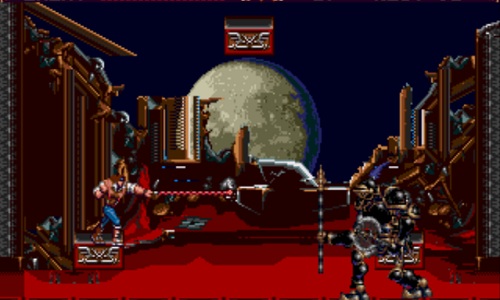 I’m almost certain that the same team behind Contra: Hard Corp also worked Bloodlines, and the proof is in the boss gauntlet. Each stage has at least two boss encounters besides I think the 3rd stage. There’s even a part in Greece where you will fight three bosses directly after one another, which is bonkers. Of course being Konami the bosses are very well designed. I especially love the howl attack of the hound in the first stage, who lets out a terrifying roar that shatters the windows of Castlevania in order to cut you down. The black knight that succeeds him is also well animated, slowly being destroyed piece by piece until he only has legs to hop around with. They later on will certainly kick your ass, the Munitions Factory especially, but overall it’s actually surprisingly manageable for a Konami game. The Japanese release is even easier as your damage output is increased, but I think the difficulty balance is pretty fair.

The stages are a little less consistent, in terms of difficulty and quality. The ruins of Castlevania are a little scrappily designed, and it’s somewhat difficult to distinguish foreground from background. There’s also an over reliance on those irritating ‘lock-on’ staircases from the earlier games, although you can attack from them and you wont be knocked off if you’re attacked which mitigates frustration. What DOESN’T do that are the bloody flying monsters that come out of every gothic orifice after your patience. The bats in stage two for example take a full three bars of health from when most regular enemies only deal one or two damage at the most. Being also the hardest to hit and the hardest to avoid means you might just expend some item crashes out of sheer aggravation rather than economical sense.

When the stages are good though they really are quite spectacular. Each one takes place in a different part of Europe, so there’s a lot more variety than your usual side-scrolling action game. One level you’re climbing the leaning tower of Pisa, the next you’re in the dark depths of a German weapons factory. They each also demonstrate a very cool visual effect, for instance the reflections in the water in Greece above or the exceptional rotary effect that happens as you’re battling the giant bat on a tower atop the clouds, making for very grand boss fight to mark only the half-way point of the game. Music as well has the classic Castlevania tone, although it hasn’t quite survived the jump from the SNES, but it’s favourably comparable to other games on the system.

I think that Bloodlines is pretty unfairly shat upon in the great remembrance of the internet. The series has moved on to Metroidvanias, and Rondo of the Blood or the NES originals will always have the superior quality or greater nostalgia value, but Bloodlines is a really solid action game that demonstrates some incredible comprehension of how to get the best out of the Sega genesis. Something made even more remarkable given it was the only outing I believe to have ever made its way to a Sega system, and given another iteration I have no doubt the sequel could’ve rivalled the usual favourites of the franchise. Instead Konami decided to give the Genesis their very on version of Contra, and we all know how good that turned out to be.

As a man of few wargs, I’ll just say that Castlevania: Bloodlines easily avoids being just another stake in the coffin – B Negative.

Kid Chameleon is back (with some sweet wrap-arounds)