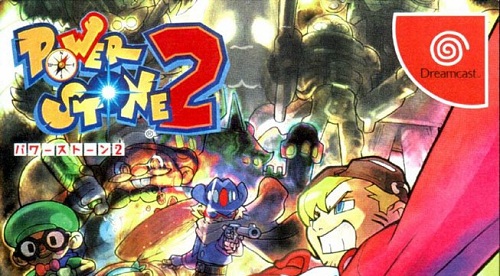 This is one of the strangest fighting game sequels of all time. The original Power Stone was already pretty crazy, with dozens of wacky weapons and characters battling it out one on one, it seems pretty hard to believe that they made a sequel that would take it any further. I’m almost certain that was the development goal at the very start of the project; ‘Let’s take this as far as we possibly can.’

Remember the intense one on one battles? Yep, they’re now four-player encounters, for both all out brawls and team matches. You can even play through the main game cooperatively. The cast of the original game are back, only now with another six additions (although the Dreamcast version does remove Kraken and Valgas again). The three power stones that offered a powerful transformation now total seven in any single match, encouraging a huge competition for control of them. Oh, and the dozens of items to help out in the middle of a fight? They now total 120. It’s a whole new kind of crazy.

All the new character additions are great, especially Pride the father of Edward Falcon from the first game and Accel, a young cowboy who transforms into a giant buzzsaw on wheels. The weapon additions are also very welcome, and while not all of them are as exciting as each other there’s plenty in there to become your favourite. The best part about the weapon system is that you actually have to combine various items together in order to make new weapons to appear in future battles. For instance if you mix a regular common sword with a fire bottle it’ll become a fire sword. If you mix a drivers license with a skateboard you create a scooter you can drive around in. The possibilities aren’t endless, but the whole system is taken much further than the simple unlockable few from the original game. 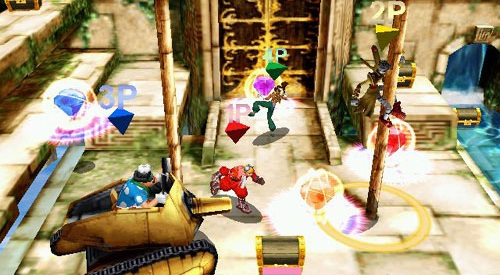 Also fitting of this grander scale are the new stages to fight on. They aren’t simply additions to the original line-up you might find in most fighting games, the entire concept behind the stages have been changed to fit a four-player brawl. Each stage now has a clear progression path, moving players from one area to the next until the inevitable climax. For me these are easily the highlight of the game, as they really stretch the generic conventions of what a fighting game stage is. One such battlefield begins on a flying ship, replete with a mountable cannon to use in order to blast your opponents to smithereens. The downside is that the cannon actually destroys the ship you’re standing on, blasting all the players including yourself into the air plummeting towards the tertiary level. Rather than just falling straight there a number of umbrellas appear, always fewer than the number of people in need of them, and you soon find everyone battling over ownership of it in order to float to safety rather than suffering an embarrassing and certainly painful face plant. The fight then continues along a stream/aqueduct where power ups and weaponry are slowly floating through as you try to claim victory.

Each stage in the game shares this exact progression, but also remain entirely distinct from one another. A favourite of mine is one where you do nothing but ride the top of fully equipped attack submarines in the Arctic, jumping between them to fire volley after volley of ballistics at each other until you finally crash into the ice. If you prefer the more static battlefields however, there are a number of them available to unlock as you play through the main story mode with every character. It’s pretty much the same deal as the original arcade mode, with a mid-boss added in as some kind of Pharaoh mech that’s honestly quite disturbing. You can play through with a friend too which helps to unlock a lot of the bonus content much faster. The real draw for single-player however is the Adventure Mode, where each stage you complete awards money that can be spent on ingredient cards to mix together and create new weapons. You can even find entire cards inside the actual stages you’re fighting in.

Most of the core mechanics still work the same, regarding how the characters fight and transform as well as interact with the environment, but there’s so much added on top of it that it should be unrecognisable. Yet somehow none of the additional element ever look out of place, as if this was always a natural progression for the series despite being such a radical shift in just a single iteration. That said, it does lose some of the intensity of the old one-on-one match ups. The smorgasbord of weapons is exhilarating, but never knowing what could be coming out of the next chest at all also makes the game rather hard to play tactically. When it was just a handful of possibilities it was manageable, but when the same box could present you with a bazooka, a wedding cake or a beam sword it’s a little too chaotic to rely entirely on your own skill.

Nevertheless, I think overall it’s a massive improvement on the first game. There aren’t that many four-player fighting games in the world, never mind just on the dreamcast, and a lot of the attempts made from Smash Bros imitators to Guilty Gear spin-offs have ended in failure. Even if it wasn’t this good it would still be a remarkable achievement, but even today it stands as the exemplary 3D free-roaming fighter.

Power Stone 2 transforms a classic fighter into a timeless masterpiece. No one has done it better. A

Night of the Living Console: Wind and Water Puzzle Battles