Reviewing ports of classic games is a strange thing to do. It’s a weird mix of nostalgia and the modern which makes this especially hard to do. In the end I came to the conclusion that if I’m going to review this properly, then I’m going to have to rip it apart and compare it to the games it’s competing against today, not just be nice to it because of my nostalgia.

From reading the above paragraph you probably think that I’m going to give this port an incredibly bad review. Rest assured I’ve spent a lot of time thinking about this, and I have come to my conclusion. What was my conclusion? What did I think of this game once all pretence of nostalgia was gone? Hit the jump to find out.

First of all, for those of you who haven’t played Crazy Taxi, let me give you the low down. Crazy Taxi is an arcade style driving game, where you have to pick up costumers and drive them as fast as you can to their desired destination. This isn’t as easy as you’d think because there are numerous obstacles in your way, which forces you to dodge other cars and trees (among other things) while jumping off ramps to get bonus points. But most of all the aim of the game is to get as many people to their destinations as you can before the time runs out. 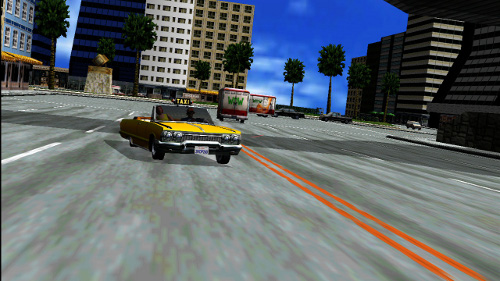 Even by the very description of it, Crazy Taxi is a very arcade based game. There isn’t a story mode and your only objective is to get a high enough score. Thankfully with this port, they have added an online leaderboard which can add a lot of replay value if you’re the kind of person who likes to earn the #1 spot. The amount of value you’ll get out of Crazy Taxi is definitely proportionate to how willing you are to get to that #1 spot. There is a challenge mode with fun minigames to add some play time onto it, but you may not be bothered to do them as they can be frustrating. Suffice to say, if you’re the kind of gamer who wants to ‘complete’ a game and get it over with, then this game isn’t for you. 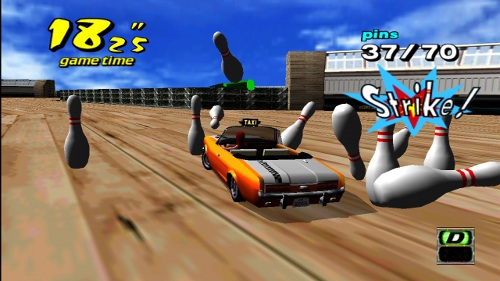 However if you are the kind of person who likes earning points then I can recommend Crazy Taxi. The gameplay is fast and frantic, and quite hard if you’re playing in arcade mode. The controls are slightly off. The reverse button doesn’t always do what you want it to, and it can be quite awkward to reverse out of something once you’ve crashed into it. The controls do take a little bit of time, and can be frustrating, so keep that in mind. The Xbox controller however is a good substitute for the Dreamcast and nothing in terms of button mapping is really difficult or weird. 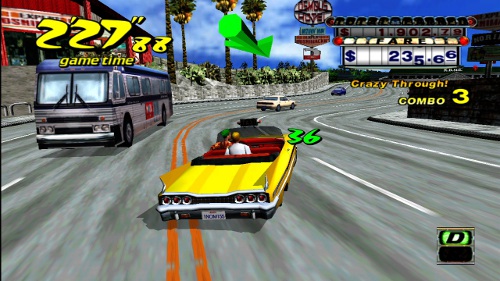 Of course as this is a port, it is practically the same as the Dreamcast version. But there is a big difference. I am of course talking about the music and product placement. I don’t really care about the latter because, all they did was change the name of buildings that were previously Pizza Huts. I’m fine with that. What I do find weird and off putting however is that Sega couldn’t get the original music from the game in this port. And while The Offspring and Bad religion were never the greatest bands, it does take out some of the original ‘extreme’ charm of the game. Saying this, you can create your own custom soundtracks using the Xbox 360 custom soundtrack feature. It’s not all bad, except the music that they did get to replace the original, ranges from bad to forgettable at best. 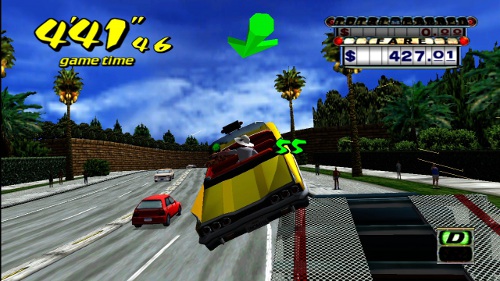 There is also a range of achievements for you to unlock if you desire a challenge. However these achievements are very specific. For example if you get an A grade on one mode, it won’t unlock the lower achievements. Thereby meaning that you’ll have to purposefully be worse at the game to get the achievement for getting a B grade. This does make for some awkward situations as you can never know how to get a certain grade, but it can overall add onto your total play time.

But how does the game live up? Well this is a direct port. This means that Sega didn’t fix any bugs or update the graphics at all. And while I don’t usually complain about graphics, the visuals from early 3D Dreamcast games don’t really hold up. And this isn’t an exception. The people look noticeably blocky. The display however looks good on a modern TV, it’s just unfortunate that the graphics haven’t aged well for it to look good on. Also the numerous (if infrequent) glitches should have been taken out, as some of them can be very frustrating as the taxi will grind all the way across a long fence, simply for bumping into it. 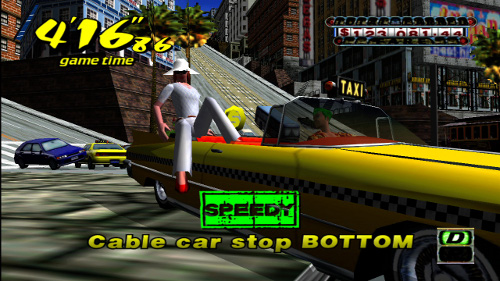 There are of course better games out there for XBLA. At 800 points though this is one of the cheaper games on the service. There are still many games that can give you more for what you pay, considering you could probably find this for cheaper on ebay. I would recommend this for people who have yet to experience Crazy Taxi, but unless you really are dying to put your scores on an internet leaderboard, then I would stick to the original if you have it.

Overall for being a dated (if fun game), for newcomers I give Crazy Taxi a solid B.

The Dreamcast Marathon 8 AM (Pacific) update

Ikaruga is now on Android devices

Daytona USA has a cool dev diary you can watch