The fact that I have just played a new game in the Splatterhouse series is kind of amazing. It’s been 17 years since the last game in the series, Splatterhouse 3, was released for the SEGA Genesis, and the fact that the game is adored by a relatively niche group of gamers makes it even harder to believe that Namco Bandai decided to reboot the franchise. It’s widely known that the games themselves are rather mediocre from a gameplay perspective, but it’s the morbid nature and story behind the games that makes them so interesting. The first Splatterhouse is infamous for receiving a “parental advisory” warning on the cover due to the games violent and gory visuals. If anything else Splatterhouse was one of the first series to really take video games into a darker direction and for that it deserves a place in any horror fan’s heart. 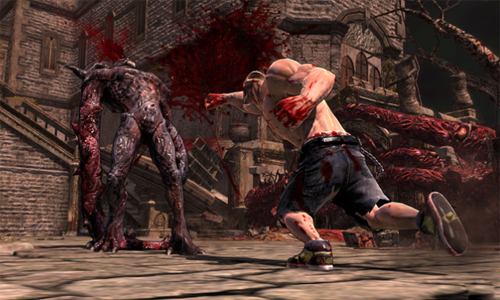 The most impressive thing about Namco’s reboot of Splatterhouse is how well the developers kept the tone and style of the original games. This game is exactly what I wanted a new Splatterhouse game to be and everything just oozes 90’s horror clichés and gore. The main character, Rick, wears sagging baggy jean shorts with a wallet chain, death metal plays in the background, and there’s often moments that feel like they’re ripped straight from an H.P. Lovecraft story. Speaking of death metal, there’s times when Splatterhouse feels like a much more authentic love letter to the metal community than Brutal Legend ever did. If bands like Morbid Angel, Cannibal Corpse, or Bloodbath ever decided to get into game development I have a feeling we’d end up with a game like Splatterhouse.

The gameplay itself is a major improvement from the earlier games, although, you won’t find anything revolutionary. This is very much a hack-n-slash game within the Splatterhouse universe and ninety percent of the game is running into an area, defeating all of the enemies, watching tons of blood and limbs fly everywhere, and then running through the door that unlocked to continue on. It can become repetitive but it’s also the perfect cure to the headache caused from playing to many intense online shooters and mind-numbingly complex SRPGs. 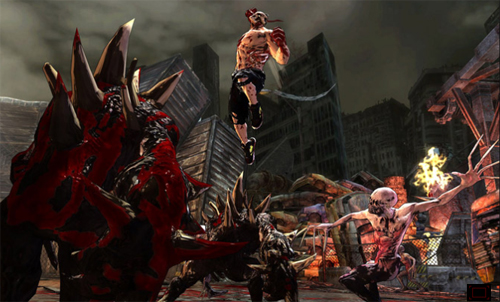 It helps that Splatterhouse has a decent combat system. There are quite a few moves in Rick’s repertoire and understanding when to use a specific attack can make a major difference in whether or not you survive. There’s the basic light, heavy, and grab attacks to choose from but Rick also has a variety of special moves in his disposal that you unlock throughout the game.

Unlocking these abilities takes us to a very important aspect of the game: blood. You’re going to be seeing and using a lot of it. In addition to its visual prominence as you splatter it on the screen and around the environment, blood plays a large role in the actual gameplay as well. For one, blood acts as a sort of currency that is used to purchase new moves and abilities. Want a bigger life bar? Purchase it with some blood. Want to be able to rip the arms off of enemies and use them as weapons? That will be 3,000 bloods, please. As the blood is shed you’ll also notice your Necro-meter filling up, which, allows you to perform many of those unlockable moves, as well as, transform into a much more powerful Rick, a la, Splatterhouse 3. 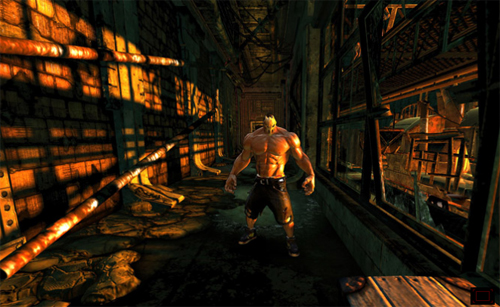 Although most of the game is spent in these 3D beat-em-up segments there is the occasional 2D section that mimics the style of the first two games. Here the focus is less on combat and more on avoiding obstacles and jumping over pits while smashing weak enemies into the background and foreground. At first the 2D areas can be a little frustrating as you come to grips with Rick’s clumsy controls but as I went further into the game I started looking forward to the 2D areas and wished they would have appeared more often. It was a nice break from the monotonous fighting off of waves of enemies. It’s also nice to be able to smash a bunch of enemies with one hit of a 2×4 as some of the latter enemies in the game take a ridiculous amount of time to finish off. Yes, I’m talking to you demonic clowns with your cackling and ability to breathe fire. I enjoyed every limb I tore from your scrawny bodies.

Splatterhouse isn’t all peaches and cream though. For one, the camera often fails in showing you what you want to see and it doesn’t help that you have to take you fingers off of the combat buttons to use the right stick and maneuver it to a more desirable position. The problem mainly creeps up when you’re fighting enemies or bosses who move around a large area and during some of the more difficult parts the camera is the last thing you want to be worrying about. 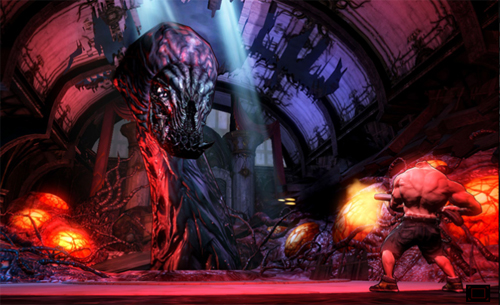 The load times are also embarrassingly long. The one minute load times might be a little more bearable if you didn’t have to sit and wait every single time you died. There’s several times when I would find myself replaying a certain section over and over again trying to figure out exactly what I was supposed to do. The checkpoint was just moments away from where I kept dying but because there was a load time between dying and the next attempt I found myself getting incredibly frustrated. The checkpoints themselves are often, but not always, implemented in a fair manner but it barely matters when you have to sit and wait for the game to load an area you were just playing. Just imagine if a game like Super Meat Boy had you wait an entire minute every time you died. Ugh.

Overall, Splatterhouse is a decent albeit repetitive game. If you don’t find yourself drawn to the tone and setting of the game I highly recommend staying away from this as the gameplay itself is not going to keep you engaged. I do recommend fans of the series check it out though as the developers did an amazing job of keeping the franchise’s style and updating it for the current generation. The game is not as polished as it could be with long load times, some sloppy controls, and framerate drops but if you’re looking for some mindless gore and enjoy the sight of blood and organs spilling from all sides then give the ol’ Splatterhouse a try.

Splatterhouse disembowels the letter B. 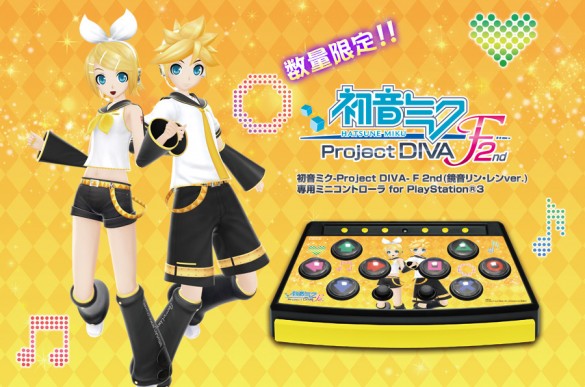