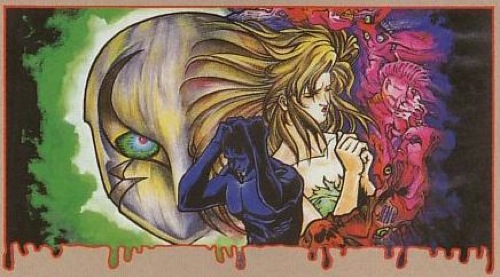 I think anyone will agree the best part of any Splatterhouse video game is the splatter contained within the house.  The green blood shooting from monsters corpses, the rivers of red blood, the spew, the pus, it’s all gravy baby!  The bosses in particular in this series really stand out from the enemies.  No color swaps here friend, each boss is an original nightmare that will make your inner 12 year old boy squeeeee with delight.  Hit the jump to check out my top ten favorite Splatterhouse bosses.

The boss of the first floor packs quite the punch!  ZING!  Any time a physical object flies out of someone’s mouth I am disgusted.  If said object is a bloody fist aimed directly at my face, the feeling is multiplied.  Ugh, I seriously almost got the dry heaves just from typing that.  Moving on. 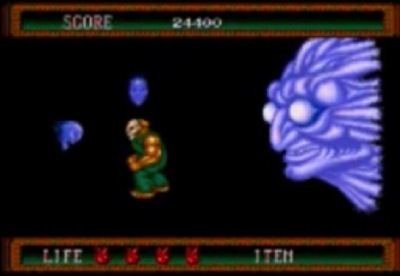 Ghosts are always scary even though I don’t believe in them.  Movies play tthis ghost crap to death with mirror gags and self-closing doors.  But what does Splatterhouse 2 do instead? Puts you in a haunted elevator, send you through a ghost hall filled with spikes and monsters, gives you a bone as a weapon, then has a giant salivating ghost head spit spirits at you.  Why isn’t there a Splatterhouse movie again?

So your girlfriend turns into a demon that immediately starts attacking you.  What relationship doesn’t have its ups and downs?  After you kick the crap out of here, she vanishes into a white wisp of air in your arms.  The worst part is when that little shithead demon comes and points at you before running away.  That alone is reason enough to want to kill the rest of the evil brood.

Fucking gross man.  This is what happens when you don’t get your dog the proper shots it needs as a puppy.  Maggots are the instant ticket to Grossoutville, MA.  Add it to anything for that extra repulsion factor.  Chinese food? Maggots.  Stuffed animal?  Maggots.  Tom Brady’s hair?  Maggots.  Especially to Tom Brady’s hair.

Sack head is a precursor to so many characters, most notably the chainsaw guys from Resident Evil 4.  He also is a rip-off of Jason’s mother’s costume in the original Friday the 13th.  But you know what she didn’t have.  Chainsaws as hands. This guy has a cult following of his own.  You know you’ve done something right when you can stand out from dozens of fleshy baddies. 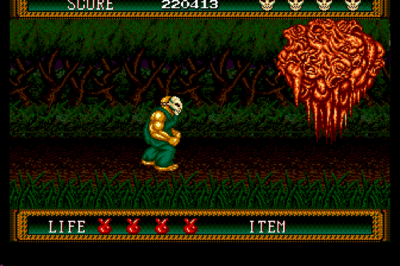 Speaking of flesh, the final boss of Splatterhouse 2 has it in spades.  Pinhead must have stitched this thing together with spare bits that were stuck to the chain hooks from the Puzzlebox.  It is tough as heck to kill.  When it turns into a bat, I lose interest.  How can you go from mound of skin to hell bat?  That like trading in your Harley for a Vespa.  Weak sauce. 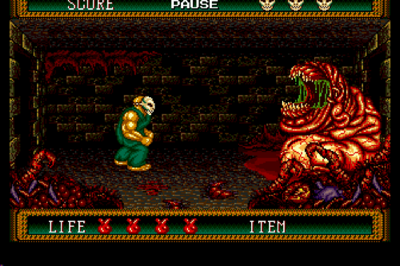 No, I’m not talking about C.C. Sabathia, but the first boss in Splatterhouse 2 (ok, I’ll ease up on the sports references).  While not being to hard, this boss is memorable for its green spit, its girth, and the last ditch attack when its stomach explodes all over you.  ISH KABIBBLE!  (I never said I would slow up on my 1940’s entertainer references, did I?) 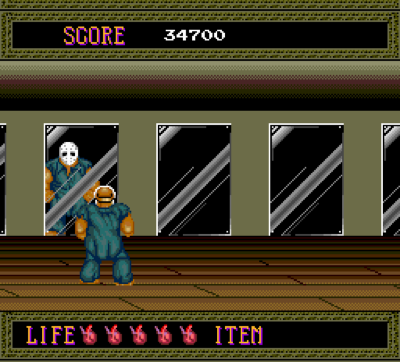 I am a sucker for doppelgangers, clones, and twin villains.  I don’t know why, maybe its because the two sides to every coin idea or the fact that their so evenly matched the fights are always worthwhile.  I think that’s why the Nega Scott joke works so well in Scott Pilgrim.  When Rick has to fight himself, it is so stressful because you never know which mirror will bring another enemy.  Kicking a Mirror Rick into a little pile of dust is pretty satisfying.  If there was ever a better excuse to drop off your mirror at Goodwill, I’d like to hear it. 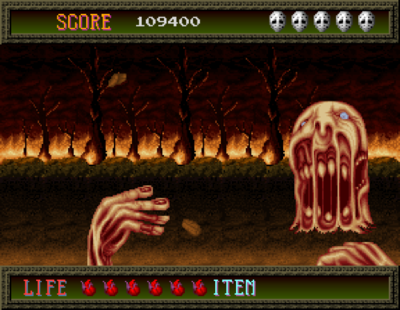 This lad’s melty features have earned him the name Captain Mozzarella.  All you have to do is avoid the hands and punch the head like a whack-a-mole.  Thank goodness he never gets completely out of the ground.  If he were a little less lazy, the fight would be ten times harder.  Then again, he would probably have to be a final boss in a Castlevania game instead. 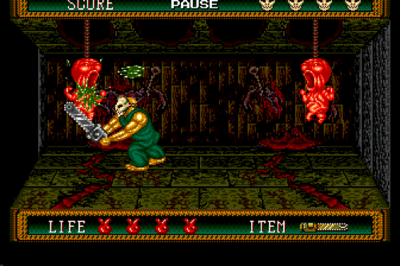 I’m not a big fan of babies.  I am a big fan of taking a chain saw to these guys though.  Their rotting flesh asks to be put out of its misery.  And if the fact you are killing demonic babies with a chainsaw isn’t enough, they are also hanging from nooses.  Wow.  Ballsy move Splatterhouse 2.  I take my hat off to you and then tip it.

What’s your favorite boss?  Did I glance over a festering creature that you think should be here?  Let me know in the comments.  No pardon me, I am in desperate need of Pepto Bismol.