Matt Jay already reviewed this back in October, so be sure to give it a read as it is quite super good. I’m going to review it too, but my Dynamite Headdy is more than a little bit different; Instead, I’m playing the fan-translation of the Japanese release, which has a lot of neat bonuses over the western version. For one, the game is much easier, with bosses being much less of a chore and continues being awarded with a lot more regularity. Hell, you even get to start with two. They also retain a lot of the cheerful quirkiness that got lost in localisation, such as a much angrier replacement for the wonderful henchman/cat Maruyama and other too cutesy omissions that didn’t make the cut.

Dynamite Headdy is an action-platformer sitting comfortably somewhere between Ristar and Gunstar. You’ll do a lot more stage navigation than in most of Treasure’s other side-scrollers, but there’s still plenty of ass kicking to be done. Your only actions are to jump and attack, where attacking actually causes your entire head to fly out in one of eight directions. This can be used to clobber enemies or attach yourself to platforms to either move the object or fling yourself to a higher platform. A very surreal touch here is that you can hold on as long as you want, letting your entire body do something entirely different, albeit powerlessly as its only defense mechanism is gnawing on a ledge.

To keep things exciting, you’ll find a number of power-up blocks to attain temporary abilities that come in around eighteen flavours. Some are specific to certain stages, but they’re always incredibly useful to seek out and have a sort of Kirby enjoyment about them. Sometimes it’ll be a hammer power that shifts your head into a metallic state capable of dealing extra damage, or replace it with a bomb to throw at enemies for a well timed massive attack. Other times it’ll cause you to shrink, which doesn’t help with fighting enemies, but does allow you to seek out alternative routes in the stage. Awesomely, these actually retain the same scale as they did when you were massive, so you get to play a very tiny Headdy beating up very tiny clockwork dogs, which is rather sweet.

The entire game isn’t too difficult, at least in this version, and you definitely get a sense that it’s entirely about enjoying the ride your taken on. The whole thing has a grand theatre aesthetic, as the environments are all bright and cheery, the music is upbeat and pieces of the stage are literally held up by rope and lowered as you progress from area to area. The enemy design is always something silly and enjoyable, sometimes making you fight a massive clockwork dog on a concert stage whilst an entire orchestra is playing ‘The Nutcracker’ behind you both. Level design also demonstrates the Treasure knack of really clever ideas, with one stage forcing you to navigate platforms that are constantly turning at ninety degree angles, so you go from walking on a 2D platform, to suddenly being able to walk up and down on a z-axis like Streets of Rage. 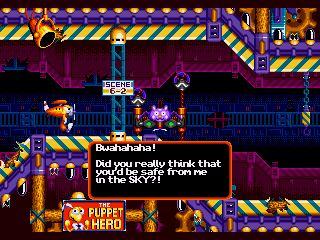 What’s unusual for a Treasure game, at least in the Mega Drive era, is that there is an awful lot of dialogue. Not a huge amount, but plenty of boss fights are prefaced with an introductory taunt or jab. These give an extra dimension to the personality of the characters and the world in which they live. In the western version, Maruyama is just an angry antagonist who attacks without much explanation in a rather pathetic manner. In the fan-translation, he instead comes across as a jealous rival, even referring to himself as Dynamite Maruyama at one point before dragging you through the backstage of the theatre with his one elongated robotic hand. He also calls his ramming attack the Super Burning Fireball, which plays off quite well on how utterly ineffectual it is.

Either way you want to go, it’s a great game that’s criminally overlooked as an incredibly tight, silly and enjoyable side-scrolling platformer. I’d definitely recommend the translated version over the western release for a lot of the altered design choices that were made and to keep all the zany dialogue on for more context of just what in the hell is going on from scene to scene. So long as have a chance to play it through somehow, that’s more than enough for me.

Despite the lack of co-op, and the awkward looks you will be getting from people seeing you beat a puppeteer who is puppeteering his own body to death with your own face, it’s another solid side-scroller that sixteen-bit fans can be proud of. A-