I know, there’s not a person alive who doesn’t like this game. It’s my 100th post, I can do what I want, and right now, I want to tell everyone why this game is amazing. In as short a time period as possible.

What matters is mechanically this is one of the most original titles ever conceived. As best as I can describe it, it’s a two-player cooperative roguelike adventure. You could maybe shoe horn it into ‘that genre that Zombies Ate My Neighbourhood’ is in, but it’s a certainly a toughie. What makes this game spectacular is like most great retro games they’re really good fun to pop in again and relive the experience. What’s completely different about Toejam and Earl is that the experience is different every time. A

ll the levels besides the first and last are randomly generated each time you play, ensuring you pretty much never have any idea where to go. You can find items along the way to help in the form of presents, but no present tells you what they do until you’ve used them at least once and the outcome is randomised each game. Unless of course your present turns out to be a randomiser, which will randomise all the presents in the entire game and you’ll have to figure out what each one does yet again. This works really well, because each time you uncover a present, you find yourself one step closer to accidentally opening a randomising bastard. 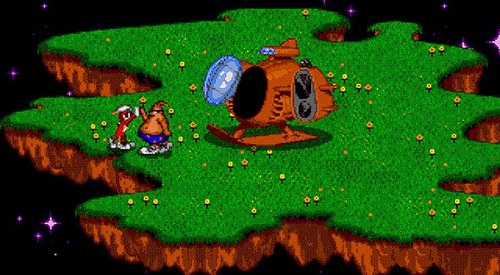 The music is the damn funkiest thing on the planet, and the general aesthetic fits in really will with it. All the land masses look intentionally barely holding together. You’re almost always trapsing across a thin crust with nothing but infinite cosmos all around you. The animations too fit the funk superbly, with both characters either suave strutting or suave sneaking. Probably the most impressive thing is that even though the levels are randomly generated, you still have a goddamn map that slowly reveals as you adventure or receive intel from idle telephones. Which is helpful, as Earth is a terrifying place you don’t want to stay on too long. It’s a world where hamsters in massive balls will try to crush you and mailboxes which usually help you to order in presents with aquired bucks but will instead also TRY TO EAT YOU.

That’s it. That’s all the information you need. I have no idea how the game ends because I’ve never gotten that far. All I know is that there is no part of it I don’t think is designed to extract the maximum co-op enjoyment for both players. From the cool dialogue and exclamations of ROCKET SKAAATTTEEESS to reuniting high-fives after falling down a level to help a buddy get back up, it’s all so well thought out and an incredible achievement for the 16-Bit Era. And I love it. More than anyone else ever. So there.

Single-player is kinda not that great. A

3DS Epic Mickey is a follow-up to Castle of Illusion