Nostalgia is probably one of the warmest and fuzziest double-edged swords gamers can encounter as they mature beyond adolescence into adulthood. Primarily this is because a particular game can be all too easily remembered as being significantly better than it actually was as a player matures and samples different genres to continue altering their gaming palette with age. Other times, it’s simply due to the simple fact that you mature beyond believing that what you are playing is genuinely funny in the least and is better left fondly in the past.

But, as always, I’ll leave you to be the ultimate judge.

Speaking of judge, Mike Judge as many of you will indeed remember is the reason that many of us in our teenage years – and sometimes younger – will happily remember the dynamic duo, Beavis and Butt-Head. Forever doing just about anything from putting condoms over their heads to playing baseball with frogs, the pair of juvenile delinquents were the animated predecessors to the asshatery of shows that would appear years later, such as Jackass. And while they admittedly had a few funny moments, it begs the question as to whether or not the two and their games are best left comfortably in my gaming past.

The short answer is no, but the long answer is a resounding yes.

After all, pick any of the Beavis and Butt-Head titles, which in this case are the Sega Genesis and Game Gear, and the two are nothing more than licensed romps recreating seditious acts that the two perpetrated throughout the run of their animated series. While I fondly remember not only the television show, as it was one of the reasons I begged my parents incessantly for cable when I was a kid, I was entreated to a fresh reminder of the games when I popped them into their respective systems this week after enduring an all too brief search for them courtesy of the internet.

Certainly enough, even in their 16-bit format, the humor from the show is still intact, complete with the otherworldly brashness that earned Beavis and Butt-Head so much laudability from the masses of youth who watched them along with matched contempt from parents who saw them as nothing more than trash amidst the airwaves.  Even the audio queues in-game are a flagrant reminder that there was a time in my life when I happily pulled my shirt collar around my head, thrust my arms in the arm and announced to whomever would listen that I was indeed the “Almighty Cornholio”. But, as I’ve grown, it seems there is a lot to be left behind. 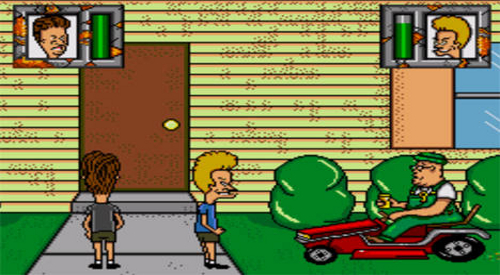 True, the games have held up moderately with age, but this is bearing in mind that you probably remember curling up on the couch in front of the TV to watch Beavis, Butt-Head and the immense amount of crap the two pulled in Highland. Other than that, the games are awful when placed against any kind of modern comparison.

For a game released in 1994, in a decade when we saw games like Sonic the Hedgehog, Battletech and slews of other excellent titles, it’s difficult to believe that this game did anything other than pose as a marketing vehicle for the show, MTV and the lifestyle the two characters in the show purported – right down to being complete morons for the sake of something utterly trivial. In the case of the game, players control Butt-Head and Beavis as they do everything in their power to piece together a ticket to a Gwar concert by doing any number of activities that would surely cause every overprotective mother in the United States to cry herself to sleep cradling their little angels baby blanket. But it isn’t so much the activity as how the game attempts to push them onto the player.

More or less, imagine the worst parts of games like Zombies Ate My Neighbors and add clunky, barely passable controls into the mix and you won’t be too far off. Because the game wasn’t really designed to stand the test of time so much as it was meant to make players feel like they were Beavis and Butt-Head right down to the sheer amount of idiocy the two engaged in on a regular basis. And like many marketing ploys in the history of the video game industry, there is a reason that this one never got a sequel and received multiple simultaneous releases on numerous systems. 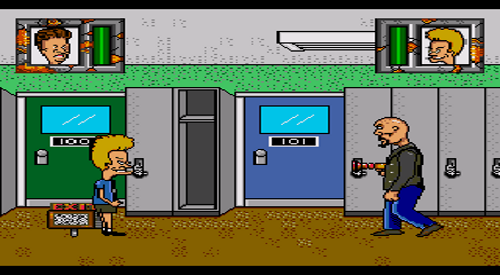 It was a case of developers, publishers, licensers and licensee’s blowing their wad as hard as they could, as fast as they could – otherwise this game would have been a stone cold loss for every single studio that attached their name to it.

Ultimately, it boils down to whether or not you can wrestle with piss poor gameplay for the sake of enjoying a little Beavis and Butt-Head – and I’m dreadfully serious when I say a little. Odds are, you’ll pop this open in an emulator and find yourself aggravated beyond reprieve following the first few gags that will happily harken you back to your childhood in junior high school. For those of you with enough sense, if you miss the pair bad enough, pop in a dvd, enjoy some background noise and move on.