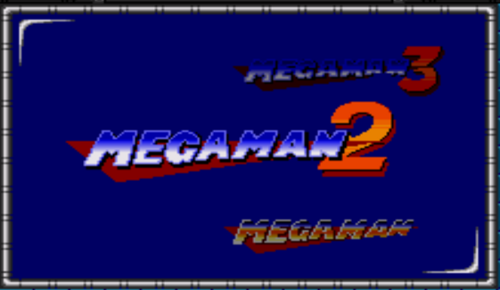 As you may or may not remember, last week I told you the epic tale of The Wily Wars remake of the first Megaman title. Well as promised I have returned this week to give you a run down on the recreated bosses from the second game in the Wily Wars enhanced Mega Drive compilation. Well that was a mouth full.

So enough chit chat, hit the jump to read about the bosses from part 2 of The Wily Wars saga.

So right off the bat, we’re gonna start with Metal Man. Because just like the NES version, Metal Blade is the best (and most cheap) weapon in probably any Megaman game. Metal Blade just about is any bosses main weakness in this game. And why wouldn’t it be? It’s a fucking saw. You’re throwing saws all over the place. You reckless man. Metal Man himself is harder in the Wily Wars then he was originally as he takes a while to kill. However the tactic still remains the same from the original, just keep jumping and firing. 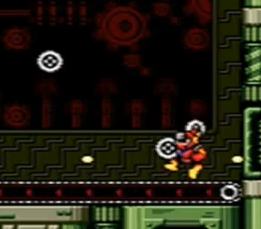 Bubble Man is up now and he really stuck out to me on this playthrough. You see in the NES game Bubble Man is a complete baby and pushover. The designers must have realised this and therefore made Bubble Man really hard. For example he now takes a while to kill and also shoots you with things other than pathetic bubbles. He still looks stupid as hell, mind.

A theme with The Wily Wars actually seems to be making the originals harder. Intentionally or not these boss fights are much more of a challenge then the NES battles that preceded them. However I could be wrong because Heat man is a complete puss. With a couple of bubble’s on him he’s dead. Yeah, Heat Man is killed by some stupid bubbles. Lame as fuck for someone who seems to live in the bowels of hell.

Wood Man is up next and he is very funny as he is literally a piece of wood with arms and legs. His main attack is to leaves fall from the sky and hit you. In theory it’s about as lame as Bubble Man, but because the leafs actually do some considerable damage to you, and Heat Man’s weapon only takes a bit off his health in this remake, he actually proposes a challenge. Too bad he looks, well like that.

One robot master that does seem to be much easier though is Crash Man. Crash Man seems to have traded difficulties over consoles with Bubble Man as you can kill him with three hits of Air Mans weapon. Kind of lame. Air Man, by the way is even harder in this game as he only sticks on one side of the room, so you actually have to work your way up to him to get a hit at him, instead of him just leaping over to you. However with Wood Man’s weapon you can just make him your bitch.

Up next is Flash Man, who in practice also sounds awesome. His power is to stop time. He also looks like a beefy Megaman who just left the gym. Of course this guy can completely destroy you. If you have Metal Blade though (you guessed it) he’s a wimp. Oh well, at least with his weapon you can beat probably the most infamous boss of Megaman 2.

That’s right, chances are you’ll probably face Quick Man last. This could be because (unless you are a master at the game) Quick Man’s stage is amazingly frustrating. With fast lasers that catch you out when you’ve almost made it, one does feel that you’ll never make it. But finally you do, and you get the chance to face off against the bastard who put all those lasers in your path. Quick Man himself is, yeah, fast. He runs around and unlike the NES game, rarely stops. So you have to use Flash Man’s weapon on him, but that still isn’t enough. Usually I can beat him but in Wily Wars it took me a good few tries. Basically, he’s a dick in this game.

And that’s it! You’ve beat the robot masters of this game! But we’re not done yet. While in the castle you have to face a giant mecha dragon, a giant modified Guts Man, and two very annoying puzzle bosses.

In the NES game the dragon made a scary entrance, with the black background and sudden entrance. In this version however he sort of just wonders onto the screen. The boss himself is just the same as the NES game, minus the somewhat surprising entrance. The next boss is just a bunch of random platforms that you shoot. Yeah nothing special. 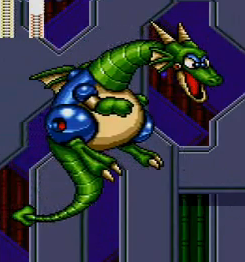 So have you ever wondered what Guts Man would look like if he was a tank? Well wonder no more as he’s a giant boss! That’s right this boss is the Guys Dozer and intimidatingly, takes up most of the screen. You defeat him by jumping on his surface and firing at his face. He doesn’t die that easily in this version of the game, but as we’ve established, being easy isn’t really The Wily Wars bag. The last boss of Wily castle is a fucker who I hate with a passion. This is just a room with random buttons which you destroy with Crash Man’s weapon. Make sure you plan your attacks very carefully as you only have a limited supply of Crash Bombs. When you’ve struggled through that, it’s finally time to beat Wily and end his evil plans once and for all! After you’ve beat all the robot masters again, of course. 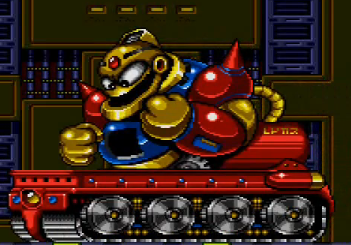 One funny thing to mention about this is that when you fight Metal Man again you can actually beat him with his own weapon. And he dies with one hit from it. Seems he was his own worst enemy. Either way now you’ve made it to Wily’s second incarnation of the Megaman series. The machine itself follows a similar pattern to it’s previous version. It’s attack features giant balls of energy with intricate patterns. Sort of your standard Megaman final boss fare. And here’s when things get weird. When you’ve beat both forms the floor caves in to reveal one final stage and boss. What could this final boss be? Well..

As you can see Wily is actually an alien. Huh. That’s weird. Anyway all you have to do to beat him is use the most useless weapon in the game: Bubble Lead. But for some reason Wily’s alien form is so much harder than his NES counterpart. In this version he is so much faster and can kill you in just a few hits. Luck-ally if you mange to doge him and use your weapon carefully, he will be beat and it is revealed that he was only a hologram. What a twist!

So those were all the wonderful bosses from The Wily Wars version of Megaman 2. Looks like we’re halfway through this series, as next week we’ll be taking a look at the third game in the Megaman series. We’ll be introduced to many new bosses, a few twists and the reveal of a mysterious new main character. Who could it be? Well if you’ve played the game then you’ll know, but if you don’t stay tuned for next week’s instalment of Boss Attack: The Wily Wars.