It’s not often you get to review an eight-years-in-the-making remake to one of the all-time greatest Genesis franchises. It’s even less often that an eight-year project is taken down by the copyright holders days after release. Unfortunately that appears to be exactly what has happened, but at the very least there are still download links floating around to play it if you enjoy swimming through the legally grey areas of gaming sub-culture. I can’t say whether you should or shouldn’t do this, or whether it was right or wrong of Sega to defend their IP from fan-works. All I can tell you is that it’s really pretty damn good.

There are a lot of cut-scenes in Streets of Rage Remake. Around 40 or so. None of them really explain what’s going on, but that’s alright. All you ever need to know is that Mr. X is a bit of a dick, clowns are still mistreating boxing Kangaroos and there may or may not be an alien living in an amusement park. The set-up should be familiar to anyone who has played a title in this series before. It’s a beat-em up taking place on a slightly angled plane, allowing you to move up, down, side-to-side and jump while kicking seventeen shades of red out of all the bad-guys in your way.

For the most part this particular version plays like an amalgamation of all the games in the series. You have your regular combo attacks and back attack, as well as the requisite throwing moves. You also have the Power Meter from Streets of Rage 3, allowing you to use usually health-draining specials at no personal expense, with about two/three per character for any situation. Returning from Streets of Rage 1 however are the police specials, which are screen-clearing bombs that will entirely destroy a full life-bar of all the enemies on screen.

Each of the different systems work incredibly well together, and that’s even more surprising given the cast. Initial characters include all playable cast from the three games; Axel, Max, Adam, Blaze, Skate and Zan. These have all had extensive work on them to balance them out in this new setting, although the variances are a little more obvious on some than others. Axel is mostly the same, with maybe a few tweaks here and there, but Zan is an almost entirely new character. He has a power meter move that fires and explosive bolt, allowing him now to freely use weapons picked off the ground.

Not only that but the character specific weapon specials from Streets of Rage 3 have returned and have been seamlessly added to the abilities of characters who’ve never used them before, letting Zan pull off incredibly stylish attacks with discarded knives and pipes. Adam actually -is- as far as I’m aware entirely new, although he was of course in the first game, and somehow has become my favourite character. He has some incredible reach on his power meter specials, and just in general he’s as much fun to use as any of the regular cast. 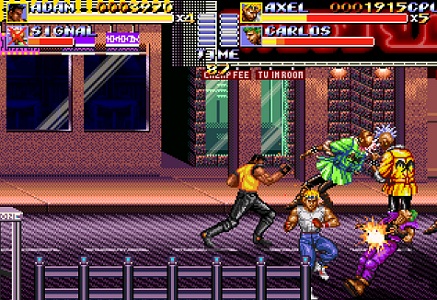 There are a massive number of stages in the game, but really each play-through is about as long as a regular run of a Streets of Rage game, as it’s split into various different paths and routes to break up the tedium. The very first play screen is a map of the city, showing four routes you can start off in. Each of these is a major choice, shoving you down SOR1/2 style routes or entirely original constructions. Sometimes it’s somewhere between the two, like the prototyped motorcycle stages which have returned after being axed from Streets of Rage 3 (If memory serves). There’s a huge range of music as well, with remixed versions of classic Yuzo Koshiro BGM, and it’s immensely satisfying to hear it again after all this time. ‘Never Return Alive’ is still one of the most foreboding Boss BGM’s from a beat ’em up I can think of.

All of this variety is welcome, because there are plenty of reasons to return. I’m kind of rubbish, so despite having played a couple of runs I’ve only completed the game once. This explains why I didn’t realise there are a total of eight different endings, which is reason enough for me to make additional runs. What will really set your blood ablaze is the Shop unlocked by finishing the game a single time on any difficulty. Here you can spend points earned on various extras, although very irritatingly you can only earn points if you actually survive a whole play-through, and the range of purchasable is dizzying.

There are six playable characters to unlock, including old favourite Roo and fascinatingly offensive gay stereotype Ash, as well as options to unlock SoR1/2 incarnations of the rest of the cast. The most expensive character to unlock is an entirely new character based on prototype material, but even the cheapest adds a compelling reason to play-through again. 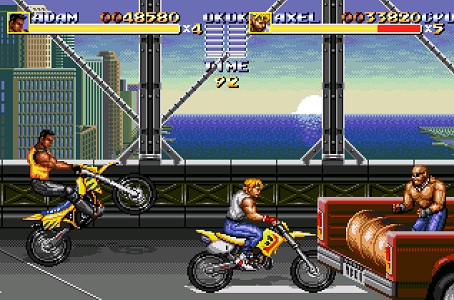 The extras also include various -cheats- in order to spice up additional play-throughs. These including upping your star rating permanently, turning running attacks into entirely different and more lethal, or silly things like changing all the swords into lightsabers or making sure that Blaze’s flying kick lets you see a flash of her panties. I haven’t even touched upon the unlockable modes, so there’s a wealth of content that would be generous in any full retail release. Here it’s nothing but sheer indulgence.

It’s not a perfect compilation, as not being able to score store currency unless you finish the game can mean that looking for an extra challenge could find yourself earning no reward for your moxie. There’s also some awkward additions like blood, which seems entirely out of place although thankfully as a tweakable option if you would argue that people need to be blown to pieces by grenades in your happy fighting adventure. It is however pretty close to unmissable.

There’s plenty of charm and depth to the proceedings that I’m still now learning about, for instance you can actually turn the timer of your PC so that it’s night, and steal an item from the shop which you’ll then pay for by your next play-through, essentially giving you and advance on content. I also very recently shot Cody from Final Fight off a bridge with a machine gun.

Though it has fallen into an incredibly touchy legal situation, I applaud Sega for at least allowing the game to be released in some form. Obviously we’re not going to be giving out download mirrors here, and I hope the situation will be resolved, but either way it doesn’t change the fact that this is one of most feature rich beat’em ups you could hope to play on the PC.

More than an affectionate fan-reworking of a Genesis classic, BomberGames’ Streets of Rage Remake is an essential couch co-op brawler that deserves to be enjoyed. A.