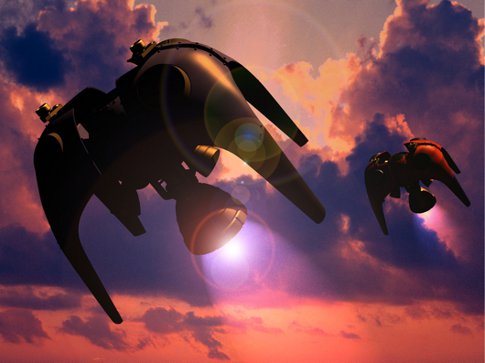 Radiant Silvergun is one of those games that never got released in North America when it was originally created. Many ‘shmup fans were upset with this and imported or pirated the game to get the opportunity to play it. When it was released in 1998 it was touted as one of the greatest shooters of all time. It paved the way for Ikaruga, its spiritual successor, and played a large role in raising the bar for the ‘shmup genre. However, as far as gaming is concerned 1998 was a long time ago and a lot has changed in those 13 years.

How has Radiant Silvergun held up in spite of these changes? Does this HD rerelease of Radiant Silvergun do the legacy of this game justice or has this game’s era come and gone? I guess the only way to find out it to scroll down to the bottom of the page, look at the score I give it and guess based on that. Well actually I recommend you read the full review because this game is going to be very difficult to sum up into a letter-grade, and it’s definitely not the kind of game that would get the same score from everybody who plays it.

Radiant Silvergun is broken down into two different modes of play: Arcade Mode and Story Mode. Arcade allows you to have continues but doesn’t have cut scenes, whereas Story has cut scenes and allows you to stack weapon upgrades through a save feature. Personally I find this very helpful as you only have to play a few times before you’re able to bust into the game with level ten weapons, killing everything (even early bosses) in just a few shots. Also the saves only save your experience totals so you can switch difficulties and combo modes while retaining the same level of weapons. In Arcade you always have to start from scratch, but you can also go in there with 3 continues and 10 lives per continue. I really wish there was a way to add more continues in Arcade so you could just play the game at your own pace and gradually get better. To be honest I could barely make it to Stage 2 without running out of lives. 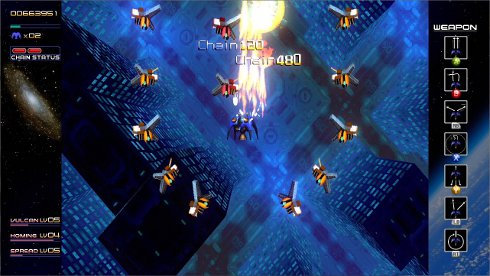 Pictured: Every difficulty mode at once.

One of the main reasons for this is the game’s ridiculous difficulty curve. Even on Very Easy mode this game can be punishingly difficult. This is partially due to the fact that the difficult option really doesn’t do much to change the game’s difficulty. Yes there are notable differences between Very Easy and Normal, and then Normal and Very Hard, but they’re mostly along the lines of either there are a few less (or more) enemies and those enemies fire less (or more). Differences are most noticeable in boss fights, but during the core of the level much is the same.

Of course the boss fights are probably the hardest part of the game, so it makes sense that they would be the most variant between difficulties. To defeat a boss it’s usually a good idea to figure out which weapon (or combination of weapons) is the one that will be most effective against it. That said, there is never a weapon that won’t work, some just work better than others. At any point you could use any weapon you want—this is true for the whole game but especially during boss encounters. All bosses have multiple parts which you can destroy before the core of the boss for a larger point bonus; however, if you so choose you can begin slaying the core of the boss immediately and defeat the boss more quickly. Each boss is unique and interesting to fight so each one provides a new experience for the gamer.

Radiant Silvergun is more than a game about boss battles though. Each stage feels very unique from the others and the patterns the enemies come in are always quite varied. You never really sit there thinking “oh this is familiar,” which is made more incredible by the length of this game. In total the game has six stages which are further broken down into levels. The first stage you play has a total of five levels, all complete with unique enemy patterns and bosses. It really makes you sad to get so many game overs because you’ll want to experience more of this game’s world. How many vertical, rail-based games is that true for? 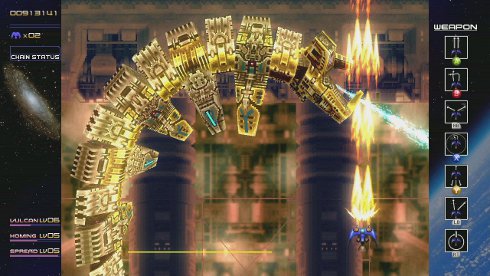 I think the main thing people will take issue with will be the game’s difficulty. As I mentioned, this game punishes you. That said it’s not an unfair difficulty (it is definitely all about skill) and you can definitely tell when your skills are improving, but even in the very first stage you can tell whether or not you’re going to make it very far. For people who haven’t ever played shoot-em-ups before it will be fairly difficult to just jump into Radiant Silvergun. I have played a few shooters and I still find the game incredibly tough. To put this into perspective my average Arcade Mode game lasted one minute and forty-seven seconds, while my average Story Mode game lasted two minutes and nineteen seconds. The good thing though is that once you get it you get it and you should reasonably be able to make it pretty far. The game is heavily pattern based so if you start to pick those up you should be able to clear the first couple stages without losing too many lives.

If you’re someone who wants to amass a huge combo then Ikaruga mode also eases the difficulty to a certain extent. Radiant Silvergun’s traditional combo system awards you more points if you keep killing enemies of the same colour. If you shoot an enemy of a different colour you lose the bonus you were building. Ikaruga mode gives you a bonus for shooting any three enemies of the same colour, but this bonus can be built up with different coloured groups of three. I find that this game loves sending enemies in groups of three, so in Ikaruga mode you can easily build up a large combo without even thinking about it. Messing around with the combo systems is a lot of fun and though it doesn’t totally rework the game it does add a new element to it that people who have already played this game in the past might find interesting.

Visually the game could probably have used a better upgrade than it got. The game’s graphics are very true to the original versions, with a few minor changes. The actual game part of the screen is completely clutter free as the score, chain multiplier and weapon info are all moved to the left side of the screen. On the right side is a list of weapons, their function, and the button which fires them. This is an invaluable tool as having seven weapons, each mapped to a different button, can be confusing without a handy reference guide. It looks like everything is much less pixelated as well. Overall the graphics aren’t horrible, but they certainly aren’t stunning. They don’t detract from the game experience, and I never found myself confused about what was what on the screen, so I think graphically this game does all it needs to do, but there’s no denying it looks old. 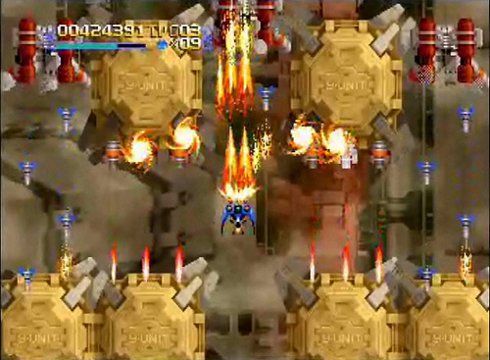 This is a screen shot from the original, so you can see there have been improvements, but you can also see the similarities.

Radiant Silvergun has a story, and from what I can gather it’s quite interesting, but it’s very difficult to understand anything because the voice acting is all in Japanese and the subtitles come up right in the middle of the action so it’s very hard to pay attention to them. Of course, a game like this is not built around a story, so this did very little to ruin my experience. It is a shame though because the game is set up in a non-linear way in that the levels you play did not happen in that order chronologically. The game is very overt about this as the level you play first is level 3A. Level 1 is actually the last one you play. This kind of non-chronological story structure is something I find fascinating, so it’s really a bother that it’s so hard to absorb it. But on the other hand, I would rather have this than some new and likely awful English voice acting. Could you imagine the outcry if they did that? Given that this is the first time the game was released in English I’m sure the story is non-essential, but it’s a disappointment for me anyway.

Radiant Silvergun may not have the most cutting edge graphics, and it’s difficult curve is more punishing than the State of Texas, but overall it’s still one of the best shooters out there even after all these years. It’s not a game for everybody, but those who would play it will love it. Playing it makes you feel bad for the people who never will. A-