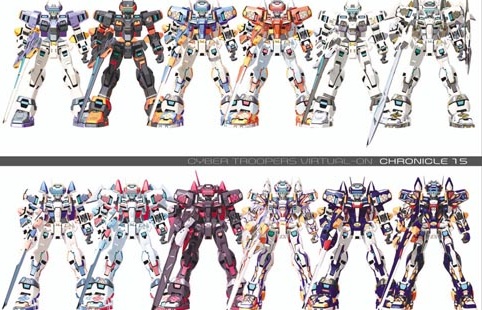 Is the appropriate internet vernacular ‘HNNNGGHHH’? these days? Undoubtedly this is one of those limited editions that just screams ‘In your face, digital downloads!’. Purchasers of the Limited Edition version of Virtual-On Force this December in Japan will receive a lot more than just a fancy cardboard sleeve and some lenticular art. To start with, there is a 6-CD Music Set featuring tracks from Oratario Tangram, Marz, Force and even the 1995 original. Then there’s the 140 page art book celebrating the 15 years anniversary with artwork throughout the series and interviews with the prolific staff such as Hajime Kotoki who is responsible for the designs of the Virtualoids.

On top of THAT, Hajime Kotoki is also drawing the new cover art just for the Memorial Box edition, and there’ll even be two Tangram Super Balls included to finish off the set. I have no idea what the hell a Super Ball is, but it sounds pretty awesome and if it means I can play catch with that terrifying eyeball planet then I’m all for the inclusion. The weirdest extra that’s also included as just a pre-order bonus for both editions of the game is a ‘FETISH UNLOCK CODE’, which allows you to change the bust size of some of the female mecha in the game.

That’s probably the weirdest/greatest pre-order bonus I’ve ever seen. At least unlockable guns in third person shooters stops the ‘Mine’s bigger than yours’ enhancement at the metaphorical level. The Memorial Box goes on sale December 22nd at just under $140 dollars and will be entirely unplayable for anyone who doesn’t have a japanese Xbox 360 in their homes.