Over the years, Sega has developed the reputation of releasing countless uneven classic collections. Time and time again, some of the best entries in Sega’s vast library have been inexplicably ignored, brushed aside for a glut of tired and easy ports that have already been released several times over (I’m looking at you, Sonic 2). With that in mind, it’s not surprising that something as unessential as Sega Bass Fishing made it onto the long-awaited Dreamcast Collection earlier this year.

To be fair, I had never played the full game before this review, so I hadn’t really earned the right to judge. It’s just that the concept of an arcadey fishing title taking precedence over something as unique and resonant Jet Grind Radio or Chu Chu Rocket is nothing short of bewildering to me. Now that Sega Bass Fishing has received its own Wii/XBLA/PSN release with motion control support for all three systems, I finally get to see if this game has earned its place on the Dreamcast compilation that I had been anticipating for years. Hit the jump to find out. 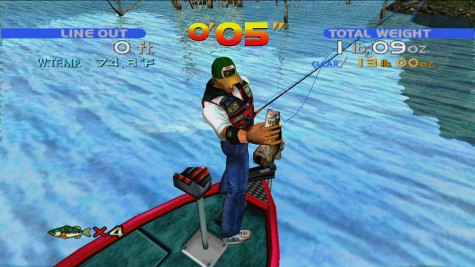 As with just about any arcade-style Dreamcast game, Sega Bass Fishing’s gameplay is exceedingly simple. Select one of a handful of lures, select a bass-filled body of water, cast your line, then reel it in strategically based on the lure that you’ve chosen. Some lures work better if you reel them in slowly. Some work better if you jerk them around or drag them against the ground. That’s just about it. As you might expect, Sega Bass Fishing drops just about any intricacy in favor of a snappier, simpler fishing experience that’s driven less by the unlockable lures and bigger fish and more by the ominously ticking clock. Much like Crazy Taxi, the gratification of working to extend your time can make for some very fun and intense moments, tinged by that addictive little spark that makes you want to pick up the controller again a few moments later. The gameplay is easy fun (if a bit repetitive), and strategically selecting lures offers a pinch of extra depth to a game where the only goal is catching a single type of fish. 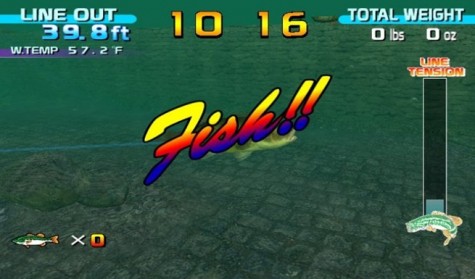 Back in the days of the Dreamcast, one of Sega Bass Fishing’s unique draws was the addition of a fishing rod controller, which allowed you to literally cast your line and reel it in. With the addition of motion control support, Sega has once again offered us the chance to play the way we used to play. Unfortunately, The Move only partially delivers on this promise. The connection between your actions and the results onscreen occasionally feels rather tenuous, but the controls are so basic that the occasional flailing rarely gets frustrating. In addition to some touchy control issues, Dreamcast diehards will also likely lament the loss of an actual reel on the controller. It’s a superficial complaint, one that didn’t stop me from switching over to playing with the Move for the bulk of my playtime. I just really enjoyed the ease and novelty of it all.

Further adding to the novelty is the hilarious announcer. Perhaps it was unintentional, but the awkward and relentlessly upbeat pontifications he makes are probably my favorite bits of the game. I challenge you not to chuckle the first time he tells you to select a casting point or lure. It adds a level of personality to a game whose genre is kind of notorious for being as interesting as old bath water. Once again, I was reminded of Crazy Taxi, another game whose done-to-death genre has been gleefully tweaked to make it something unabashedly fantastical in the name of whimsical entertainment. 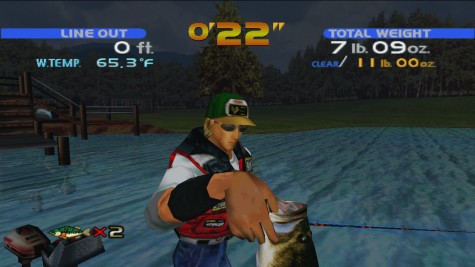 Unlike Crazy Taxi though, Sega Bass Fishing’s gameplay isn’t unique or addictive enough to warrant such an short list of gameplay modes. When you boil it down to the sheer basics, the experience is undeniably shallow, especially in terms of replay value. The Original Mode, which could have served as a nice impetus for continued investment, can be burned through in less than an hour. Unlockable goodies like lures and fishing areas are appreciated, but these rewards are surface-level at best, and do nothing to further hone your skills or improve your chances of catching fish.

The visuals are similarly disappointing, especially considering that the rest of the presentation is so refreshing. Since this was the only element of the game where the developers decided to employ realism, they come off as extremely dated and forgettable. The only real flair comes with an ominous castle stage at the end of the game, which offers a brief respite from the boring and unvaried environments you’ll be playing in most of the time. Inspired bits like these are few and far between, which is saddening, considering that a stronger commitment to the over-the-top sound design and arcadey gameplay could really have helped to pull Sega Bass Fishing above being a simple, unnecessary rerelease of a eleven-year-old fishing title. 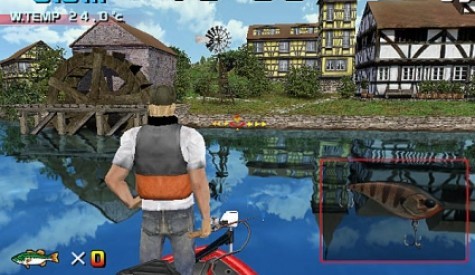 To be honest, I’m still rather perplexed as to why this game is still considered to be so relevant today. Unlike most Dreamcast classics, Sega Bass Fishing suffers from being in a genre that has since been improved upon and updated for years now. The real draw of the game comes with its unsophisticated presentation and simple gameplay, but even that eventually wears out its welcome. To be fair, there’s some real fun to be gleaned here, but unless you’re already a fan or are looking for something to do with your Move, it’s probably not worth the current price point.

Sega Bass Fishing is an example of one of the few recurring problems in the Dreamcast library – fun that’s simple to a fault. C.

Dreamcast Collection gets a trailer