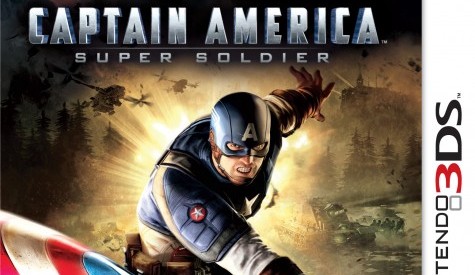 It’s been quite the busy year for Sega on the superhero front. With a total of five different titles released between them, both Thor and Captain America have been given several chances to prove their worth to gamers. As most would expect from your average licensed fare, these games almost consistently fell flat on their chiseled, manly jaws with awkward gameplay, terrible graphics, and tepid presentation.

Now, we’re at the end of this spate of superhero movie releases. Captain America is once again up to his old tricks, this time on the Nintendo 3DS. As with the Thor before it, this 3D-enhanced game is being released several months after the film, but is that extra development time enough to take something as bland, repetitive and boring as a licensed superhero game and transform it into something worth more than a passing glance? 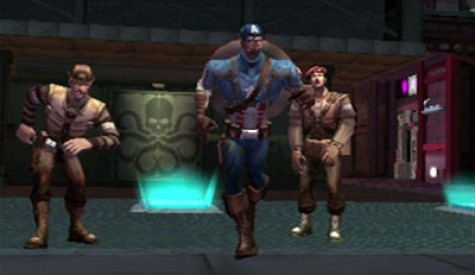 If there’s one thing that this game needed to get right, it was the combat. No matter what works in a superhero game, you have to hit those notes of empowerment and excitement well before you try anything else. Despite some occasionally cheap and overly difficult enemies, I have to admit that Captain America: The First Avenger does achieve this task rather admirably. It’s easy to string together standards like punches, kicks, reversals and blocks, especially in the early portions of the game when your foes are at their most basic. Cap’s moves are accompanied by some solid animation, lending him a genuinely powerful and speedy feel, at least in the confines of hand-to-hand combat.

It’s a shame that Captain America’s real claim to fame (his shield, of course) isn’t nearly as intuitive or fun as it could be. While you are offered a handful of clever little tricks like deflecting bullets to kill enemies or throwing your shield to destroy several targets at once, performing them can be a bit of a chore, especially when you are constantly required to utilize the unreliable touch screen. The game would often lose track of my fingers in the middle of targeting something, and I’d keep finding myself struggling against a wave of oncoming bullets just to knock a single enemy unconscious. Once you’ve gotten used to its flaws though, it can be quite fun to destroy bits of the environment or send sticky bombs back at the enemy using your giant metal frisbee. In the end, most of the entertainment I gleaned from this game came from fiddling with this invaluable tool. 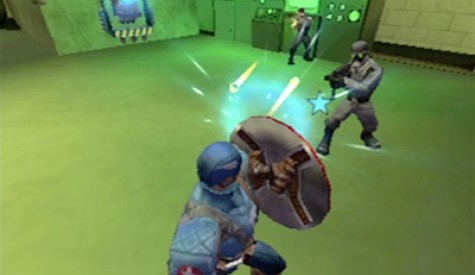 Still, somewhere between the punches and kicks and disc-throwing, Captain America 3DS starts to fall apart. Stages consist almost solely of silly, sometimes irritating puzzles (which almost always involve turret guns and lasers for some reason) and horribly unforgiving and imprecise platforming. I use the term “platforming” loosely, as the game basically guides you from jump to jump, stripping away any real strategy as you try to climb higher and higher in the same blocky, crappily-textured room. Jumping around is somewhat clunky, and even with the game holding your hand, it is more than willing to let you run right off of a platform or cable, forcing you to start again from the beginning. These bits are tolerable as little supplements to the rest of the game, but as you dig deeper and deeper in to the campaign, they become needlessly complex and boring, and almost completely overtake the bulk of the gameplay.

What sticks with me most about Captain America’s campaign is its slow decline from decent to “meh” to dreck. The first few stages inspire a surprising amount of hope, with some unique and interesting environments, some smooth and relatively fun combat, and a little bit of enthralling music. Heck, even the first boss hovers right above mediocre. Once you get past the third level though, the game’s promise slowly gets stripped away before your eyes to reveal something criminally sloppy and horribly produced. Bosses become impossibly cheap and unbalanced. Horribly overpowered enemies are introduced, like giant lumbering robots that absorb and deal out far more damage than is necessary. This is all worsened by the broken checkpoint system, which kept sending me so far back that I’d have to fight off three or four waves of enemies in several different rooms before I even came close to facing the enemy that killed me in the first place. 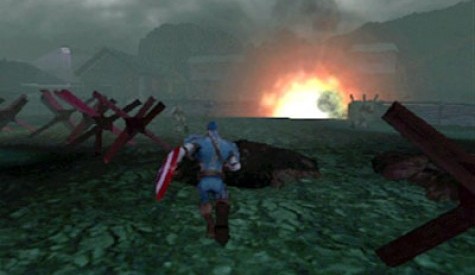 The presentation, much like the rest of the game, never crawls beyond mediocre, and occasionally dips into horrendous. The music is epic and sweeping, even if it only consists of one or two tracks. The voice work is usually uninspired and often quite laughable. The visuals are uneven, but not consistently terrible. Environments are varied and generally look somewhat appealing, even if the textures are occasionally a little muddy. Character models, however, are blocky and usually ugly as sin. Even Cap himself looks hilariously grotesque, with a face more appropriate for Harry Potter’s Wormtail than the dreamy hunk that is Chris Evans. Adding insult to injury is the rampant screen tearing you’ll see in the second half of the game, as well as a hefty helping of graphical slowdown in rooms that are filled to the brim with enemies.

In the end, it’s hard not to label this as yet another reason we should all ignore licensed games. There’s so much potential here, and for awhile, it looked like the developers had a solid grasp on what could be done to set this game apart. The combat is fun, and fiddling with Cap’s shield offers a little extra flavor to a generally lukewarm genre. Apparently though, the developers’ grasp was far too loose, and the game that slipped out became a sloppily designed, needlessly difficult mess.

Captain America: The First Avenger boasted a bit of potential with its first few stages, but the constant repetition of boring puzzles, bland platforming and insanely cheap bosses and enemies quickly dragged it down well below mediocre and into the trenches.

For this, Captain America: The First Avenger gets a D+. 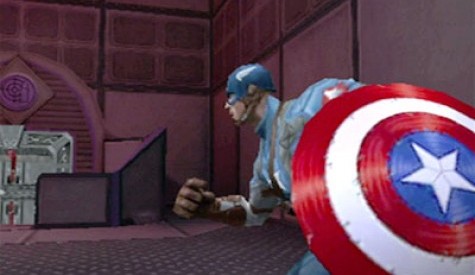 Movie tie in games don’t have to be bad. In recent years we actually have had surprisingly good games based on movies that have come out in the same year. Even the console version of this very game is supposed to be decent. However this is not a review of that game, but instead a second opinion of the 3DSCaptain America game. Read on for my thoughts.

In my humble opinion there’s a very thin line between dull and bad, especially in game design. Some games can go from being just plain dull to painful in a very short gap of time. Captain America epitomized this logic as the game design starts off dull, and gets worse from then on. While the first few stages show some promise the later levels descended into unexciting and frankly annoying puzzle based switch rooms. This didn’t really gel well with the beat em up styled gameplay that came up before as I soon found myself just wanting to beat something up.

That’s my main problem with Captain America for the 3DS. It just doesn’t know what it wants to be. Certain sections make it look like a bland platformer, where many times it will go back to being a bland brawler. This made the game feel very incoherent which in turn made many levels drag on.

The levels however aren’t as bad as the bosses. Sticking true to the design I mentioned, while the earlier ones were a breeze, with the later bosses I really didn’t know what to do. In fact half way through the game I was presented with a boss that required me to use the touch screen when I had never been asked to use it before. Suffice to say I was stuck on this boss for some time until I ended up grasping at that straw. A terrible experience indeed. 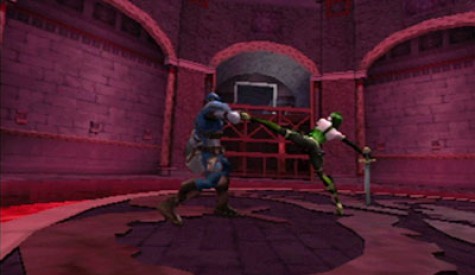 The presentation of this game however did show promise. With stars and stripes erupting from your special attacks I thought the game would treat me to some over the top visuals mixed in with a 1950’s steampunk feel. However the steampunk feel is soon traded in for more drab colour palettes and grey corridors. It really feels like a lifeless game in that respect as each level looks more plain than the last I could actually feel the creativity drain away from the project.

There is some effort put into the 3D visuals but I’m sorry to report that this rarely adds much, and in some aspects hurts the game’s graphics. Some of the 3D is really shaky and my eyes could never adjust to it. There are some really bizarre attempts at using the 3D to create some striking imagery but it just looks flat. If this was the game to prove that 3D could change a game then it desperately failed. 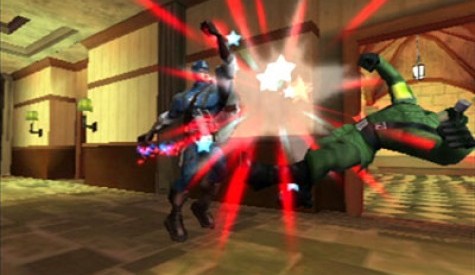 I could go on about how the voice acting is bland, how the graphics fail to impress and how the laser based puzzles just didn’t work in a 3D space but it all seems pointless. Is a movie tie in game sucking really a big deal? Should we care? Well I for one do because it’s a real shame that good talent was wasted on this project. The work of designers and programmers was wasted because of some arbitrary release date that they had to push for. What could have been a surprisingly decent counterpart to it’s console twin is now just a bargain bin relic left forgotten and cold.

Thunder Blade is the next 3D Classic in Japan