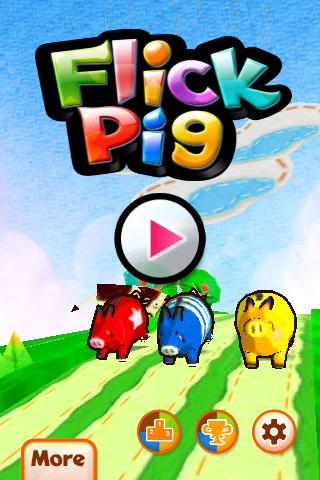 Flickpig is one of those names you can only imagine an iOS or Android game could have. It’s pretty much the instruction manual for the game: You flick your finger in order to move a pig. As far as titles go, this is „Cut the Rope“ territory. In many ways, the latest title by Prope evokes the most fundamental qualities that made hits like „Angry Birds“, „Cut the Rope“ and „Tiny wings“ so popular. Hit the jump to find out which these are…

Simplicity is key when designing a game for the iOS or Android market and Prope certainly realized it, because at the very core of the game lies a very simple mechanic that I already described in the opening paragraph. That does not mean that Flickpig isn’t a challenging or deep game. What it does mean is, that everyone who picks it up will know how to play it. You have three pigs, everyone in a different color, that run ahead in three different tracks. Via a flick you can move pigs from one track to the other and even staple them. Most of the times, you do this in order to evade obstacles or in order to get coins. Most of the times, you try to do both. 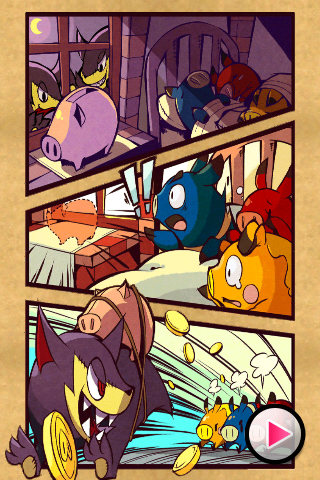 While there isn't much of a story here, it's presented well

The presentation is simple, yet charming. The engine gives you nice 3D models with a great level of stylization and detail. Unfortunately, it also had quite some performance issues on my 3GS, which led to some unnecessary dangerous moments as the framerate drastically dropped and I wasn’t able to move a pig in time. My hope is that they will address this in future updates. The music is nice although forgettable and soundeffects are fittingly comical. Overall, the presentation is rock solid and quite typical for games of the platform with it’s cute and simple aesthetics. 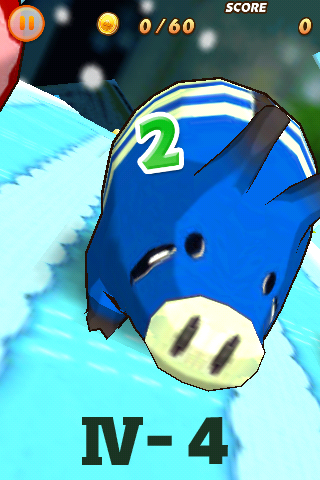 There are 60 normal levels, spread across five different worlds that have varying background settings. The difficulty climbs adequately and the game introduces new obstacles at a good pace and gives you time to form strategies. There are fences, which you can’t jump over if there’s no pig in the track you want to jump to, spiked fences that you can’t jump over alone, wolves hunting you, exploding boxes and many more. Each of them challenges you in unique ways, but you will still be able to make it through the original set of levels in one or two hours. 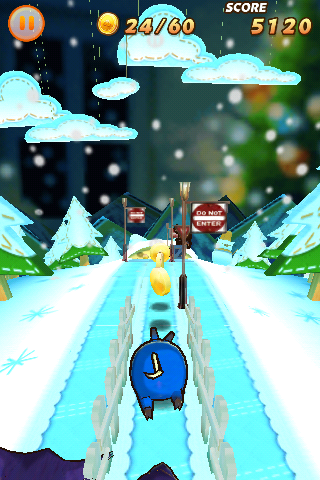 Every world has its own theme

However, making it through the levels is only half the story. During the levels, you gain stars which correspond to your performance. If you hit a certain number of Stars, you gain access to so-called “EX” Levels. Those levels are really hard and a real challenge, but there’s a huge feeling of satisfactions if you actually make it through. It’s a great optional challenge and adds to the replay value. Oh, and those coins you collect during the levels? You can use those on various items that can get you through hard levels or optional stuff, like additional costumes. Overall there are 100 levels and I think it’s possible that Prope will add more as time goes by. Even now, the game is well worth the buck. 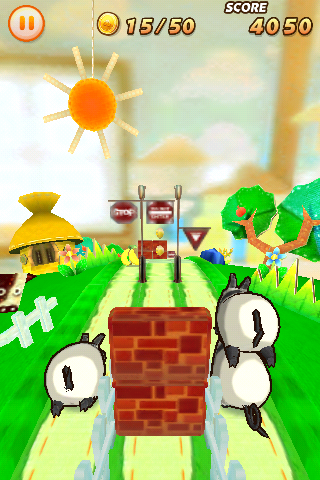 Outside of some performance issues, Flickpig doesn’t do anything wrong. It’s fun, unique and charming. An almost perfect game for small breaks and recommended to all iOS users. Final Grade: A-

Takashi Iizuka and Yuji Naka confirmed for Summer of Sonic