Ask any group of gamers about their most prized moments at the arcades of old, and you are bound to hear the words “House of the Dead” uttered at least one or two times (with the phrase “suffer like G did” lurking just behind it).

Even after the lamentable demise of the arcade culture, Sega has blessedly kept one of the era’s most memorable (and memorably hokey) shooters alive, delivering sequels and ports to consoles, even into the modern era. As long as there’s a light gun or something like it, there will always be a House of the Dead game lumbering and moaning just around the corner.

It makes sense, then, that Sega has been porting a handful of House of the Dead titles to Sony’s latest market share-seeking snafu, the PS Move. Last year, we received a serviceable port of a fantastic game, Overkill: Extended Cut. Now, to much delighted retrophile fanfare, House of the Dead 3 has hit PSN for $6.99. But is that asking price too much for an old on-rails classic? Hit the jump to find out. 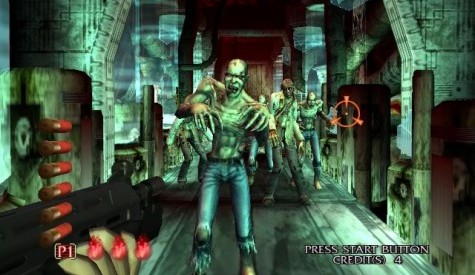 The House of the Dead franchise has never been even remotely interested in delivering complexity or depth, electing instead to tickle that high score gland found in every arcade gamer’s brain. Even Overkill, the franchise’s most recent entry, only goes as far as adding in a basic combo system and dual weapon capability. Take a step back in time to HOTD III, and the traditional pick-up-and-play mentality of the series is magnified tenfold. Point your gun and shoot the zombies. Aim for a headshot if you can—that’s it.

While this might bore your average modern shooter fan, returning to this basic, one-note style of gunplay is like downing a glass of cold, untouched tap water after years of ingesting Kool-Aid, Crystal Light and imported bottled water. The experience may not be the most complex or refined one in the world, but it gets to the core of what we love about light gun games—blasting the hell out of some something while progressing as far as we possibly can. While gameplay lacks length, depth, and distinction, it offers these long-lost arcade pleasures in spades.

Of course, what does make HOTD distinct is its unashamedly wacky presentation. This element does remain intact. Many of the creature designs and character interactions feel as if they have been lifted directly from what is arguably the most beloved game in the series, HOTD 2. New zombies, such as morbidly obese monsters whose stomachs blow out with a single bullet, fit in perfectly with the series’ trademark unintentional hilarity. 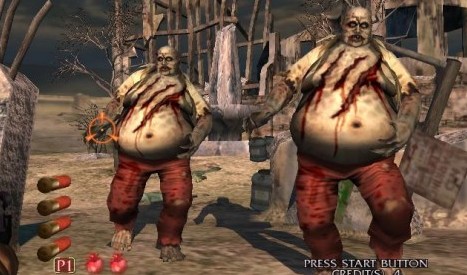 Ironically though, HOTD 3’s slight improvement in presentation is what injures its entertainment value the most. Despite some great creature designs and a couple interesting environments, there’s nothing that ever reaches the benchmark of outlandish insanity that its predecessor set before it. While environments like the plant-based bio lab do stick out, the bulk of them are grey, repetitive, and corridor-based. The bosses are a bit more cliché and uninspired than usual (especially one security guard baddie that shows up multiple times). The voice actors, while terrible in their delivery, are rarely bad enough to be memorable. Aside from an odd fixation that the lead character has with the phrase “believe in yourself,” and one moment where your teammate tells the zombies “not to touch him there,” the dialogue rarely sinks to the ironically entertaining and quotable depths of HOTD 2.

When it comes down to it, your rote enjoyment of this game will hinge on how much you thirst for the simplified arcade experience. All of the standards are here—half hour-long campaign with splitting paths and multiple endings, finger-achingly cheap bosses, a painful dearth of bells and whistles—all that’s missing is a handful of quarters and a nosy onlooker waiting for his turn. 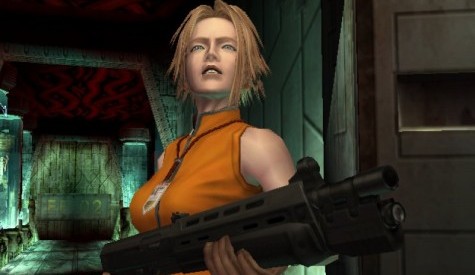 For any arcade purist, House of the Dead 3 will be a speedy, blissful trip down arcade’s memory lane. The shooting is basic and the campaign short, but the fun is as addictive and accessible as it has ever been. Rabid fans of House of the Dead 2 will love just how beautifully this game fits into that Dreamcast classic’s mold, even if the campy humor is somewhat numbed.

If you have any love for House of the Dead and its cheesy charms, then this title is well worth the asking price of $6.99. If you need House of the Dead 2’s knee-slapping dialogue or Overkill’s unique presentation to keep you going, you might be a bit bored with this chapter in the series.

Sega teasing Typing of the Dead re-release for October 29th?