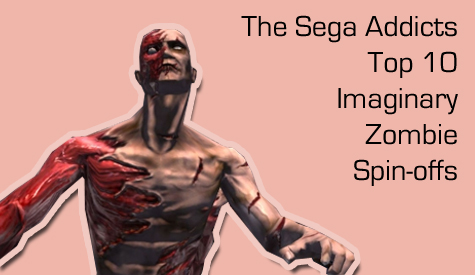 The recent zombie spin-off, Yakuza: Dead Souls, has got us thinking, “What other Sega franchises should get the zombie treatment?”

What we’ve discovered is that nearly every Sega franchise could potentially have a great zombie spin-off. Hit the jump to read our top 10! 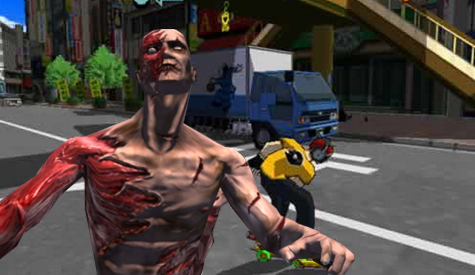 Scott Morrison: The streets of Shibuyo are overrun with zombies, and worst of all they are on your turf! It’s time to show these zombie freaks who really own the streets and figure out what villain is behind these heinous acts of such apocalyptic measures. With a little help from Professor K, you’ll have to defeat rival gangs (although some will be easier, because zombies can barely walk much less skate), and even team up with the police in certain situations. Desperate times call for desperate measures in a world turned on its delicious brain-filled head. It’s a good thing Potts the dog is part of the GG’s, because zombies couldn’t care less about dogs – they know humans have the tastiest brains! If you thought Poison Jam was a messed up group for living in the sewers then you better check yourself before you wreck yourself, because the streets smell just as bad now. Can Beat at the GG’s stop the zombies from taking over the world, or will we be forced to listen to nothing but Rob Zombie forever?! 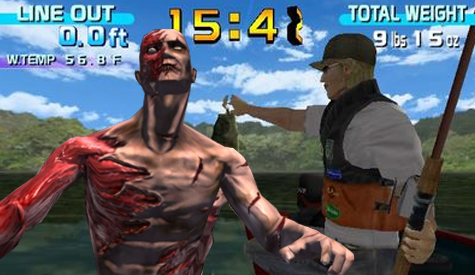 John Doherty: In Sega Bass Fishing of the End the player must fend off zombies while trying to catch a big one. The gameplay would be a mix of Left 4 Dead and Sega Bass Fishing. Players can go online in order to form groups to catch fish, while simultaneously defending each other from the hordes of undead enemies. If a player is bitten by a zombie while fishing they still fish. Instead of casting a line they will instead swim after the fish mindlessly. 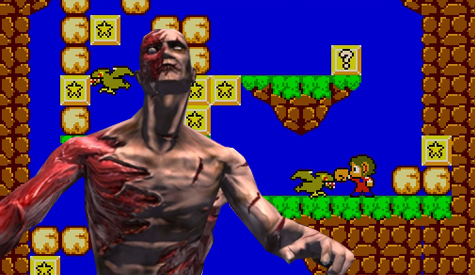 Alex Riggen: Whenever I think of a zombie, I think of how much I want to punch them. Luckily, there’s one Sega character who specializes in punching things and he’s in dire need of a new game. Alex Kidd in Zombie World would continue the tradition set forth by all the Alex Kidd games and be nothing like any of the others. It would be a third-person cover shooter, using only a palette of gray and brown, and Alex Kidd would swear like a mother*#$@er. Well, there would be one thing kept from the earlier games: rock, paper, scissors boss fights. 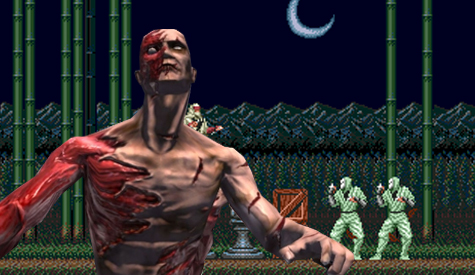 Mike Kyzivat: What’s cooler then ninja’s?  how about zombie ninjas?  If you thought old Joe Musashi was cool before, imagine how cool he could be as an acrobatic sword wielding zombie.  I’m thinking this would be a new game in the series as just adding zombie versions of all the enemies in past games would be kinda boring.  I see the game as a being like  Ninja Gaiden 2, but with a zombie Joe. . With how gory and limb choppy NG2 is, it would be exceeding easy to go that extra step and say the enemies are all zombies.  Juking and jiving until you lop off a leg or two.  But since they’re zombies that’s not gonna stop them, they crawl at ya (again Ninja Gaiden 2 style) until you chop their hooded heads off.  If you decide to start throwing ninja stars or shuriken you’ll have to make sure it’s a head shot or it will only slow down the enemy.

But you would benefit from your zombie state as well.  If you take damage, then just gnaw on a peasant to replenish it.  Or if your arm gets chopped off, take care of the jerk who cut it off then just walk over, pick it up and reattach it. (good as new)  And no more worrying about bottomless pits killing you, you’re already dead.  Plus imagine how much gorier the Mijin ninja magic would be. 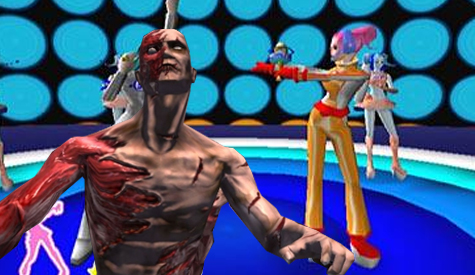 Sven Wohl: So, wait, give me a second here. You need me to explain to you, dear reader, why the concept of a dancing game with zombies is awesome? In case you forgot, how awesome dancing zombies are, just check out Michael Jackson’s Thriller. I mean, that’s an all-time classic right there, am I right? So, just imagine what an awesome game that would be! A survival horror game, where instead of shooting zombies, you dance them into their graves. I’d buy a Kinect for just that! Also, Ulala needs to be the protagonist and you can toss MJ in as an unlockable character! 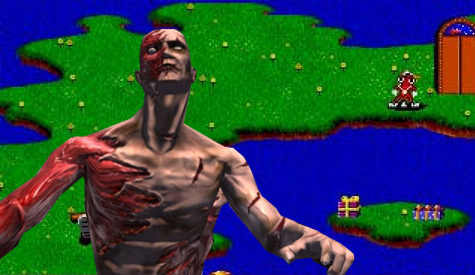 Scott Morrison: ToeJam & Earl would generally be an easier game overall at first, because there would just be slow-paced zombies wandering planet Earth as you try to find the pieces to your beloved spaceship. Soon enough, rampant zombie dogs would attack you with nothing but tomatoes and rocket shoes at your disposal. The hamster in the ball would be a far less threat as a zombie hamster, which could be a lesson to anyone trying to trap the undead. Zombie bogey men would be slightly less annoying since they would forget how to turn invisible, or their entire purpose of scaring you. Earl would of course be the prime choice for zombies, being the plump tasty morsel that he is, while TJ may have a better fighting chance since having three legs would only mean he could run faster. The mob of people would just be a pile of zombies, but would still throw rotten tomatoes at you. Overall, the majority of ToeJam and Earl’s adventure would be easier to navigate as their enemies would be slowed down considerably due to their zombified state. The only downside to a zombie-infested Earth would be that the hula girls would be less attractive. 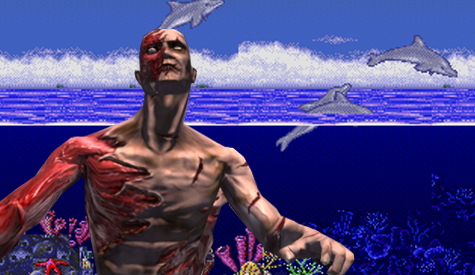 Michael Westgarth: When you think about it, the Ecco the Dolphin is practically a survival horror series already. The original game may have a happy dolphin on the box art, but is one in fact of the most challenging games on the console and sees you waging war against a race of aliens from another world intent on harvesting Earth’s water-based life forms to create the universe’s largest seafood buffet. Replace the aliens with zombies and you’ve basically got yourselfResident Evil but underwater; an instant classic! Zombie sharks, zombie crabs, zombie scuba divers, little zombie shrimps, rotten zombie octopuses, even zombie aliens! You didn’t want it before you read this Top Ten entry, but I know you do now. Sega, make it happen! 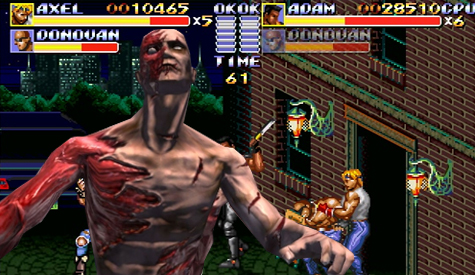 Josh Newey: Maybe I’m alone on this, but I have always found the sidescrolling beat-em-up to be one hell of an overwhelming genre. Enemies approach from all sides, with animations that can cancel out your own attacks. What’s worse, they are capable of beating the snot out of you using your own weapons. Get stuck between two or more beefy dudes with Mohawks and denim vests and it’s easy to find yourself slipping into a white-knuckled, button-mashing, holy-shit-I-honestly-think-I’m-gonna-die panic attack. When you consider the genre in that light, it’s easy to see how these games fit nicely in with survival horror. Zombies would be a perfect fit for Streets of Rage, and could turn up the intensity and overwhelming tension to eleven. Fill a screen with a hundred of these foes, and arm Axel with any of the franchise’s many classic barroom weapons, and you’re just one dimension away from playing that zombie-comedy Dreamcast classic, Zombie Revenge.  Add in exploding zombie heads, the ability to use the limbs of downed foes as weapons, and the ability for downed teammates to transform into zombies themselves, and you’ve got a 2D masterpiece worthy of calling itself a Streets game. 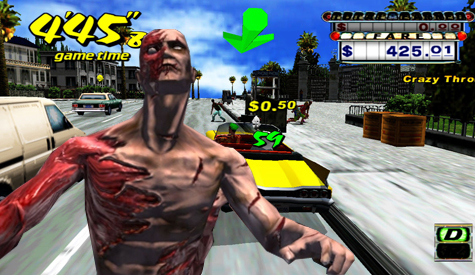 Tom Kyzivat: Ah, Crazy Taxi!  You could go in a few different directions with this one.  You could just throw zombies into the pre-existing game and make them a new obstacle to overcome, but I think a post-zombie Apocalypse version of the game would be more fun.  You, armed to the teeth and driving an armor-enforced taxi (a la Mad Max), would deliver patrons safely from one location to the next, zombie-free.  Everyday activities like running out for milk or heading to KFC would be a lot more fun if danger and peril were involved!  Smash zombies, run them over, fill them full of lead from from your window opening–you see where I’m going with this.  And of course you’d have to pick other patrons up before the zombies get them!  Don’t wanna lose your customers.  It’s a world where man has learned to live with zombies, but it just takes some adjustment.  Of course, the other spin is that you yourself are a zombie and you’re carting other zombies around to the finest brain restaurants or markets, or simply chasing down humans for them to eat.  You know, the land speed of a zombie has always been their foil.  And your meter would count the ounces of brains the customer owes you in fair by the end of the drive.  Keep the change, buddy! 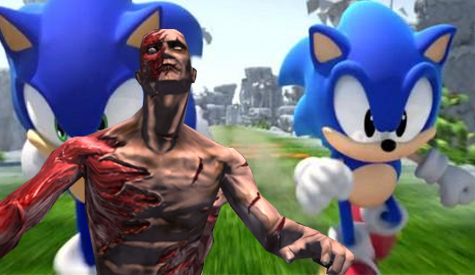 Flake: So Sonic runs. Typically, he runs from left to right. Since Adventure, he runs from the front of the screen into the distance. He’s always running TO something.

So how about a game where Sonic is running FROM something? A Robotnik plan gone horribly awry: Planet Mobius is swept by a Zombie disease and the entire extended Sonic family has turned undead. We may never see the corpse of Big the Cat but I could settle for his shambling husk of a body. So now Sonic has to find a cure for the virus while staying ahead of Zombies who are almost as fast as he is or, in the case of Shadow and Silver, maybe even faster.

Wait a second, why has this game not been made yet? Seriously. Sonic has had Genies and Knights and Princesses suffering from slight bestial desires. Surely a Zombie the Hedgehog game is a thing that could happen!

Yakuza will be part of Japan’s GREE social gaming platform