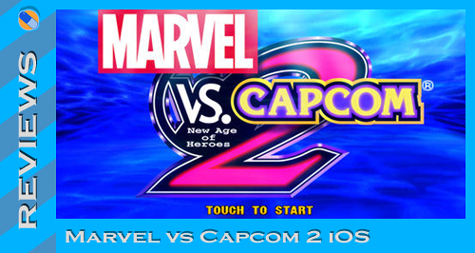 I fell in love with the Vs. series thanks to the Sega Dreamcast. Released in arcades and on the Dreamcast, the first Marvel Vs. Capcom game included a small cast, but infinite replay value. Marvel Vs. Capcom 2 gave the series an insane multi-combo kick in the pants by pumping the roster up from 15 to 56 fighters. Marvel Vs. Capcom 2 rewarded button mashers and even seasoned fighters with 3-on-3 matches composed of their favorite comic and video game heroes. Nearly 12 years later after seeing ports on PS2, Xbox, PlayStation Network, and Xbox Live Arcade, Capcom decided to release this hyper-active fighter on the iOS. However, with new controls on a touch screen, do you or don’t you want Marvel vs. Capcom 2 on the iOS to “take you for a ride?” Hit the jump to find out!

Playing this on my iPhone, I immediately changed the screen size to “regular” in order to see the fighters because otherwise my thumbs were covering them while pressing the touch-buttons. There are 2 main control types for the game, each with their own benefits. Type B is actually the default setting, which has less buttons on the screen, but simpler execution for combos and team attacks.

On the right side of the screen is a silhouette of a person with an arrow over their shoulder, which is your partner button. When tapped, this will call in one of your partners to perform a quick assist and then exit the screen. By pressing that same button and then sliding your finger towards your opponent, you will swap your fighter with one of your partners. The other way to call in a partner is to hit the punch and kick button simultaneously, which I found can sometimes be difficult. To perform a full team attack, you simply slide your finger from top to bottom over the Partner button and the Special button below it. This is easy enough, when it responds correctly.

In a game like Marvel Vs. Capcom, speed and timing is everything. I felt that I was not performing combos quick enough, so I switched the control scheme to the other option, which allowed for 4 face buttons and a button for each partner. “More freedom!” I thought. I thought wrong. Having more face buttons meant more space covered by my thumb, which actually allowed for less actual freedom and more thumb wars. Giving in, I returned to the default settings.

As with any 2D fighting game, the directional pad can quickly determine a victory, but not when the d-pad is replaced with a lagging touch circle. I tried multiple half-circle attacks and “Z” attacks (which is when you move your thumb in a Z-shape across the d-pad) but felt as if I had a 50% chance of actually performing the desired combos. Performing high-jumps is far more difficult than it should be, and greatly hurt my play style as I typically leap all over the stage as Spider-Man. I feel that Capcom wanted to make up for the lagging directional circle with the slide controls, but for someone who relies more on individual combos than team attacks I could barely make it through the Arcade Mode.

Controls aside, Marvel Vs. Capcom 2 runs very well on the iOS. I experienced very little slow down and when I did it was surprisingly outside of team combos. The game ran smoothly and even looked as if the visuals had been smoothed a bit, which lead me to believe this was closer to the XBLA and PSN version than any others. This was especially apparent during the load screen when the portal-type background did not have many blocky edges.

While I was making my way through the Arcade Mode I found myself dying to cheap moves and spamming from the computer, so I knocked the difficulty level down to “easy.” I felt like I had a handle on the touch controls but was still having difficulty timing my team attacks and individual combos. Refusing to believe my fighting skills had suffered in my time away from MvC2, I booted up the Dreamcast version to see if I had simply lost the touch.

Using the same team of fighters I formed on the iOS, I quickly made my way through the Arcade Mode on Dreamcast with only having to continue once or twice aside from the final battle. When playing the iOS version, I spent atleast a solid 30 minutes on the 5th round alone. I rarely say this about a game, but I honestly blame the controls for my lack of success.

One redeeming trait on the touch controls for Marvel Vs. Capcom 2 is that you can actually map the location of the buttons. Doing this however, might defeat the purpose of the slide controls. I attempted to move things around a bit, simply to see more of the screen, which helped in the long run, but the game was still unfairly difficult.

Overall, Marvel Vs. Capcom 2 is an amazing game with its colorful and crazy attitude, but the iOS is not the place to enjoy it. As a fan of the series, I was hoping for a more addictive portable iteration, but only found extreme frustration with the controls. For anyone looking to get into the series, I highly recommend you look to the more recent XBLA or PSN releases as the game is meant to be played with a controller and responsive buttons. I also forgot to mention that the 2-player versus mode is only playable via bluetooth, which means you would have to convince someone else to buy this version of the game. I wouldn’t feel comfortable doing that to a friend, especially when you can play with anyone in the world online with the downloadable network versions. 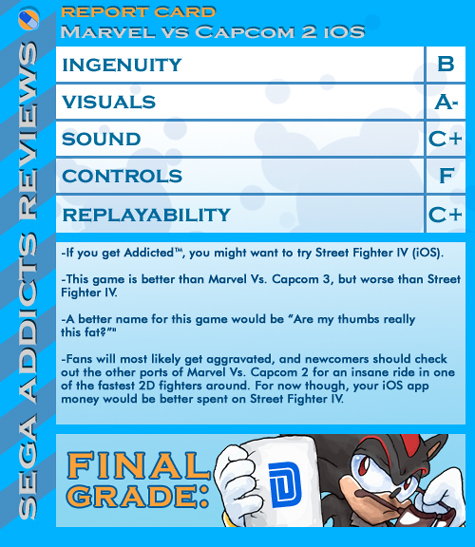