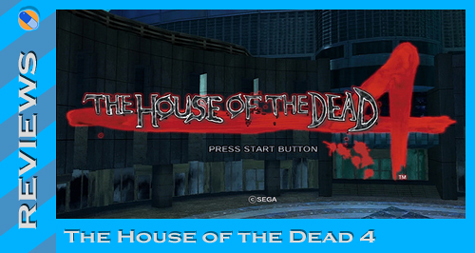 If you’ve been paying attention (and I’m sure you have), you have most certainly noticed the recent resurgence of Sega’s iconic light gun series. In less than a year, we’ve seen House of the Dead Overkill get rereleased on the PS3, House of the Dead 3 and 4 hit the PSN, and the brand new Typing of the Dead spinoff Flick of the Dead hit the iOS in Japan. As one of the unlucky suckers misguided enough to put his hard-earned money down on Sony’s PS Move, I’ve got to thank Sega for giving me a little bit of justification for buying this stupid-looking waggle-wand.

With House of the Dead 4, Sega’s rerelease onslaught comes to an end, providing fans with the chance to play a formerly arcade-only title on a console for the very first time. The question is, how does it hold up without the uzi-toting arcade cabinet? Can it stand alongside the beloved cheese of classics like House of the Dead 2 as another delicious helping of camp, or has that undead flavor finally gone bland? 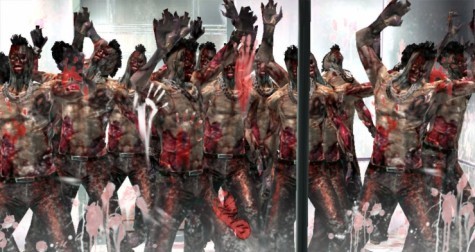 I have to admit—I entered House of the Dead 4’s front door with a little bit of apprehension. I had never played this one before, and of any of the games in the series, I’ve heard the most mixed responses to the fourth iteration. Several of my friends were turned off by what they called a darker tone, citing the developer’s attempts at some grittier level and creature design. Coming off of House of the Dead 3, I took these criticisms very seriously, as that game ironically suffered from a slightly higher level of quality in terms of voice acting, writing, and visuals. These games are at their best when their production values and characters are at their worst, or at least at their funniest. If this entry tried to ramp things up even further than 3, or even took itself slightly seriously, it could potentially make for one very bland experience.

Now that I’ve played the game and its special extra mode a full three times over, I have to admit—I have no idea what those people were complaining about. 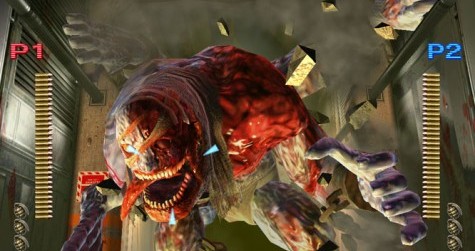 Admittedly, House of the Dead 4 does boast a graphics engine that is leaps and bounds better any title in the series before it, which initially does stunt the camp a bit. Stages are gritty and attractive, and enemy designs are generally quite detailed. Extra visual flares like bits of flesh that get eaten away as you blast a zombie’s face or a burst of inexplicable blue flame that emits from any creature you kill set this game apart from almost anything else in the series, even seven years after its initial release in arcades. Obviously, these graphics don’t come close to the visual feasts we have today, but it’s still rather impressive how well they have held up, especially when you consider that it was the first arcade game to offer an HD widescreen display. Oddly enough, despite this visual upgrade, the series staple of laughably nasty character models remains. I will never understand why Sega has such a hard time nailing down what G is supposed to look like. 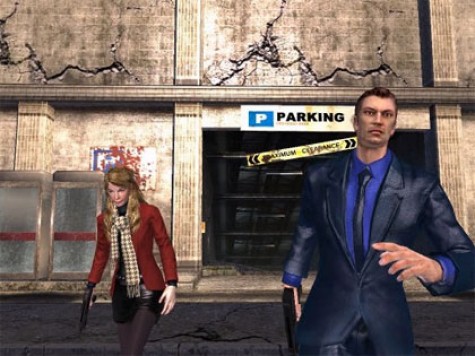 Beyond the game’s fairly high-quality visuals, the franchise’s trademark unintentional sense of humor remains steadfast. Most of the chuckles or full-on guffaws I spurted out were borne from the odd techno-punk style. Basic zombie designs are almost universally shirtless, many of which sporting black mohawks and sprawling tattoos. In the background, silly albeit catchy techno music plays, accenting a game filled with strange vampire-like flying zombies and even robot zombies near the end. You heard me. ROBOT. ZOMBIES. Tell me this game is bland now. Just try.

Further adding to the game’s ridiculousness is a handful of genuinely cool bosses. As with any HOTD game, they all play pretty much identically, but their visual designs are often quite hilarious. I simply can’t call this game boring as I blast away at a massive, obese creature with man-boobs who rolls around, absorbing your bullets in his amorphous fat.

The rest of the gameplay fits in well with almost any other HOTD title, save for one game-changing feature—automatic weapons. One of my favorite experiences in any lightgun game is the feeling of picking off careful, focused shots with the satisfying and singular “BAM” of a handgun. Semi-automatic weapons offer a nice instance of empowerment, but utilizing them too much feels too easy and never provides enough satisfying tactile feedback. In this game, your primary weapon is a fully automatic uzi, which sprays your enemies with gunfire, no matter how briefly you hold the trigger.

At first, the change was glaringly noticeable, and it made the game far too easy. Zombies go down much faster, and your hail of bullets manages to keep many of them at bay until they are killed off. But as I progressed, I started to realize just how many more enemies were filling the screen as I took out wave after wave. Previous entries in the series rarely had more than four or five encroaching baddies onscreen at once, as any more would just be overwhelming, but 4 pits you into several situations that are brimming with quickly approaching creatures. I still never had much of an issue with promptly wiping the screen of the undead, but the endless waves of zombies at least built a illusion of imminent death around several corners. 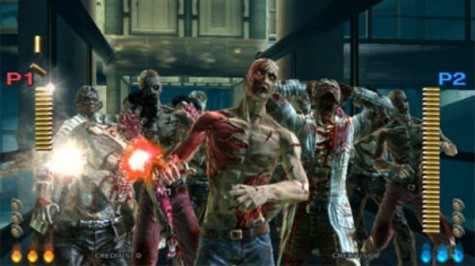 Further separating HOTD 4 from the rest of the series is an appropriately heavy reliance on motion control. When this was first released in arcades, I imagine it felt pretty bizarre to have to shake your gun to reload, or to push away an attacking zombie. After years of needless “WAGGLE YOUR REMOTE TO RUN” prompts, House of the Dead 4 ironically now feels far more appropriate for at-home motion controllers than it originally did in the flashy, flamboyant arcade cabinet. If you’ve tolerated the constant flailing of the Wii’s best first person shooters (like…um…Conduit 2?), you’re bound to feel right at home here. In fact, several moments in this game reminded me distinctly of one of my favorite on-rails shooters of all time, the Wii’s Resident Evil: The Umbrella Chronicles.

With a thoroughly entertaining (though characteristically short) campaign, an extra handful of bonus stages featuring the beloved G as a surprise character, and several unique endings and splitting paths, this game offers a lot more replay value than HOTD 3. Even at the slightly pricier cost of $9.99, House of the Dead 4 is worth your time and money, if only as a brief walk down arcade’s memory lane. It’s rare that an arcade-only game makes its console debut on a download service, and I’m grateful that Sega took that leap. It may not be particularly difficult or original, but it’s unique, entertaining, and fun enough that it deserves the same standing as other series classics like House of the Dead 2. 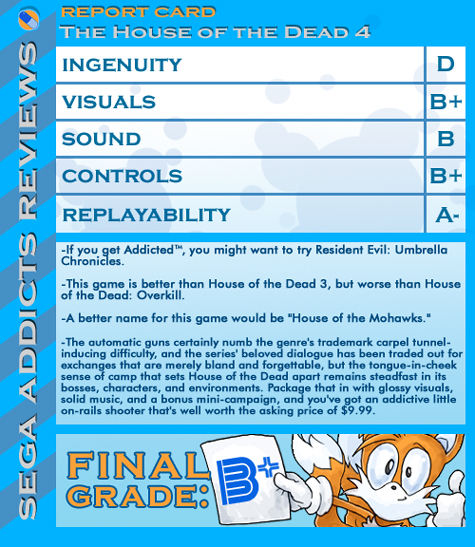 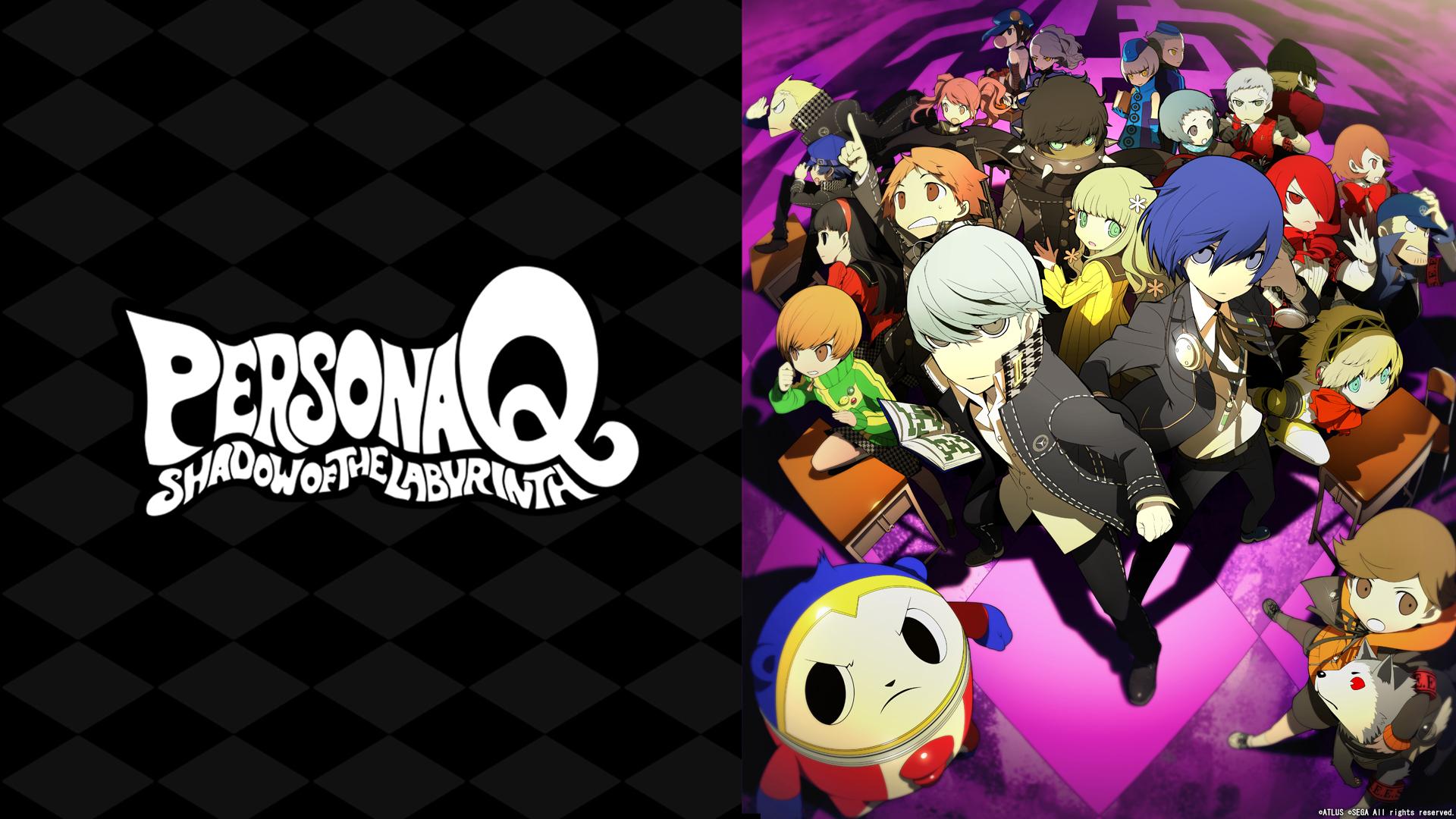