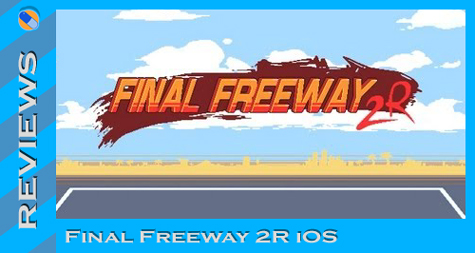 Final Freeway 2 looks a lot like Outrun at first glance and frankly, it’s the reason why you’re reading this review on a Sega-centric site. It not only looks lite Outrun, it also plays and feels like it. Since there is no Outrun port on iOS yet, which always seemed like a somewhat curious omission to me, this seems to be the next best thing! Hit the jump in order to find out what I thought about it!

I personally never had a lot of time with Outrun, but I do get the basic concept and appeal. In a way, the game has always been quite unique up to this day. The goal of it is simple: You need to drive with your expensive looking car to the end of each area in time, like in Sega Rally, and choose one of two paths to continue on. You just have to make sure not to run out of time or smash into the traffic. Final Freeway 2 does the very same thing, but also throws in an adversary that you can, pardon the pun, outrun. This is mostly done for bonus points, as the game does not end when you don’t get to the end of each area first, but it adds a nice amount of variation to the flow of the game and also works as a score modifier. It doesn’t make it harder, which is welcome, since the time limit is really strict on normal difficulty already. However, the easy difficulty setting gives you more time and thus allows you to get further.

The biggest hurdle any iOS title has to overcome is the controls. Final Freeway gives you several variations of two basic options: You can use the tilt controls, if you like sucking at games in general, or you can choose a steering wheel combined with a gas pedal and brake. The latter option works great, as it provides you tight controls on the one hand and enough screen surface to actually see things on the other. Even better is the fact that there are variation here that cater to left-handed people. This gets a huge thumbs up by me, as they are often left out.

The graphics and music orient themselves on the classic Outrun but have their own character, as every new area has a distinct look to it. The framerate never dips, the feeling of speed is always there and the good selection of colors makes the game stand out overall. The music might not blow you away, but it does a great job at getting you in the mood and gives you a small selection of tracks. The female voice sounds really robotic though, which is one of the very few negative points I can come up with. 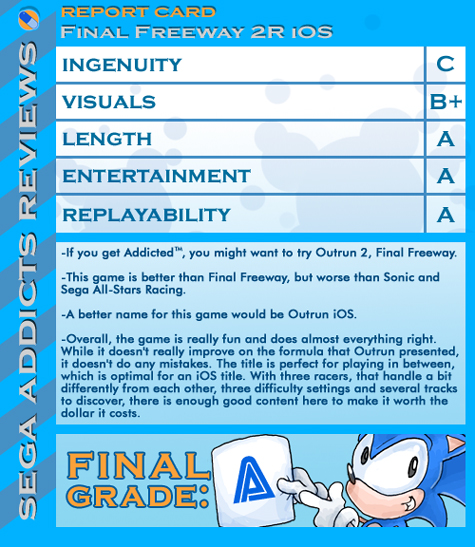