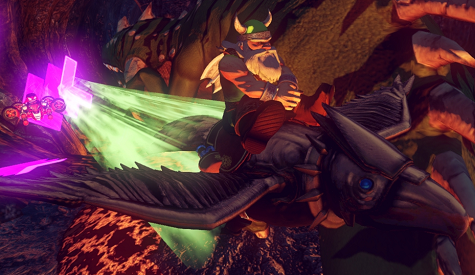 A pre-order listing on UK-based online retailer Zavvi for Sonic & SEGA All-Stars Racing Transformed reveals a vast amount of juicy details regarding the content of the game. Important info includes:

It is clear that Sumo Digital have expanded the features of Sonic & SEGA All-Stars Racing Transformed considerably compared to its predecessor, making what was already a solid kart racer even better. I can’t wait to get my hands of this game, but what do you lot think? Leave us a comment below, and hit the jump to read the full product description.

Sonic & All-Stars Racing Transformed is the brilliant racing video game developed by Sumo Digital, and is now brought to you on the Wii U, Nintendo’s innovative gaming platform. This game is the eagerly anticipated sequel to Sonic & Sega All-Stars Racing, which was released in 2010. Ideal for retro SEGA enthusiasts or fun with family and friends, this graphically overhauled game offers exhilarating co-operative and competitive racing gameplay that can appeal to all ages.

Racing Transformed has, literally, transformed the way Sonic and the Sega All-Stars characters race, as now their karts transform into boats and planes when the terrain gives way to water or air. The tracks themselves are based upon retro Sega games, and they also change; the Panzer Dragoon inspired track Dragon Canyon has a dragon that roams the map and destroys a bridge early on in the race. This therefore forces the players to continue racing around the track either via their planes or boats, and means that every track has endless possibilities and versatility when it comes to gameplay. Each track also has many possible routes to take, including a number of shortcuts to be found throughout, offering a great deal of replayability for each course.

Alongside Sonic, a great deal of new and familiar characters emerge to join in this kart racing frenzy, adding up to 27 characters in total. These range from and include older fan favourites such as Gillius from Golden Axe, Joe Musashi from Shinobi, Vyse from Skies of Arcadia, along with the likes of Tails, Knuckles, and more. Each character’s vehicle handles differently, meaning that who you play best as is entirely up to your own personal playing style. You can perform tricks in every vehicle, which means that the All-Star meter, will fill up the more stylishly and daringly you drive; this leads to gaining experience points, and also your character’s All-Star Move should you fill up the bar, which can also be filled by collecting stars that are littered around the track.

Each course you race through has power-ups that can be found throughout, which can be used to throw off your opponents. These range from snowballs, bees, and also offers a defensive power-up, the baseball mitt, which acts as a shield and absorbs the power-up attacks your opponents throw at you and allows you to use them yourself instead. Super power-ups can be found in various hidden and hard to reach areas within the track, definitely giving you the advantage over the rest of the competition, and meaning that each race can be unique no matter how many times you play.

There is an extensive story mode that features sixteen brand spanking new Sega game-inspired tracks, which allows you to unlock characters as you progress throughout. You also earn points for your chosen character for completing races, which add up into a five rank levelling system, unlocking achievements, perk style vehicle modifications, and more, the more races you complete. These modifications can be equipped to alter the handling characteristics of your favourite character’s vehicle, amongst other things. Racing Transformed also offers overhauled multiplayer modes; whilst there is still the incredibly fun split-screen multiplayer, now there is an enhanced online multiplayer mode. Whilst playing and competing online, online races can support up to eight characters at once per race, ranging from the Grand Prix mode and the competitive Battle Arenas, and allows for new track records to be set.

The wide range of gameplay available within this game means that there is something for every Sega and racing game fan out there to enjoy. Whether playing solo, online, co-operatively or competitively, get stuck in and enjoy drifting round every corner, soaring through Sega’s signature blue skies, or speeding through the waves in a wide range of tracks that offer almost endless replayability.

Have a video of Rhythm Thief & the Emperor’s Treasure