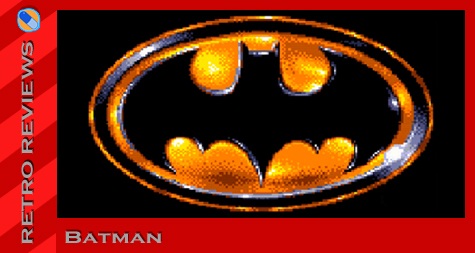 Everyone loves a bit of Batman. Whether you grew up with Adam West’s tomfoolery, found unexpected brilliance in Batman: The Animated Series, or are a fan of Batman’s rich comic book history, Batman is a cultural icon we have all enjoyed in some form. With the conclusion to Christopher Nolan’s Batman trilogy currently showing in cinemas worldwide, it seemed fitting for me to crack out the cape, dust off the utility belt, pretend the sun’s not shining and play the very first Batman game available on a Sega console.

Now Available On: Nothing else I’m afraid.

Reviewer Perspective: Repeat Offender, periodically coming back to the game for one more play through.

Batman is no stranger to the world of video games and had appeared several times in games on various home computers, but Batman would mark the caped crusader’s first appearance on a home console, bar the ill-fated GX4000. Developed and published by Japanese developers Sunsoft, the game is an adaptation of Tim Burton’s 1989 box office hit Batman, or as I like to call it, ‘Batman 1’, and was developed alongside a NES version, although the two games differ significantly.

Batman is a very standard side-scrolling beat ’em up of sorts with minimal platforming action to be found. Most levels involve simply strutting from left to right, punching and kicking the heads and testicles of anyone that gets in the way. Hitting ‘A’ will have Batman chuck out a batarang in the direction he is facing which deals more damage as well as having the obvious projectile advantage and at times ol’ Brucey will have to go upwards, which is aided by a grappling hook that is unfortunately only able to fire straight up. 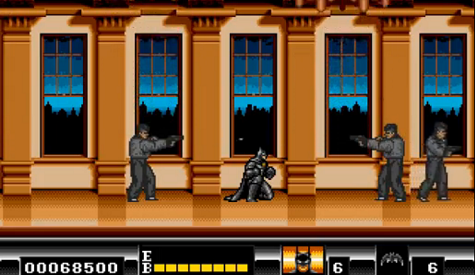 The game hardly breaks any boundaries graphically either. Sprites and detailed enough, but the enemy variety, which mostly comprises of differently dressed thugs, is too low for anything to really stand out apart from Batman’s sprite which has some fairly fluid animation. The levels themselves are also adequately detailed and somewhat resemble the locations in the film that game is based on, but even though gets a fair amount of play I still find myself forgetting what the next level will be.

There is, however, something special about Batman that allows me to look past its mediocre gameplay. In most cases, DC’s Batman flies through the night sky, between Gotham city’s skyscrapers, watching his prey from the shadows and enducing fear in the criminals he justly captures and turns over to the authorities. Sunsoft’s Batman struts through the streets of Gotham city, like the total badass he really is, kicking the shit out of anything that moves. Goons, fire-breathing mimes, samurai wielding white-guys–it doesn’t matter as they’ll all be queuing up at the gates of hell once Batman’s fists smash their skulls in. In fact, you get to control Sunsoft’s Batman as he punches Jack Nicholson, I mean the Joker, I mean Jack Napier over the Axis Chemical Factory rail into the scolding vat of chemicals below. 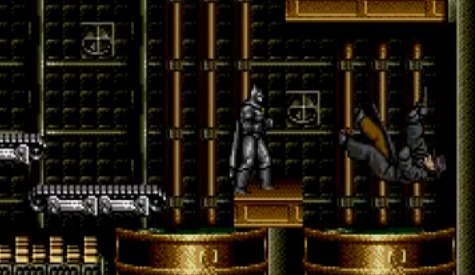 Aiding the bad-assery of this brutal, murderous Batman is one of my favourite Mega drive soundtracks with some of the most rocking tunes you’ll hear on the consoles, all enriched with those punchy electric guitar and satisfying slap-bass sounds the Mega Drive does so well.

As if Batman’s on-foot rampage wasn’t enough, two of the game’s six levels are spent in the driving seat of the Batmobile and the Batwing, horizontally scrolling shoot ’em up style. I’m particularly fond these two sections as they help break up the mediocre platforming sections but also because I get to absolutely destroy scores of the Joker’s manned vehicles from little joker cars, massive tanks to missile launching helicopters. The enemies move and attack in memorisable patterns, and the controls are tight enough for me to want to whip out an arcade stick for some wholesome shoot ’em up action. But most importantly, you get to kill, kill, kill; forget the ‘Dark Knight’, Sunsoft’s Batman truly is the Angel of Death. 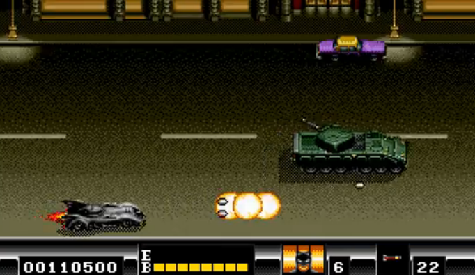 Batman brings nothing new to the table and is standard in terms of its gameplay, graphics and challenge and can be easily completed in less than an hour. Saying this, the game does nothing badly either and in fact acts as a decent little time filler for those who want a quick and easy platformer to play. Playing as Batman, as well as being able to pilot the Batwing and Batmobile sweeten the deal. Throw in some really awesome music and what you have is a neat little bundle of 16-bit action that I would advise anyone to pick up if the price is right. 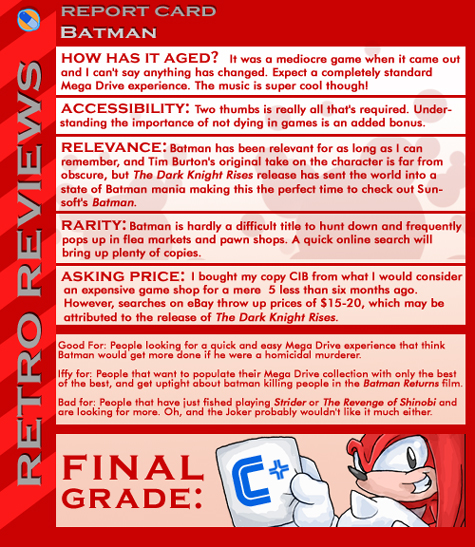