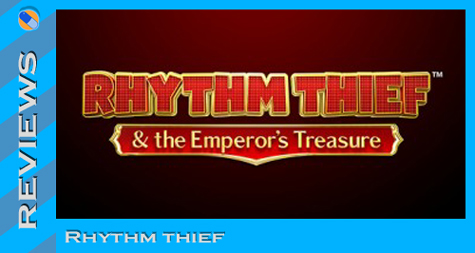 When you make a rhythm game, you’ve got to have style. You’ve got to have class. But most importantly, you have to be fun enough for anyone to pick up and play whether they have tempo or not. In the case of Rhythm Thief & The Emperor’s Treasure, you also need a fedora. Do these things all come together to form an amazing rhythm game for the 3DS, or should you go back to Guitar Hero On Tour? Hit that jump and side-step your way into the land of Paris, where no treasure is safe from Phantom R!

Rhythm games have typically been nothing more than quick sessions of taps and memorization with little attempts at any coherent connection between each match. Guitar Hero and Rock Band succeeded in creating a somewhat logical “plot” between each set list of rock songs, while games like Parappa the Rapper in the past have tangled a love story in between songs. Rhythm Thief has changed this drastically in every sense by not only creating a coherent plot, but by also creating a large variety of rhythm games to make each one seem plausible for the task at hand whether it be dancing, frying food, feeding a dog, or hiding behind statues. Not only that, but Rhythm Thief creates a world within itself that provides a need for exploration in the city of Paris. As a fan of rhythm games in general, I can say that Rhythm Thief is the most in-depth example the genre that I have ever experienced, and it doesn’t even have a character creator!

Rhythm Thief’s main “hero,” Raphael is a typical Paris local by day and a cat burglar by night with the aid of his dog, Fondue. Under the cat burglar identity of Phantom R, Raphael steals priceless pieces of art only to return them shortly thereafter. His reason for a life of crime? In a round-about way, Raphael is stealing items in a search for his father, who disappeared three years prior to the game’s setting. While making a heist, Phantom R is confronted by a man claiming to be the reawakened Napoleon Bonaparte. Between the police and Napoleon, Phantom R has his hands full of things besides just stolen artwork, and there’s only one way to solve these mysteries: DANCE!

The player is introduced to the game with a simple beginning level consisting of directional slides across the 3DS touch screen. This first level seems easy enough, but when you get used to sliding the stylus you are quickly treated to a different game incorporating statues that Phantom R must hide behind in order to avoid museum guards. These statues are represented with different colors on the touch screen, which is split into 4 sections to match the colored statues on the top screen. Tapping the desired color causes Phantom R to pose behind each statue. Once obtaining his desired treasure, our hero must escape the scene and do so across rooftops with the help of tapping “A” to jump or “B” to slide and avoid the clutches of (direct quote from the game) “the famed Paris roller skate brigade!” Thrilling stuff!

Upon completing the introductory levels, you are introduced then to the Paris map, which looks like a boardgame at first glance with a dotted path leading you to your next destination. However, on these path there are many stops where you can speak with locals, and literally tap anywhere on the screen to find medallions, which are used to purchcase in-game assists/upgrades, cutscene videos, or different game modes. Searching each scene on the map will also allow players to find a plethora of things to further unlock additional chapters in the game. Things found on each screen include five musical pitches that will reveal a portion of the Phantom Notes, certain recordable sounds and noises, and of course entry into mini-games.

The mini-games in Rhythm Thief are where the variety shines the most. As a helpful citizen, Raphael may volunteer to work at a restaurant where you will catch food in a frying pan and then flip it onto a serving plate. Raphael may also enter dog-training challenges where you will actually control Fondue and tilt the 3DS from left to right in order to catch pieces of meat. When playing as Raphael’s new-found female friend, Marie, you will strum her violin to the best of your ability (which I somehow found to be the most difficult games when the speed increased). During many of his crime scene escapes, Raphael must also fend off a vigilante cop through soccer ball matches, because justice is apparently best served with a bicycle kick. Fans of Sega’s past will also be happy to know that a few mini-games provide nods to previous titles such as Samba De Amigo and Space Channel 5.

Rhythm Thief can also quickly become a “collect-a-thon,” or what some may relate best to the Legend of Zelda series. Early in the game, a shop owner informs you that he needs help creating a “Master Instrument,” which, when completed, will mimic only those instruments found in Whoville. This instrument is formed through collecting sounds ranging from sneezes to car horns, which are usually required to progress in the main story anyway, making them an indirect necessity after the game’s main story is complete.  The introduction of these random sounds soon shows that randomly clicking on the entire screen may prove somewhat productive and in turn feel required to some completionists. The previously mentioned phantom notes can also supply an addicting search, and the same goes for the scattered medallions. Collecting these items will eventually unlock hidden chapters, making the search feel worthwhile and adding a good bit of replay value once the main story is completed.

The story in Rhythm Thief is interesting enough to keep one going, and well done with anime-style cutscenes even if the dialogue does cause a few face-palms. I found myself wanting to watch more cutscenes rather than advance the story by running through the streets of Paris. Map wandering is also broken up during treasure heists by completing simple puzzles with the touch screen to unlock doors, disable security cameras, or open safes.

Multiplayer in Rhythm Thief seems like an afterthought as the “battle” consists of nothing more than competing for the higher score while being able to see your opponent’s grade as the level progresses. There is also a StreetPass addition, but I unfortunately have not come across any other players to see the full potential of this mode. I guess I just don’t have any friends in Paris.

“If you don’t play this game, my mechanical Poison Jam gang will have their way with her.” – Napoleon

With over 50 different rhythm games, well-animated cutscenes, a large amount of depth and exploration, Rhythm Thief & The Emperor’s Treasure is a game that may unfortunately pass under many gamers’ radar. I am hoping this game garners a big enough following to warrant a sequel simply for the sake of adding ridiculous multiplayer modes. I feel that a game based around dancing and other styles of gameplay found in games such as Cooking Mama, and even Rhythm Heaven could definitely shine better on a console rather than a handheld system. However, Rhythm Thief does a fantastic job showing off the 3DS’s abilities and versatility while supplying a catchy soundtrack. Any rhythm game fan should definitely check this game out and join me on the streets of Paris for brunch and a dance-off. 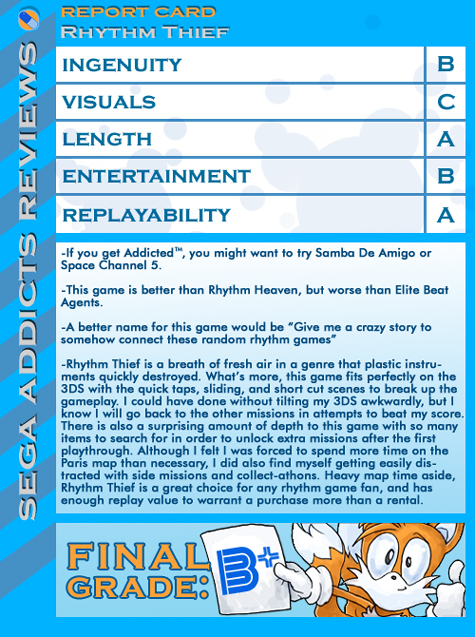