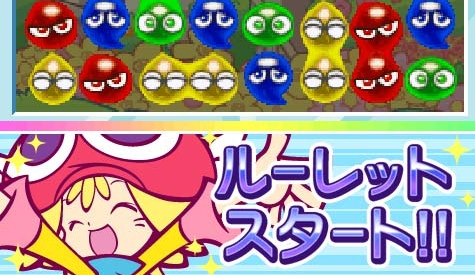 What was originally speculated to be a Playstation Vita Puyo Puyo game, Puyo Puyo Narabe has in fact been announced by Sega as a title for Android devices ver 2.1 and above. This new game deviates somewhat from previous entries in the way that the match-falling-coloured-blobs gameplay has been altered to having an already filled screen which is cleared by using the touch screen to drag and match the Puyo blobs. Bejeweled does comes to mind.

Perhaps the most interesting aspect of the game is the method by which it is purchased, or to be specific, the way the game isn’t purchased, where players must pay a monthly fee of ¥315 (€3.16/ $4.05). Personally I don’t find the idea of paying €3 a month for a game I’ll play now-and-then very attractive, but what do you readers think? Let us know in the comments below!