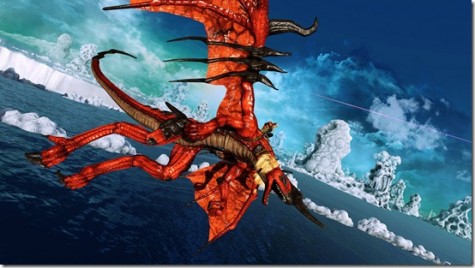 The upcoming Kinect game Crimson Dragon may be carrying Panzer Dragoon’s on-rails torch, but as creator Yukio Futatsugi recently revealed, the sequel could still bring us a spiritual successor to yet another long-forgotten, but much adored, Sega title–Panzer Dragoon Saga.

In an interview with GamesTM, Futatsugi suggested that if Crimson Dragon were to continue past the first game, he’d like to drop the simplified on-rails Kinect controls and multiplayer focus in favor of a fleshed-out story in an open world, much like the beloved Saturn RPG:

…Of course we can’t make an open-world RPG on an Xbox Live game development budget, but I want to make a game that feels like an open world, but has a very focused story. So I want to combine them using different thinking to make a Crimson Dragon RPG…

Of course, this is all just idealist talk, but that doesn’t mean it isn’t ridiculously exciting. Even as someone who has only just gotten the opportunity to even touch a copy of Saga, I can say that this is a boon to all the fans that have longed to play one of gaming’s most elusive and prohibitively expensive must-play titles.

I just wish I had a Kinect so I could actually offer my support for the sequel.