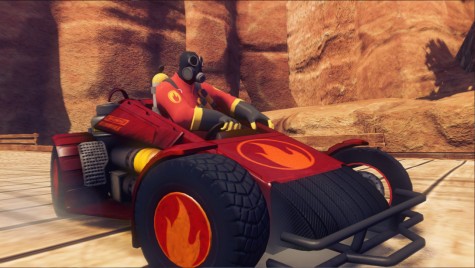 Sega announced today that the PC version of Sonic & All-Stars Racing Transformed will indeed be boasting a handful of brand new characters. Among them are representatives from two of the company’s top four franchises, Total War (Shogun) and Football Manager (Manager Man…Wait, is that really his name?).

But perhaps more intriguing and far more surprising is the inclusion of characters from one of Valve’s many immensely popular FPSes. That’s right–in addition to other non-Sega entities like Wreck-It Ralph and Danica Patrick, players will be able to race with none other than the Pyro, the Heavy, and the Spy from Team Fortress 2. Freakin’. Whoa.

While I’ve expressed major personal issues with non-Sega characters eking their way into Transformed in the past, this package makes total sense to me. Both of Sega’s most substantial PC titles are getting represented, and like the inclusion of Gordon Freeman in Renegade Ops, this extra nod to Steam lovers is an awesome way to incentivize the purchase of a several month-old game.

Hit the jump to see some screenshots of these new characters in action!

Pre-Order Sonic & All-Star Racing: Transformed on Steam and get 10% off the price

Creative Assembly on why Total War: Arena is free to play

Space Siege is 75% off on Steam right now

This Generations mod brings Sonic’s buddies back into the fold