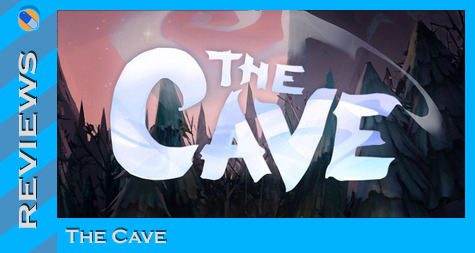 It might be graceless to start off a review with claims of undying love but I’d like to get it out there that I do love Double Fine. They have a certain style and humor that really stands out in today’s brown and dirty-yellow visual ideals. Their games are always a delight and I consistently look forward to each new original release. And as you can probably tell we’re big Sega fans here meaning that when this partnership was revealed I couldn’t be happier. It was a match made in videogame heaven.

So why, dear reader, would I kick off this seemingly ultimate friendship’s first game The Cave‘s review with something shallow unapologetically loving? Well my intent was to lay my cards on the table and say that Double Fine is a great company, well worth their spot in the games industry, because disappointingly The Cave is not. Hit the jump to see why. 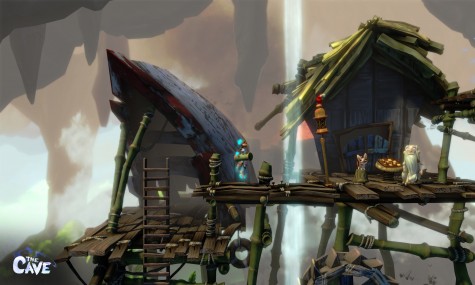 The Cave starts off with very promising intentions. It’s a puzzle platformer with a unique flavor to it and a really interesting, noteworthy premise. Seven diverse entities have journeyed to the titular cave in search of what they have most desired. However unknown forces conspire against them, and to succeed they must traverse through an anthropomorphic Cave who has better plans for them, mainly to show them their true dark selves. It’s a neat premise with deliciously dark undertones that really excited me. It’s nothing too bleak, more of a Grimm’s fairy tale than anything too outrageous, but the tone is nicely shady, at least by Double Fine standards, and proves to be one of the better aspects of the game’s story.

These darker plot hints are nice but there’s always an underlying humor to the game, mainly in the narrator’s (the Cave’s) dialogue and forth wall breaking gags. I’d actually go as far to say that The Cave‘s narration is the best part of it, and one of the only things stopping me from taking casual breaks from the boring atmosphere. I mainly blame this on the fact that for some reason The Cave sports hardly any music which clashes with the wacky visuals and ends up conveying a sense that not much is really going on. I see the point in this, being a puzzle platformer it’s probably best to keep anything in the background plain from distracting your mind too much. But when the main gameplay itself is boring, and there’s nothing else going on, you can really see how dull the game can be at times. Not an easy task considering the talent and premise behind the project. But the fact that the game is as zany as it is, and yet manages to be as bland as it is, speaks volumes in itself. 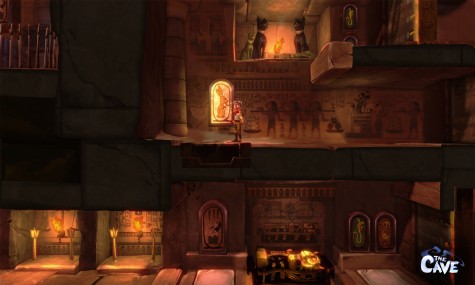 The game controls decently. You are tasked with guiding 3 out of the 7 characters, Lost Vikings style, through the game by switching between each one to hold levers, use items or whatever else is needed of you. The characters all work fine and I was never frustrated with the controls themselves. I never got angry at any perceived miscommunication between the controller and screen, so they did a good job with the fundamentals.

If it seems like I’ve been stalling the gameplay critiques of this review I’ll have to apologize because that’s exactly what I’ve been doing. I really wanted to like this game going in and even as I write this I’m trying to find aspects that I thought were more enjoyable, however when the core gameplay relies on very basic, yet very trite and overly complicated puzzle design it’s hard to sing its praises. 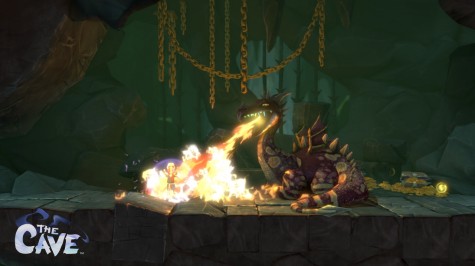 The design is by far the worst part of this title. My main example is that while each character does have their own specific ability, I never really used them, apart from when an arbitrary blockade would be occasionally be thrown down to seemingly prove the validity of even having unique abilities in the first place. There’s a random gate that only one person can get through and will give you a short cut, and that’s about how creative they get with the unique ability puzzles. I honestly don’t think I could explain to you the advantage of say, using the Monk over the Twins as the puzzles rely mostly on using objects on other objects.

That’s the unfortunate truth to the game and the source of all its major problems: it’s designed like a traditional point and click adventure game. There’s no problem with this genre but it just doesn’t fit into what a puzzle platformer is good for. All the puzzles basically play out with you grabbing random objects and trying to grasp the logic of the world which seemingly revolves around whatever the level designers were thinking of at the time. This is proven by the fact that there’s very little platforming in the game. Again this is fine, but The Cave is also a puzzle platformer–one where the puzzles are frankly boring, and the platforming essentially non-existent, but a platformer none the less. It’s not a point and click game, which the back tracking would have you believe. 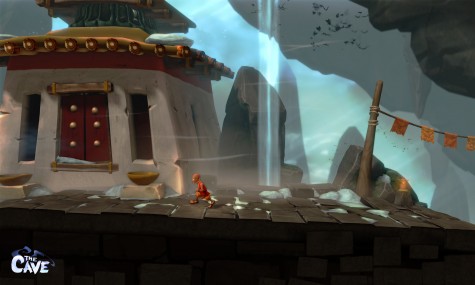 When the puzzles aren’t just being dull they’re being outright annoying. This is something that the game actually admits. At one point it outright gave me a URL with the problem solution plastered onto the web page. At that point I struggle to see why you would even leave the puzzle in if all you’re going to do is tempt me with the solution at my finger tips.

When the puzzles aren’t being frustrating or childishly dull, they’re being vague. The goal of each area is to basically get a key, or move someone so you can descend into the next level, but doing that is always confusing. You’re often dropped in an area filled with paths and objects but with no idea what you’re even trying to do. There are no hints at the smaller objectives in a level, only the overarching message of “try and progress,” making it extremely hard to solve some puzzles when you don’t even know what the puzzle is. It’s akin to seeing half of a question and being expected to just work out what the answer should be even though there’s no clue as to what you’re even supposed to be working out. I have a bunch of objects at my disposal and I don’t even know how doing anything is helping my greater goal of progressing. Solving a puzzle in The Cave feels a lot like running in circles.

If you find yourself wanting to venture back into The Cave you can expect different areas based on the characters you didn’t play as the first time around. The game will alternate its main areas for character themed levels based on the team you picked at the beginning of the game. Essentially this means that The Cave has extra replay value, as half of it will be brand new levels, mixed in with the ones you’ve already traversed. However this doesn’t come off as a way to add replay value to the game so much as a way to add extra time to a short experience. And would you really want to go through half of the game again just to see new levels? Taking into account the amount of switching and dull backtracking in the game I would definitely not. It bored me the first time, so I see no reason to be going through the same old game again. I liked the humor, but not that much. 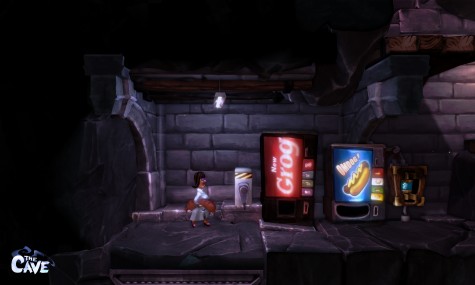 It saddens me that I can’t think of anything better to say about a Sega published Double Fine platformer. Its humor, while never belly-aching, can be amusing. That said, there’s only so much a funny voiceover can do for a forgettable and often irritating experience overall. It’s not a terrible game by any means, but playing it can often feel like going through the same old motions again and again. It’s OK. It’s boring. And for a Double Fine game it’s just not enough. 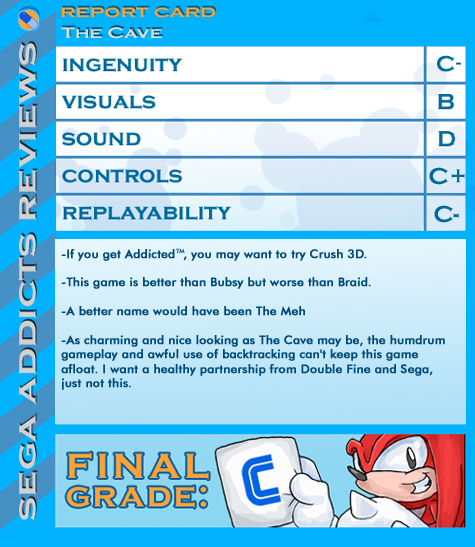 NiGHTS Into Dreams HD remake coming to XBLA and PSN [UPDATE: and PC!]

New Turning Point update for Company of Heroes 2 is hefty