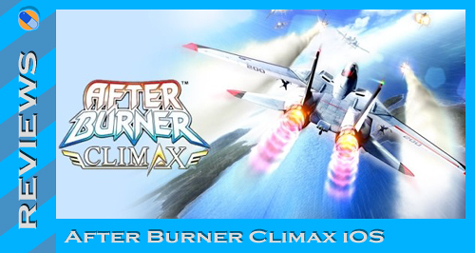 Modern media certainly isn’t shy about regurgitating old ideas to reach new crowds, but there’s no denying that Sega’s corner of the iOS market is especially rife with repackaged ports that boast some gussied up presentation and not a whole lot else. Sure, it’s a profitable (and safe) route to take, but it’s also hard not to be a little disappointed.

Even with that in mind, the announcement of an iOS edition of After Burner Climax had my interest piqued in no small way. That’s because the overall quality of Sega’s iOS ports seems to be improving. The iOS version of Sonic & Sega All-Stars Racing controls beautifully and looks gorgeous, and the virtual controls on the iOS version of Sonic CD are leaps and bounds better than those found in just about any other Sonic iOS iteration.

So if previous vehicular titles like All-Stars Racing fared so well, then surely the largely on-rails control and exceedingly simple gameplay of After Burner could achieve at least a comparable level of quality. Right? 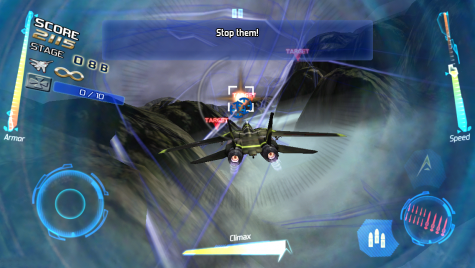 Like piles of Genesis/Mega Drive games before it, After Burner Climax iOS is largely identical to its source material, for better and for worse. Carrying along the original game’s legacy of lush visual clarity, this iOS 6-optimized port does a respectable job mimicking the gorgeous set pieces and vehicle models that made the original such a treat for the eyes. From molten wastelands to the starlit caverns, fighter jets to massive airliners, it’s very obvious that a lot of attention was put into optimizing these visuals to make full use of the iPhone’s power. The sound design achieves this to an even higher level, with each song, sound effect and voice pumping out of the iPhone’s speakers as clearly and triumphantly as they do on any television.

Of course, such visual and aural clarity is bound to beleaguer hardware that’s even a single step down from the peak platform. Playing the game on my iPhone 4, I experienced some serious framerate issues, especially in cloud heavy stages or environments overburdened with extraneous visual touches. Inter-stage loading screens could drag on for up to twenty seconds, yanking back the leash on a game whose source material is founded on blinding speed and peppy pacing. This isn’t necessarily a drawback to the game, but it is something to consider if you have a lower end iDevice. 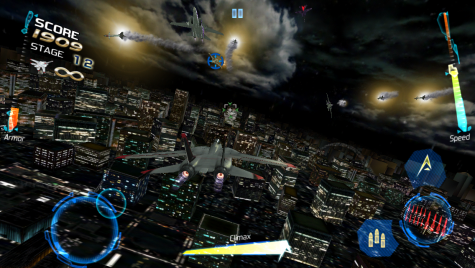 But even if played with the very best iDevice, all the visual clarity in the world can’t help an unwieldy control scheme. Like so many iOS ports before it, After Burner Climax does its damnedest to translate a physical control scheme to a virtual one, trading out precise analog sticks with vague, unresponsive swiping along the bottom of the screen. Luckily, the window over which you can place your thumb isn’t too restrictive, making it far more playable than a lot of virtual analog sticks, but even with that luxury, I struggled to get to a point that felt even remotely as empowering as the original game. Targeting enemies is a crap shoot, doing barrel rolls is a frustrating chore, and using the time-altering Climax Mode is nowhere near as exciting as it once was. Even the simple act of speed boosting—now done by reaching your thumb over to the right side of the screen to pull up on a meter—is so cumbersome it’s rendered useless. 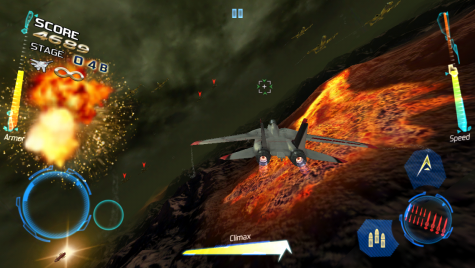 This is especially aggravating in the already annoying canyon stages. Originally, these confined corridors offered a new twist on the basic formula of After Burner, making you control your plane on a dime through narrow, unforgiving mountainous regions, sometimes avoiding obstacles, sometimes chasing after another plane. However in this version of the game, these regions go from annoying to nearly unplayable. I would go through entire continues in a single stage, just trying to increase my speed enough to stay on the tail of an enemy, all the while desperately flailing side to side with controls that just couldn’t keep up with my commands.

I did eventually find myself growing reluctantly acclimated to these controls, at least when it came to open air stages. Once that frustrating learning curve is ascended, certain chunks of the game have the capacity to at least offer a shallow mimicry of what makes the original so satisfying. It’s no After Burner Climax on XBLA, but this game’s base thrill and low-risk progression at least deflates the frustration of dying a little bit. Not to mention the aforementioned stunning visuals and sound. 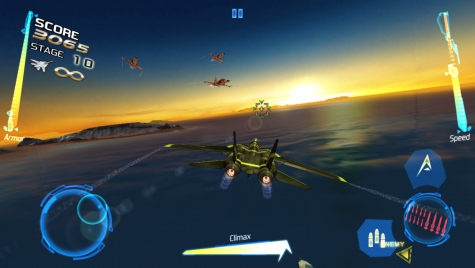 If you just can’t bear the thought of touch controls, After Burner Climax iOS does also offer an alternative tilt control scheme. Since so many games utilize such a scheme, I had hoped that it would behoove another vehicular game based on speed to offer that option. But because of the added directions of up and down, as well as targeting, tilting just doesn’t apply well to Climax’s setup. The game even reminds you over and over to continue toggling with the calibration, struggling to maintain some modicum of precision. Perhaps tilt controls could still work for an After Burner game, but not when such a scheme is slapped over a game that was built from the ground up with a completely different set of controls in mind.

Really, that’s the fatal flaw with After Burner Climax iOS. Those at the helm have probably created the best possible virtual control scheme they could to transfer as much of the original experience to the iPhone’s screen as possible. But this is a game that was originally developed without a touch screen in mind, and simply regurgitating the exact same game with an ill-applied, forced new control scheme is simply not enough to translate it to a completely new and vastly different platform.

I would eagerly play a new, original After Burner sequel any day, built from the ground up with iOS capabilities at its core, but for now the beauty of this port just can’t distract me from its woefully misrepresented roots. 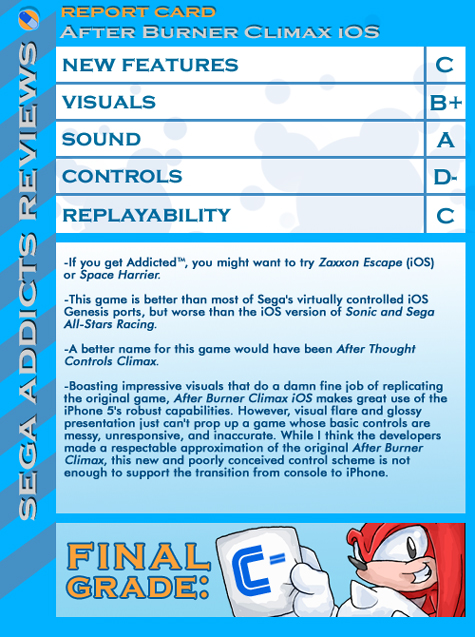