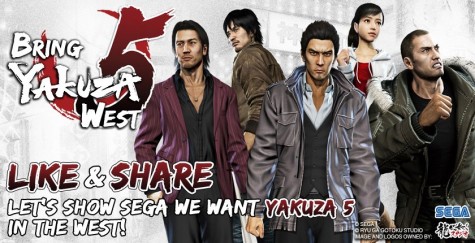 With more than 23,000 votes under its belt thus far, The Hatsune Miku Facebook Coalition of America (which I have just decided it is called) has proven to be quite the successful campaign thus far. It only makes sense, then, to try the same tactic with the other oft-requested and well-deserved localization, Yakuza 5.

Earlier this week, a campaign was launched on Facebook to bring the latest entry in Toshihiro’s fantastic crime saga out west. As of this writing, the petition has just crossed 1,800 votes in just a few days, and hopefully that’s just the beginning of the Yakuza lovefest. If you don’t know why we’re so avid about getting this game out here, go play any Yakuza game and you’ll see what I mean. Go ahead, I’ll wait…

If Sega is going to officially back campaigns to bring us a mascot we’ve barely ever seen on western shores, then hopefully they’ll at least pay attention to a completely fan-fueled plea for the latest entry in a well-established series. We’ve been whining about it for nearly a year here on Sega Addicts. It’s nice to see that somebody is now trying to do something about it.

Thanks @YakFan, and good luck!

Japan getting a Yakuza 5 demo next week, Westerners get to be jealous

Yakuza 5 outsold the Wii U launch in Japan