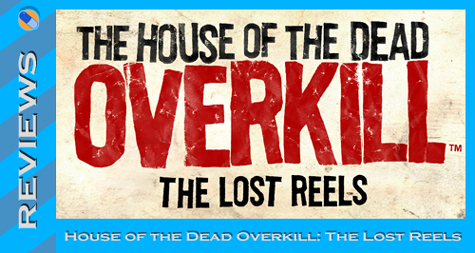 As smartphone gaming has sunken its alluringly frugal hooks into the industry over the past several years, the simplicity and quarter-eating addiction of the arcade experience has at last migrated to a new nest, thriving in a mobile market that is rabidly consumed, habit-forming, and supremely affordable.

That’s probably why, despite my ongoing vitriol for virtual controls, I squealed with joy at the news of a mobile spinoff of the arcade-flavored House of the Dead: Overkill. Even as other shooters weigh us down with RPG mechanics and unnecessary, sweeping storylines, House of the Dead‘s bony grasp remains tightly wrapped around the skeletal framework of the on-rails shooting and the hilariously absurd plots of its predecessors.

That common link—the spirit of the arcade—is why an iOS/Android HOTD makes so much sense. But based on Sega’s uneven history with iOS ports, you couldn’t blame me for harboring a little bit of apprehension…Could you? 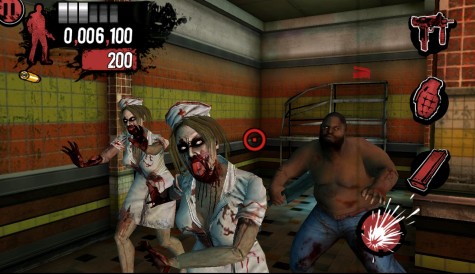 Ninety-nine percent of the time, my chief concern with playing iOS ports or spinoffs of larger games is the translation of the controls. With Overkill – The Lost Reels however, I found myself much more concerned about the atmosphere. While everything about the original gameplay has been done a thousand times before, Overkill’s gleefully scuzzy grindhouse ambience, gravel-voiced narrator and shamelessly profane script are what set it apart. Could a smaller, more basic version hope to boast that same level of gore-soaked charm?

Luckily, a few of my most glaring fears were assuaged almost immediately. From the very first frames of scratched, jumpy film you see upon booting up the game, it’s apparent that the passion for sleaze that made the original title so beguiling is still at the wheel. Much of Overkill‘s assets have made a nearly seamless transition, with audio tracks, zombie designs and areas looking and sounding as triumphantly depraved and disheveled as ever.

That said, perhaps the most critical assets to Overkill—the ridiculously entertaining voices of Isaac Washington and Agent G—are nowhere to be found. Cutscenes and characters are gone completely, traded out for a handful of comic book panels and voice bubbles. While I will grant that cutscenes and voiceovers would probably make this game far too large for the iOS platform, the omission of these two defining characters drains Overkill of quite a bit of its aesthetic appeal. 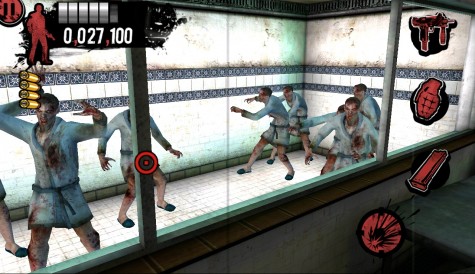 Once that jolt of disappointment finally faded, I found myself confronted by another surprise of a much more pleasant variety. Unlike so many mobile ports before it, Overkill – The Lost Reels plays remarkably well. Using your invisible D-Pad to direct your reticule across the screen is surprisingly precise, and the rest of the beautifully translated layout makes reloading your weapon, switching your weapon, and throwing grenades a cinch. As with any virtual control scheme, the lack of tactile buttons can occasionally leave you flailing in more intense moments, but considering the platform I’m not sure they could have done a much better job with this scheme.

It’s obvious that developer Magic Pockets have ventured beyond simply porting the original game, and have even added minor modifications to help the transition. Chief among these subtle changes are three little indicators that pop up while you are blasting away at zombies: “Headshot,” “Sniper,” and “Block.” Shooting zombies in the head, from a distance, or while they are attacking increases your score significantly. While these indicators aren’t particularly original, they do go a long way to help shift the focus of the game to high scores, giving The Lost Reels much more of an addictive iOS feel.

It may sound unlikely, but the gameplay of The Lost Reels manages to simplify Overkill‘s original formula even further, turning an already bare-bones on-rails experience into a storyless, arcade-style gallery shooter that’s based less on upgrades and progression and more on hairtrigger timing and practiced skill. At its best, The Lost Reels strikes an refreshing balance between old and new school, a combination that has been known to hook me in the past. 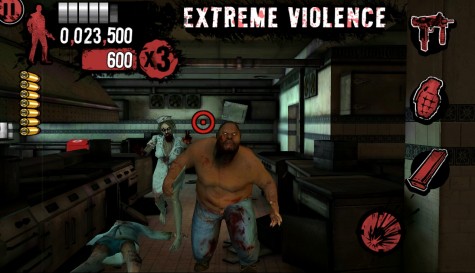 Which leads me to the most egregious flaw dragging at every corner of this otherwise impressive port. While the enjoyable gameplay certainly has the capacity to inspire an iOS-style “just-one-more-game” addiction, Lost Reels is utterly shameless about capitalizing on that desire in every way it can. Instead of offering several environments to explore, Lost Reels takes just two of the least interesting environments from the original game—“Papa’s Palace of Pain” and “Ballistic Trauma”—and splits them up into five mini-stages each. Some of these miniature versions even overlap one another, sending you on deja vu-enducing quests that drag your through a handful of the same rooms several different times.

This wouldn’t be so irritating if the lack of options didn’t force players into such an unfair corner. You see, Lost Reels has a dramatic learning curve that kicks in before the end of “Papa’s Palace of Pain.” With overly long stages and a complete lack of check points, players have no choice but to pony up the dough they’ve earned in-game to upgrade weapons, health, etc., so that they can manage to survive long enough to progress. Since there are so few stages available, and since weapons and upgrades are so expensive, you are forced to choose between replaying the same stages repeatedly to slowly earn more money or open your real-life wallet and essentially pay to progress. For a game that’s already $5.00, that’s ridiculous. 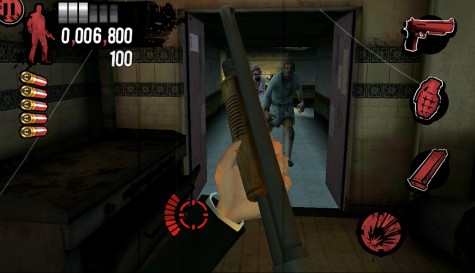 Making matters worse, some of Lost Reels’ greatest assets are intentionally hidden behind money-locked doors. “Naked Terror,” The Lost Reels’ very best stage, is only available as an extra $1.99 purchase, effectively denying players not just an extra stage but two extra characters. The sadistically satisfying “Goregasm” combo meter, another hilarious element that sets Overkill apart, is shamelessly restricted behind absurd “Combo Upgrades” purchases that offer higher multipliers. Yep—you actually have to pay to get a higher combo. Luckily, unlike “Naked Terror,” Combo Upgrades can be purchased with money earned in-game.

It’s this relentless nickel-and-diming that leaves me so conflicted with House of the Dead: Overkill – The Lost Reels. The more I played the more I enjoyed it, and because of minor additions like character-specific talents (Washington’s weapons do more damage, G’s recoil is reduced, etc.) I actually found this miniaturized, simplified version of the original game to offer a kind of skill-based addiction that its big brothers didn’t. But even considering those achievements, I was continually shocked to see how far this game would go to squeeze its players of even more cash—even if it means stunting the initial product. 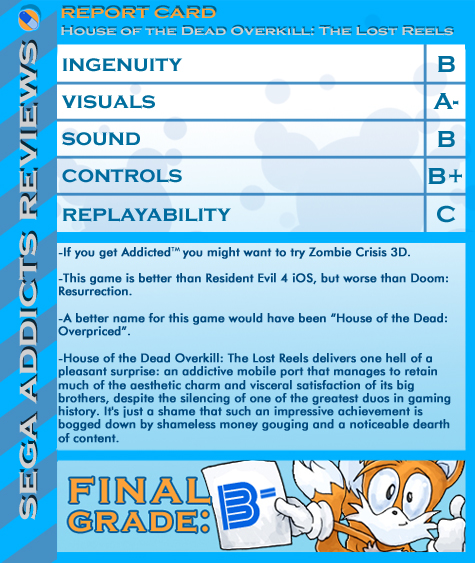 Alexandria Bloodshow has a launch trailer