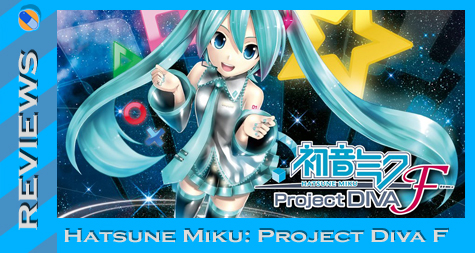 Hatsune Miku is kind of a big deal. While she may not have the name recognition of a Miley Gaga or a Kanye Bieber here in the West (I am very hip and with the times, clearly), she’s the face of the multimillion dollar media juggernaut known as Vocaloid in Japan. Since her release in 2007, Miku and company have turned the once-disregarded software into an absolute monster, spawning thousands of songs, several anime and manga like Black Rock Shooter, the upcoming Kagerou Project, and the Sega-produced rhythm series known as Project Diva.

Now, the leek (or bacon-wrapped hot dog, if you prefer) obsessed J-pop princess is setting her sights westward. With English voicebanks being released, as well as several live concerts and commercials being done for American audiences, it was only a matter of time before Crypton and Sega brought her critically acclaimed games over as well.

Does Project Diva F turn in a five star performance? Hit the jump to find out. 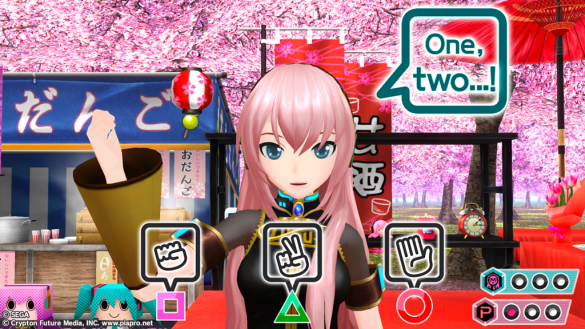 Going into this, even as a Vocaloid fan, I honestly was expecting a rather barebones experience. I’m not sure if it was because of how the demo was presented, or the absolutely dreadful lack of advertising and hype from Sega, but sadly I wasn’t expecting much more than “play song, press button, leave after a couple days.” Thankfully, that is NOT the case here. Every feature from the Japanese version has been left intact, from the songs themselves to the dating sim-ish Diva Rooms and the Editor Mode.

Diva Rooms are a fun little distraction, and it is kinda fun to see the various reactions to the gifts you can buy the Vocaloids, but there isn’t very much to do with the characters other than buy them gifts, pet them, or play an admittedly fun rock-paper-scissors game with them. After a couple days I stopped messing with it and just focused on playing the songs again.

As for the Editor Mode, it can be a very cool feature when put in the right hands (as seen here). If you’re only focused on making a fun song to play, it’s pretty simple to work with, but making the videos themselves is far more complicated than it has to be. If you remember Create-a-Taunt from the older WWE Smackdown! games, where you had to try to piece together animations to make something that might be passable, it works like that, but somehow worse. Still, I was able to make a couple fun levels with it, so as long as all you care about is pressing buttons to your favorite song, it’s a great feature. 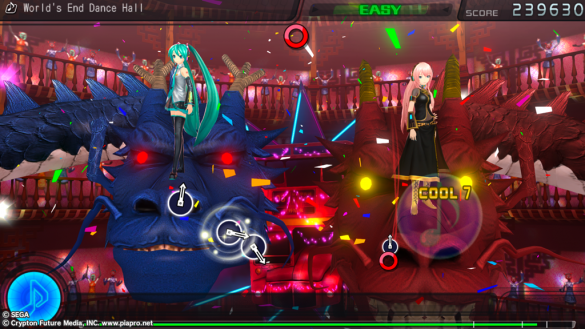 Now that that’s out of the way, let’s dive into the meat of the game. Graphically, PDF is absolutely gorgeous. Character models are well animated and incredibly expressive, and the music videos that play for each song are excellently done. This isn’t all sunshine and rainbows though. At times, I felt that the videos looked TOO good, interfering with the display of icons and such. While I suppose this is by design to make the game more challenging, there are few things more frustrating than having a perfect run going and then losing it because one little icon blended in with the scenery too well.

The song selection is pretty much the best of the best when it comes to Vocaloid. While there’s a couple songs I’d wished made the cut (though this is fixable in Editor Mode), I was very happy with the track selection, and even managed to find some new favorites in the mix. Also, a few of the songs have been remastered just for the game, and have never sounded better. If I had just one nitpick, it’s that switching Vocaloid models in the customize menu doesn’t switch the songs to that Vocaloid’s voicebank as well. While this is hardly important, and I’m betting it would’ve been a nightmare to include, it still would’ve been a neat feature. 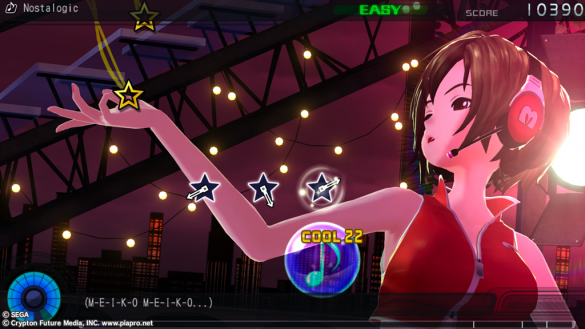 The most important thing is, the game plays great. I’ve played a lot of rhythm games in my time, and I’d have to say this is one of the best. It’s also one of the most soul-crushingly brutal ones as well. Even on some lower level tracks, you’ll get torn apart if you lose your pace for even just a split second. And Extreme mode? We don’t speak of that. EVER. If I end up having to have shoulder surgery by the time I hit 30, I can look back on the time I attempted “Secret Police” on Extreme as the start of all my problems. But the difficulty isn’t really a detriment. It simply makes getting those rare Perfects even better. The only real disappointment is the lack of any sort of multiplayer whatsoever, even though PDF had loads of potential of being a fun DDR-esque party game.

If I were to mention any other issues with the game, aside from the little bits covered above, it’s that the other non-Miku Vocaloids don’t get nearly as much love as she does. There’s over 40 songs and hundreds of custom items and outfits in the game, but the majority of them are for Miku. Yes, I get that she’s the star, her name is in the title, and she’s responsible for this whole deal, but it would be nice to see more showcases or items for someone like Luka or Meiko.

Another nitpick is how little actual localization has happened here. Sure, it’s not really a game that needs a whole lot, but they didn’t really bother to localize anything outside of menu descriptions, or pointlessly changing the names of some songs. For example, “Torinoko City” was a fine name for one of the songs, there was simply no need to change it to “Urbandonment”, and I can’t imagine the creators of the songs would be thrilled with that sort of thing either. The biggest bother to me, though, is that the lyrics that run across the bottom of the screen aren’t translated, but simply romanized. Having actual translations of the lyrics instead would’ve helped people get into the songs easier, I think. 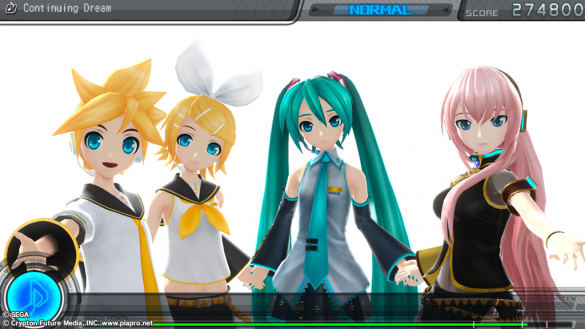 At the end of the day, though, the only thing holding Project Diva F back here in the States is the disturbing lack of advertising and hype it’s gotten from Sega themselves. It’s the same thing that come back to haunt the publisher when it comes to titles like Yakuza or Anarchy Reigns. If you weren’t actively following the Vocaloid or Sega scene, you probably would have no idea this game even existed, and that’s a huge problem. You don’t grab a license as big as Miku is and then not say anything about it outside of Facebook or Twitter. That’s simply asking for it to fail, no matter how good the game actually is.

Those last couple rants aside, Project Diva F is a very fun game, and most definitely the best rhythm game I’ve played in years. It has enough fan service to keep longtime followers of Miku and her colorful posse happy, and at the same time it is a great entry point for those who have an interest in Vocaloid but don’t know where to start really. It gets my full recommendation, and I really hope it does well enough to bring Project Diva F 2nd out west as well.

Just don’t play on Extreme unless you have a high tolerance for pain, physical and mental. 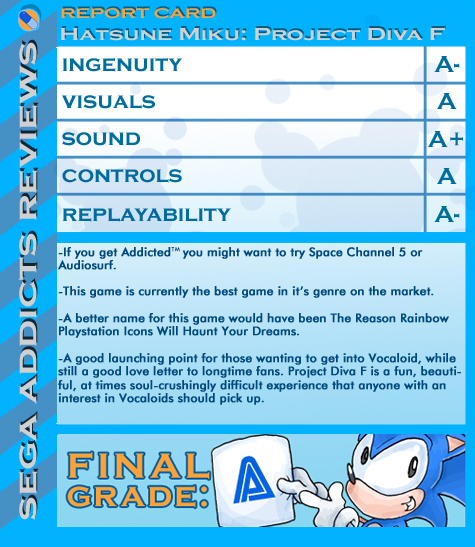 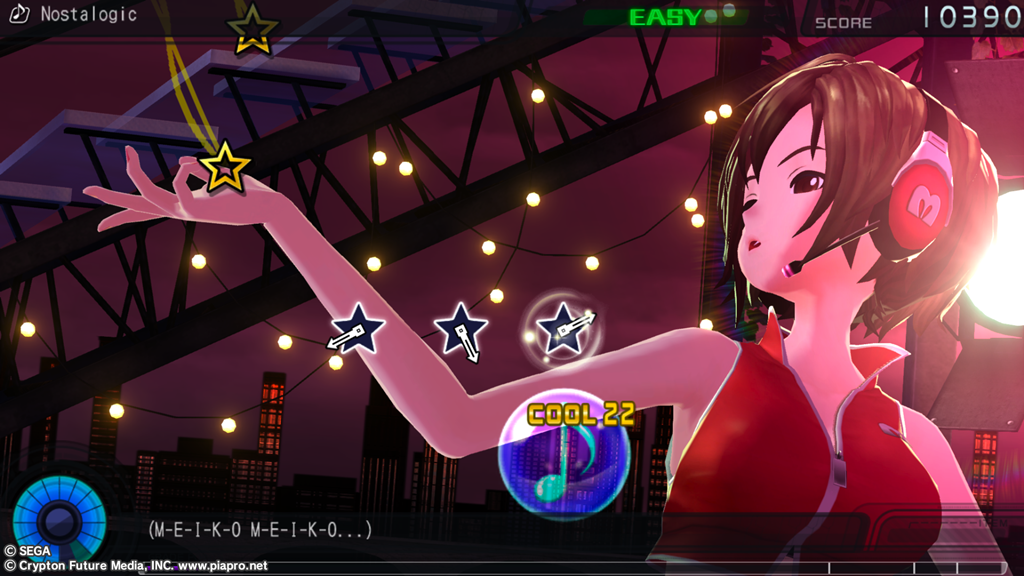 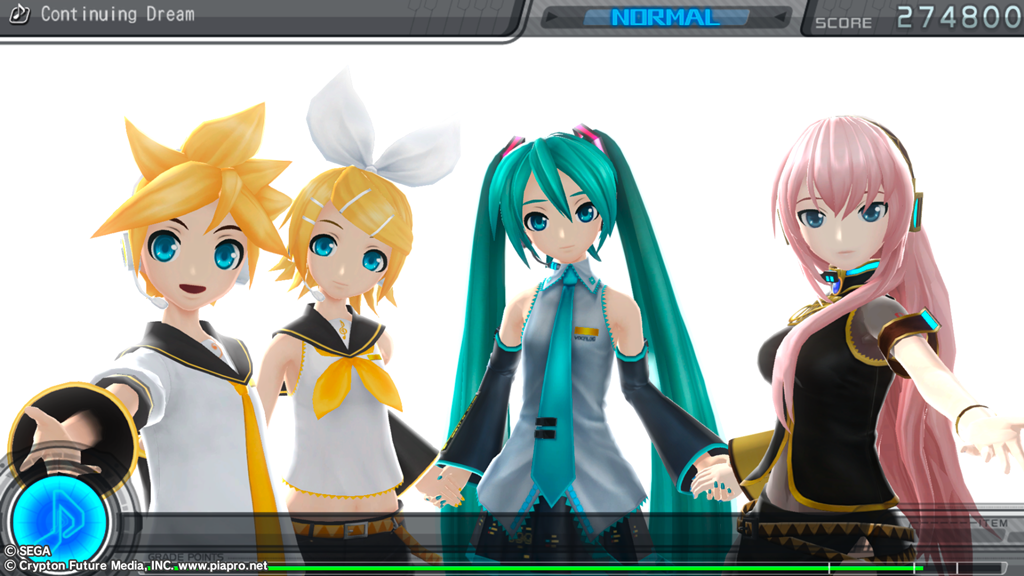