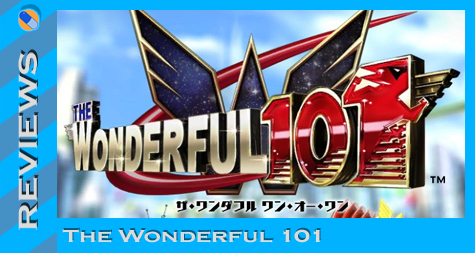 When Capcom closed Clover Studios, almost the entire team re-emerged under the name of Platinum Games and gave us many incredible titles in this generation of consoles. Most of them were published by Sega, with Konami’s Metal Gear Rising: Revengeance being the only exception.

And now starts a new chapter in the history of our favorite action-maniacs with both Nintendo partnership and a brand new next-generation console. Ironically enough, The Wonderful 101, a game that begins a new era for Platinum Games is a spiritual successor to Viewtiful Joe, the very first game Clover Studios have ever created. Both titles are brainchilds of Hideki Kamiya and both are on the Nintendo console. If your head still intact after this dose of irony, wait till you hear about the actual game. 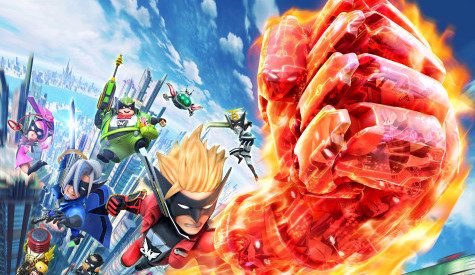 The game tells a story of a superhero team The Wonderful 100 which defends the Earth from an invasion of aliens called the “GEATHJERK.” Much like Viewtiful Joe, The Wonderful 101 is heavily inspired by tokusatsu shows like Kamen Rider or Super Sentai. So you can expect a lot of silly things happen on the screen. The game never takes itself too seriously and at the same time tells a very engaging story filled with plot twists, character development and insane amounts of energy.

Surprisingly, the characters are the best part of the narrative. They start off like a bunch of silly racial stereotypes and grow into very fun personalities. My favorite is Wonder Blue who is like a bizarre mix of Raphael and Michelangelo from Teenage Mutant Ninja Turtles. Giving us both some laughs and some serious moments, the story strikes a good balance between drama and comedy.

Back when the game was named Project P-100 and I saw the first gameplay video, I had no idea what to expect or how it will even play. Even now I’m sort of struggling with the explanation, but I’ll try my best. While The Wonderful 101 looks like Pikmin, it plays a lot like Hideki Kamiya’s previous work, Bayonetta. It’s a character-action game, only instead of one character, you control an entire army. 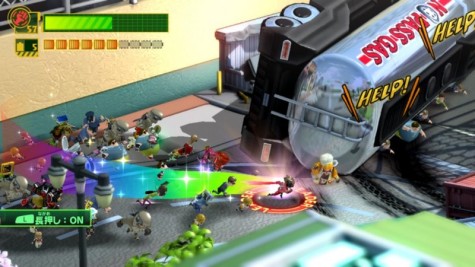 Your main method of attacking is the team’s unique ability to Unite Morph. For example, Wonder Red can turn his comrades into a giant hand. Overall, there are 7 main types of Unite Morphs: Fist, Sword, Whip, Gun, Hammer, Claws and Bomb and many additional ones. Just about every ability is based on this mechanic. For instance, to block you turn into a giant jelly and to dodge you turn into a spring. Unite Morphs can be upgraded to much stronger versions if you have enough people in your team and enough energy in your Unite Gauge. You usually don’t start with 100 characters in your team and most of the time you have to collect citizens and soldiers and turn them into your temporary superhero friends. It’s the game’s weird way of saving citizens–don’t ask.

Unite Gauge is your second source of energy, allowing to transform into all sorts of different things. To make it longer you collect batteries throughout the level. By collecting more people and managing your Unite Gauge, you can make much bigger and more powerful versions of Unite Morphs. You can also do two different Unite Morphs at the same time to keep your combos flowing. Add to this a pretty decent move set for each Unite Morph and you have quite a complicated battle system. I guarantee that you will be lost in the first 30 minutes, but once you learn how everything works, it becomes one of the most fun, creative and elegant battle systems out there. 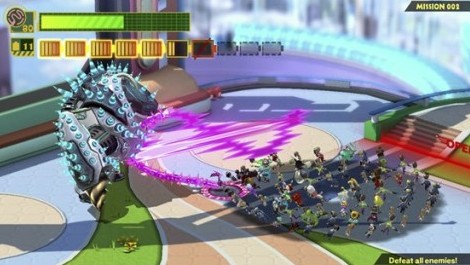 Enemies range from small groups of gunners to huge mechanical dragons and turtles. Each with a very cool design and unique weakness to certain Unite Morphs. So you can’t just keep spamming the same move over and over again. You have to constantly adapt to various enemy types. Bosses are completely insane at times and make Bayonetta final encounters look like child’s play. Of course, you don’t pound enemies into the ground all the time, even though it’s an action game.

There’s also a decent amount of exploration and puzzle solving. At times, the game even feels like a session of WarioWare, when you’re forced into completing some bizarre objectives in short periods of time. Very often The Wonderful 101 transforms into a shoot’em up or a very specific Nintendo game which I won’t spoil. Remember how Hideki Kamiya put a bunch of references of Sega games into Bayonetta? Well, it’s the same here, only with Nintendo games.

The Wonderful 101 is not a terribly hard get game to get through. The difficulty rather comes from learning how to play the game well. Like Bayonetta and other Platinum games, it has a ranking system which rates your abilities by three categories: Time, Combo and Damage (that you took). Every enemy encounter or set-piece gives you a ranking, and the end of every mission you get a summarized result. The familiar system once again works flawlessly and motivates you to be creative with your arsenal of crazy abilities. 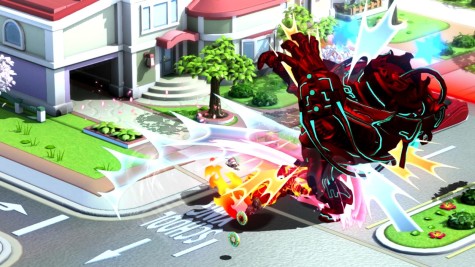 The real challenge comes from the game’s controls and its own ambitious nature as at times it expects a bit too much from you. To change Unite Morph you draw a certain figure with either your right stick or using the touch screen. Most of the time it works just fine, but you will occasionally have some difficulties drawing more complicated shapes in the middle of battle. I recommend not sticking to one or two methods of utilizing Unite Morphs, but instead mixing it up. Some shapes are easier to draw with the right stick, while others are better handled with a help of the touch screen. Remember my advice, since it might save you from a couple of rage quits.

My only real complaint regarding controls is about certain gimmicky sections where you are forced to go inside buildings to solve puzzles. During those you look on your GamePad screen to see what is going on inside, and since the right stick is set to drawing Unite Morphs, the camera controls by moving your GamePad around. So instead of the usual fixed camera angle, you get a very claustrophobic perspective in which even the slightest movement of your controller can send the camera flying up some character’s butt. Thankfully, these sections are very few, so they won’t ruin the whole experience. 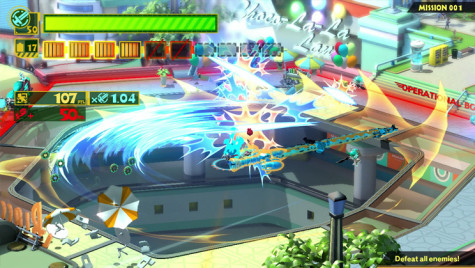 As for the presentation, The Wonderful 101 looks like it stole all the color in the world. It’s simply one of the most visually exciting games out there. And with all the intense action that is happening on the screen, it still runs at smooth 60 frames per second. Occasionally you might notice some characters lacking in detail, but considering how much objects and characters overall are twirling in a crazy rainbow tornado at the same time, the game still manages to impress. The soundtrack consists of some truly epic songs that support the action pretty well. It might be not as good or memorable as Metal Gear Rising: Revengeance or Anarchy Reigns, but it still stands strong, especially the main theme.

The Wonderful 101 is a gigantic game, offering a meaty 13-16 hours campaign and a bunch of challenge missions that you can play with up to five players. There are also a lot of secret missions and upgrades that can completely change the way you battle your enemies. Add to this a ranking system that makes you want to get better and achieve a Pure Platinum award on every mission and you have a really busy month. For secret-diggers like me, there is an especially interesting quest to collect every The Wonderful 100 hero. You don’t start with your whole team intact, so you have to collect them all around the world. By doing so, you can acquire some really powerful Unite Morphs on your second playthrough. And it’s just downright fun to collect superheroes with names like Wonder-Toilet. 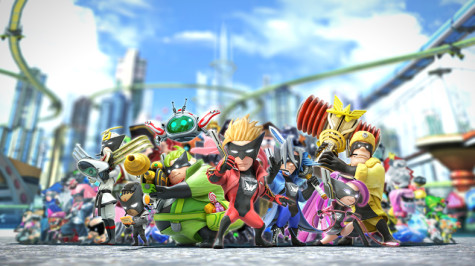 If you played a Hideki Kamiya title before, you know that he loves to put certain things in his every creation. There is always a ton of references to the previous works, there is always a rival battle and there is always an amazing final encounter in space. And let me tell you, you are not ready for the crazy things that await you in this game. I don’t want to spoil anything, but I just want to say that I was jumping around the room in excitement during the final boss fight.

The Wonderful 101 reminded me of the happier days when I was a kid. When imagination reigned supreme. It also reminded me why I love video games. Platinum Games’ latest title is simply one of the most unique, imaginative and insanely fun games on the market, even with its occasional control issues. If you were waiting for a game that will sell you a Wii U, this might be it. Because nobody in their right mind should miss this wonderful gem. 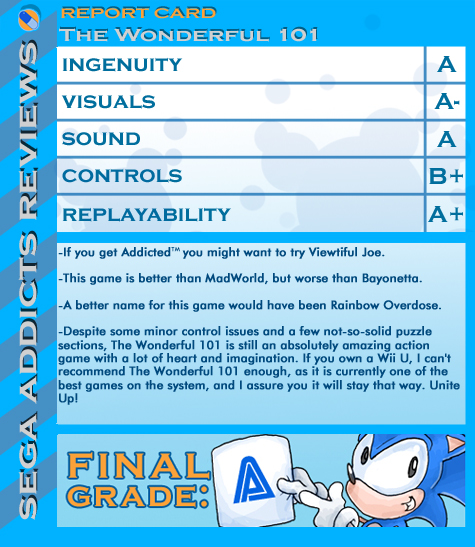