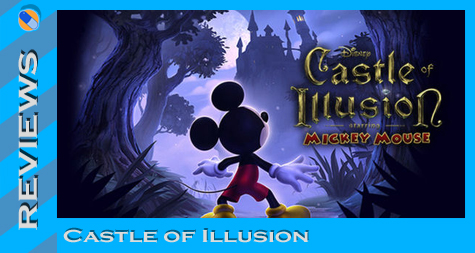 Also available on PSN and PC

The original Castle of Illusion Starring Mickey Mouse is a game that pre-dates even the original Sonic the Hedgehog, and as such is way ahead of its time. It featured great animation and a charming score which was obviously memorable enough to stay in the minds of the many Mega Drive/Genesis gamers of yore. So here we have this unexpected remake. Completely redesigned from the ground up, this new adventure aims to capture the spirit of the original, and maybe remind us of what made gaming so unforgettable for Sega fans to begin with. Even its name comes with a certain amount of expectation, so you wouldn’t be forgiven for becoming apprehensive at the mere thought of retooling many peoples’ beloved childhood Disney game.

If there’s any character that can keep that childhood magic going, it’s Mickey Mouse. However no matter what character it is, nothing can save a game from fundamentally bad gameplay. So is this game a lovingly crafted childhood reboot, or a lame nostalgia cash grab? Hit the jump to see more and find out! 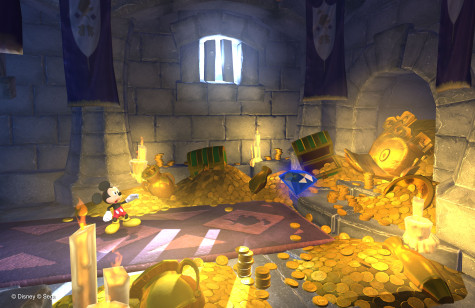 The first thing I think anyone will notice upon booting up Castle of Illusion is just how damn charming it is. From the jolly, lively visuals to the cherry (if somewhat unnecessary) narration, the game just screams personality from the get go. Suffice it to say there’s a certain cartoonish appeal to this adventure right from the start that never lets go, and it’s always a joy to just experience the games atmosphere as you go along. The story is a pure recreation of it’s retro incarnation, but it’s the way it’s presented that makes it seem like something more. The narration just brings the game to life and makes these seemingly unconnected worlds feel like they have a place in a grand adventure. It’s a nice touch which really adds to the experience and makes it more than just a ‘hero saves his girlfriend’ set up.

That would be all for nothing if the game didn’t play well, and I’m happy to report that in the pure 2D sections it indeed does. The controls feel very smooth and even though the jump takes a second to get used to, it all flows so well that you feel very comfortable with the way the game works within moments. There’s no slipping and Mickey stops on a dime, meaning that some of the more intense platforming sections never really feel like your fault. 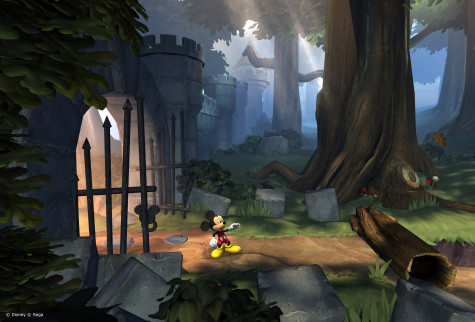 But there is a reason I added ‘2D’ to the above paragraph as Castle of Illusion does tend to mix its gameplay up very often. This will amount to short 3D sections where for example you could be partaking in some Crash Bandicoot reminiscent forward running. These sections never feel quite right and are definitely not as tight as the strictly 2D sections. Even when you aren’t constantly running, the 3D challenges the game presents you with often feel floaty and almost slippery. This is especially noticeable in some of the harder parts of the game. One section consists of platforming on disappearing cards which never feels precise because of the controls in this 3D space. In times like these it’s very hard to judge just where you are going, and this leads to a sense of unfairness–a sense which thankfully isn’t felt much due to the spaces between these (often avoidable) interludes.

Although these 3D segments can get annoying, the design for the core of the game is mostly pure bliss. Even though the stages are based on levels from the old game, the creativity still shines through. The set up of an ever changing castle gives excuses for Mickey to be in any setting, from a forest to a clock-tower, to just being extremely tiny. Sega Studios Australia put a lot of love into these recreations and let their imaginations run wild with what the retro title set up. There are a few visual easter eggs which really add to the scenery and the bright color palette and environments just make the screen pop.

Each world has its own personality, and although it may be a remake, Castle of Illusion uses this status as a launching pad for more fun visuals instead of resting on its laurels. The team really tried hard to make the game feel like its own world while still remaining faithful and you can definitely see that shining through in the games excellent theming. 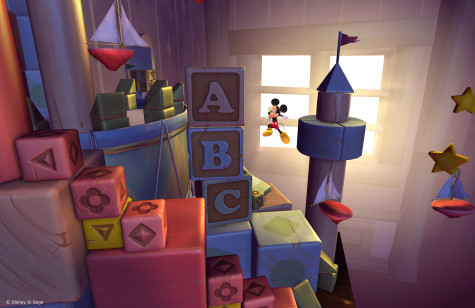 Don’t let the simple cartoon charm fool you though. The levels themselves are surprisingly hard. Although the origins of this game hail from the old retro titles I honestly did not expect this new game to continue that challenge. However I was proven very wrong as Castle of Illusion does get extremely challenging. It may be a bit of a shock as the first world seems fairly innocuous but trust me; after that the game takes a turn for the very hard. It’s a move which is much appreciated by me as it never feels unfairly hard due to it’s aforementioned tight controls.

If I were to point out one frustrating feature though it would be the very outdated life system that the game employed. A lot of modern platformers are taking out the concept of lives altogether as it represents an outdated mechanic that only adds to frustration, but never to gameplay. It is then very annoying that Castle of Illusion uses this old system, as when you clear an especially tough part, you are often forced to repeat it due to far-apart checkpoints or dying later on. I appreciate that this is based on a much older game, but some systems just don’t need revisiting in this day and age, especially when it recreated the old challenge so well.

Another aspect of the design I didn’t appreciate were the all-too-frequent swimming stages. Over the course of his journey, Mickey will have to traverse a couple of lengthy underwater levels which can get really aggravating. The swimming controls are just plain awful, and while Castle of Illusion is certainly not the first game to feature underwater stages, it does use them more than I would expect from the usual platformer. Dropping these could have made this a much better game, as the swimming simply isn’t fun. It may not even have been too frequent itself, but they certainty feel long and take up way too much time than they should. 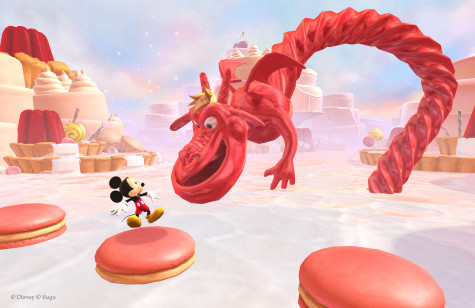 This could be said for the boss fights as well. Although the character design of these baddies are fun, all they consist of are boring pattern memorization. The only thing these fights tend to challenge is your patience, since a lot of what you’ll be doing is waiting for that one period of time when it’s safe to attack. This is very clear when it comes to the final fight, which uses the 3D controls and is annoyingly lengthy to the point where it doesn’t really feel fun anymore. The final encounter is by far the worst and the bosses are a real let down since they look so kooky in design, but aren’t any fun in execution.

That said, I don’t want to come down too hard on the game, because it is a very enjoyable and charming experience, if a short one. There are 7 mandatory gems to collect stretched across only 5 worlds, each of them consisting of only 2 main levels. And while the stages are considerable in length the whole experience only adds up to a couple of hours. Even though this is how it went down in the original game I feel that they could have beefed up this remake considering the modern price tag and context. I actually managed to finish it in one sitting, and while it may seem like an awesome time to experience a quick nostalgia blast, money-conscious gamers may want to rethink this purchase before they spend $14 (1200 MS points) on such a speedy experience. A charming experience, but a quick one none the less. 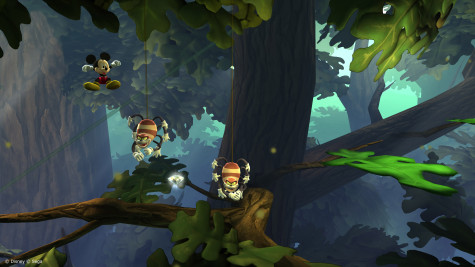 The only real problems that come from this remake are the leftovers from the old school platforming era, which for better or worse this game represents very well. There are a ton of nods to the original Castle of Illusion with references that only a few veteran players will get. You can even switch to the original score giving an overwhelming sense of nostalgia. But I do think the good outweighs the bad. While it definitely has it’s shaky moments, the overall package is just too delightful too ignore. It’s a great tribute to an absolutely wonderful predecessor and if you can overlook some small flaws there’s a lot to be loved, with a lot of love going into it. While it’s such a shame that Sega Studios Australia was shut down before they could make anything after this, Castle of Illusion is a fine legacy to leave behind, and a great hallmark of quality to boot. 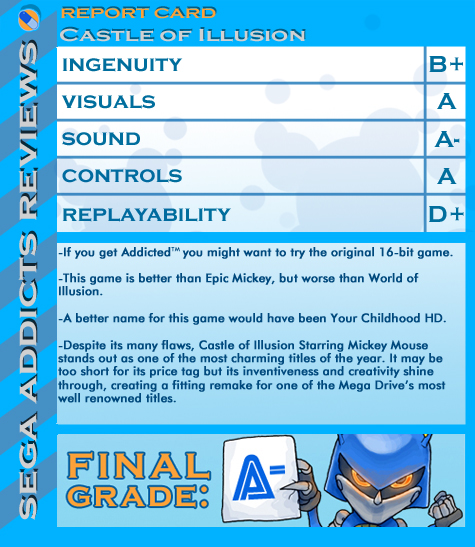