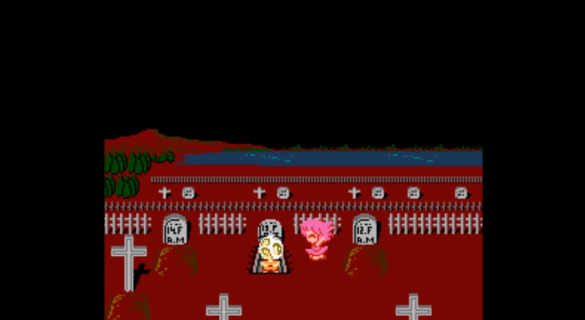 Splatterhouse Wanpaku Graffiti, despite being the first game in the series to appear on a home console, is somewhat of a left-field oddity for the series. The shock and ultra-gore of the arcade original finds itself replaced by super-deformed chibi characters wielding the cutest little axes you ever did see. It is not just the appearance that is startlingly different; the action emphasis of before is replaced by a focus on platforming, and the difficulty is far more suited to an environment devoid of pockets filled with tantalizing ¥100 coins. Nevertheless, a great many of the series’ hallmarks remain and, for all the divergence from its older brother, Wanpaku Graffiti is undoubtedly a Splatterhouse game at its core. 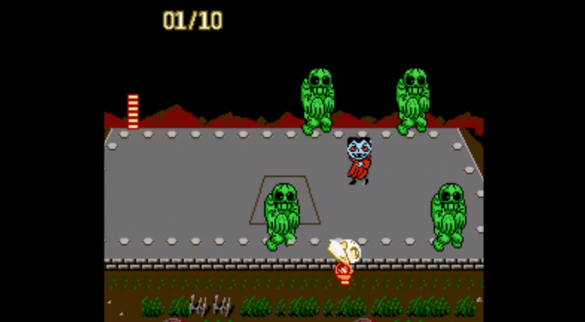 Across the series’ long life-span, Splatterhouse has engaged playfully with pop culture in its portrayal of horror tropes. Wanpaku Graffiti clearly believes the original Splatterhouse to now be part of that culture, opening up the series to love-filled parody and self-referential irony. Whilst there are clear homages paid to the likes of Thriller (some time before Sega’s own Moonwalker game), Alien and The Fly, various levels from the original Splatterhouse are given the same treatment. The poltergeist ridden house and the church make an appearance, identifying Wanpaku Graffiti as the ‘Scary Movie’ to Splatterhouse’s ‘Scream’. 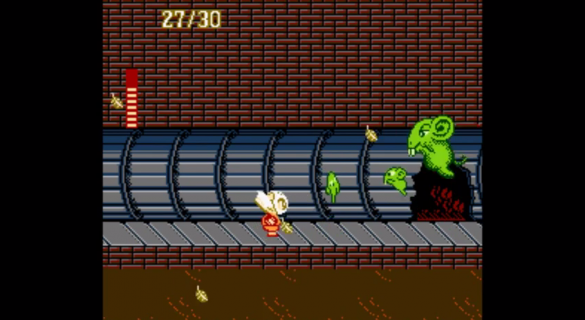 Just as the arcade original fitted its platform, Namco’s first 16-bit board, the System 1, so too does Wanpaku Graffiti play to its host’s strengths. The sprites, limited by the Famicom’s comparatively anaemic power, are small and complement the hyper-cute chibi look. This frees up more of the screen and results in platforming playing a far greater role in this Splatterhouse game than is usual. The controls, whilst solid, are in contrast to the rest of the series and surprisingly light; though, they undoubtedly lack the assurance of Mario’s NES outings, and feel closer to Alex Kidd’s movement in Miracle World. Fortunately, the jump is somehow both floaty and unresponsive, so Nowpro at least got this ‘right’ for the series. While the mechanics of Wanpaku Graffiti are even simpler than the original – with the excision of Rick’s duck ability – fortunately, the more expansive levels help maintain variety in the game play. The challenge relies primarily on enemy placement and platforming, resulting in Wanpaku Graffiti feeling like an ersatz Mega Man. 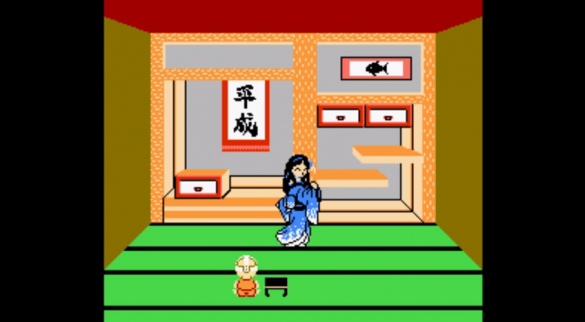 Level design can be bizarre at times, some areas force the player to take a hit and immediately afterwards give health. Though these instances are few and far between, it does betray a lack of polish and fine-tuning that, for example, the great Capcom titles of the era possessed. As noted though, Wanpaku Graffiti has the DNA of Splatterhouse, meaning it does what all Splatterhouse games do when the lustre of their mechanics begin to tarnish. As with the arcade version before it, and the mainline console sequels after, Wanpaku Graffiti can fall back on its themes and presentation to carry a player through to the end. This time, it is the knowingly irreverent treatment of pop culture and the previous games in the series, combined with a drive to see just what will be parodied next. Fortunately, actually seeing Wanpaku Graffiti through to the end is a less Sisyphean toil than before. This is certainly the easiest of the Splatterhouse games, though there are still moments where the challenge is unexpectedly magnified. 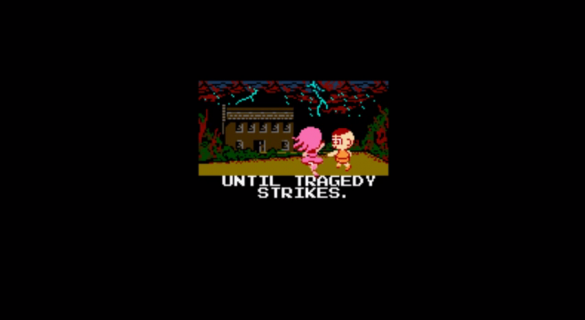 There is a strong idea at the core of Wanpaku Graffiti, the concept of a video game parody. It is executed with a love and knowledge of the subject material that shines through, the lack of similar titles for other genres and series feels like a missed opportunity for the gaming industry in general. It is an accessible Famicom game, with what little story there is translated into suitably ropey English; however, its worth as a game will be dictated by the player’s enjoyment of the Splatterhouse series and their knowledge of popular horror tropes. For existing fans of the games or genre, this is a worthwhile distraction full of pop-culture gags and knowing references to the original. Those less taken with Splatterhouse and its influences will find little here to convince them of its merits ahead of Alex Kidd, Mega Man or Mario.

The Sega Addicts Kids Table: Episode 39 – Much Ado About Circumcision

Rise of Nightmares gets creepy screenshots and box art