The story of Imageepoch’s CEO Ryoei Mikage’s disappearance captured the imagination of reporters and gamers alike as speculations about what could have happened to him swirled through the rumor mill. Unfortunately, with Mikage still nowhere to be found as of today, the company seems to have fallen apart without him and has since filed for bankruptcy. Stella Glow is the last game to be developed by Imageepoch and marks the death of the company, making it an important release in history as the final footprint of the company.

Stella Glow tells the story of Alto, a teenage boy with amnesia and his adopted sister Lisette. After being forced from their village by Hilda, the Witch of Destruction and her Song of Ruin, they join the 9th Regiment, an elite squad of the Knights of Regnant in their quest to join forces with the other Witches to stop Hilda in her crystallization of the world. All is not as it seems, however, and soon they find themselves fighting for the fate of humanity. Battles function in a similar fashion as other strategy games such as Fire Emblem, with characters moving around a grid and approaching enemies from the front, sides, or back. From there, players select either the character’s regular attack or any number of skills or magic attacks, which will give you a range of effect for the action chosen. When an enemy and attack are selected, you’re presented with a percentage chance for success along with how much damage a successful attack would do, if applicable. If an attack consists of multiple hits, the amount of damage shown is if all hits are successful. From there, the random number generator (RNG) determines whether or not an attack is successful and the effects of it. Each battle also has a small set of special objectives that can be fulfilled to guarantee a valuable or useful reward, such as new weapons and armor or Orbs for characters to equip.

This sounds very simple and straightforward in theory, but the reality is much more frustrating. For some reason, the game sees fit to highlight every square in a character’s movement range whether or not they’re able to actually move to them. Too often have I clicked on a square with the intent to move to it and been told that I cannot due to the square occupying a part of the stage not meant for characters to stand on, whether because of decorative debris or any number of seemingly arbitrary reasons. In addition to this, many characters seem not to be able to make full use of their abilities in movement. For instance, one of the Witches is able to fly, but for some reason she’s still unable to move to the top of a cliff or much farther than any other character, for that matter. Other limitations in character actions don’t make a lot of sense, either, and I suspect it’s in the interest of not making the game too easy, as with the presence of Song Magic it’s already fairly easy. For instance, you’re not able to shoot a bow and arrow or gun up any tall wall or cliff. However, this is far easier to accept than the fact that you cannot shoot that same bow and arrow or gun down from a cliff. Some bosses are really large, occupying a large number of squares in the grid, but only a portion of the squares are able to be targeted by attacks. All of this is in addition to the RNG actively working against players, or at least it did in my case. If an attack showed less than an 85% chance of success, I could all but count on missing, making any do or die situations I got myself into all the more frustrating.

Also present in the equation are Orbs, which are gems equipped to a character’s weapon that bestows any number of perks or additional effects. There are Orbs that drain HP and SP, (Skill Points) Orbs that boost attack and accuracy, and Orbs that add status effects to attacks, just to name a few. Most orbs have different tiers, with chance to activate increasing in each tier. Late game, it’s not uncommon for a character’s regular attacks to have a high chance to drain HP and SP as well as inflict numerous status effects, including ones that make it impossible for the victim to move or act. Naturally, the more powerful Orbs that grant abilities like Follow Up, which allows a character an extra turn if they killed an enemy during the first one, are very expensive or hard to come by. With all the possible outcomes, it’s not much of a stretch to suggest that having the right combination of Orbs can exponentially increase a character’s usefulness in combat.  Most players will spend a lot of time tinkering with Orbs, whether buying, refining, or equipping them along with your other equipment, so it’s a good thing that the menu system in general is easy to navigate and makes it easy to switch between the shop you’re in, equipment, and Orbs. 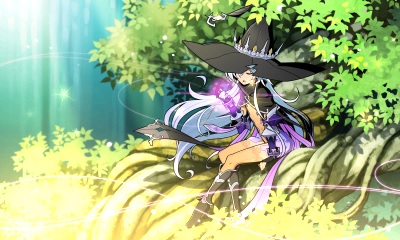 The game’s story is enjoyable for the most part, with it getting downright ridiculous at times. Dialogue and character animations in combat can get just as silly, and I’d be lying if I said that didn’t make me crack a smile at least a few times throughout the game. Stella Glow has a general air of not taking itself too seriously, which is good as the story is utterly rife with common RPG cliches- the teenager with amnesia, the ninja who’s probably the most conspicuous character in your party, and the stick in the mud knight, just to name a few. Anybody who’s spent more than five minutes browsing TV Tropes will more than likely be able to pick out at least a handful on their own, but there are many people who will be able to latch onto a particular character archetype as they have in many other games, and those players will likely enjoy the game even more.

Stella Glow boasts a lot to do besides fight, with Free Time featuring conversations with other characters that work a bit like the Social Links that fans of one of Atlus’s most famous series might appreciate, with each conversation increasing Alto’s affinity with the character he’s talking to. Each level of affinity yields new skills and abilities to aid characters in combat and, in the case of the Witches, new Song Magic to turn the tide of battle. You’re also given the opportunity to explore for the chance to find new items and equipment and grind money with side jobs, but as you’re only granted a certain amount of Free Time and can only unlock each Witch’s ultimate song by maxing their affinity, there’s really no reason to waste it on side jobs and exploring on your first playthrough. In New Game Plus, instead of three slots of Free Time per allotment, players are granted nine, making it a lot easier to max out your favorite characters’ affinity and take their abilities to new heights. Song Magic plays a huge role in the story and in battle, with each Witch’s song having different effects. However, like any musical instrument, the Witches will need to be Tuned,  giving access to new abilities and powers. In Tuning, Alto is able to enter the Spirit World residing in the heart of each Witch and subdue her fears and negative emotions in the form of monsters or even Shadow versions of themselves. Battles in the Spirit World work considerably differently than regular battles, with the goal often being to approach the target rather than kill all enemies.  As each proverbial weight is lifted from their hearts, the Witches’s songs will be purified, with each eventually able to “evolve” as their affinity is maxed.

The general aesthetics in Stella Glow are very pleasing, with scenic cut-ins for new locations, beautifully hand-drawn locales and character art, and lovely background music to match. In addition, in the story when day changes to night, a picture of where they are (often the Knight Barracks) will be shown as it transitions from day to night, the windows filling with light and the street lamp outside lighting up as the sky darkens. The soundtrack, composed by Yasunori Mitsuda, (Chrono Cross and Xenoblade Chronicles, among others) is a very nice mixture of different musical styles that reflect each locale in a way that makes them all stand out in their own ways. In addition, the battle music is exciting and gets really intense when things get real. Let’s take a moment to address what I feel is the real elephant in the room when it comes to the game in general: the localization. Although the dialogue itself seems to be well-translated and Atlus has done a great job with other games, including Lost Dimension, which I recently reviewed, the English dub for Stella Glow is disappointing in some places and borderline unacceptable in others. Many characters have irritating if not utterly obnoxious voices, (I’m looking at you, Popo) and from Chapter 8 or so on, I’ve run across at least 4 or 5 recorded lines in attack and other battle animations that have one or more syllables cut off. (The most egregious example being Rusty getting attacked and, upon the enemy missing, the line cutting off at “Like I’d let-”)

In most cases, though, the English dub is acceptable and even sounds pretty good in some characters’ cases. However, it completely falls flat when held up against the Song Magic that was left in its original Japanese form, which can only be described as nothing short of beautiful. Hearing Popo in particular alternating between her atrociously annoying English dub and her songs, which were performed by her original Japanese voice actress was like night and day. In a lot of cases, the voice acting could be overlooked, but in Stella Glow, nearly every scene is fully voiced, making the voiceover much more integral than its overall quality would suggest. Stella Glow is a game with its fair share of problems, not all of them being the fault of the actual developer, but all in all it’s clear after experiencing everything from the art to the music to the character animations that there was a lot of love and effort put into Imageepoch’s final project as a company, and it’s presented in a mostly pleasing package. With this being the first and only game from the company that I’ve ever played, it’s succeeded in making me want to eventually go back and play some of their better known games, such as the Luminous Arc series. If Stella Glow‘s main objective was to make me sorry that Imageepoch is no more, it’s definitely done its job.

(Song played in the audio version is Levia, Lisette’s ultimate Song as performed by her original voice actress, Yoshino Nanjo)

This review ran a bit longer than our usuals, but there’s still so much I could have touched on that I didn’t feel I had time to.  Tonight at 6 pm EST, (November 13) I will be taking over the Sega Addicts Twitter account (@segaaddicts) to host a Q&A session for people thinking of buying the game.  If there’s something you were curious about that this review didn’t answer, feel free to send us any questions about the game and what it has to offer, and I will answer them all in a spoiler-free manner.

Check out the 10-minute demo of Rhythm Thief