8/26/2016 UPDATE: Our score has been updated in light of our post-launch multiplayer experiences.

The old cliche has always been “Everybody loves an underdog”, and when it comes to the gaming industry, there are very few underdogs bigger than SNK. The once-proud arcade masters, despite making great games throughout the 90s and 2000s, never have quite been able to regain their foothold in the industry thanks to several acquisitions and curious moves throughout the last 15 years. Probably the most curious decision was the company’s move fully into the mobile and pachislot market, one that seemed to relegate beloved franchises like The King of Fighters simply to Japan’s numerous pachinko parlors. There was quite a bit of fear we’d never see faces like Kyo or Iori on a home system again.

And then, almost out of nowhere, The King of Fighters XIV was announced at the 2015 Tokyo Game Show, and SNK announced they would be leaving the pachislot business to focus on making console titles yet again. Despite what should’ve been joyous news, it was marred by a frankly lackluster reveal, with the move from KOFXIII‘s absolutely gorgeous sprites to incredibly low quality 3D models, bringing to mind the typically loathed Maximum Impact series, and gameplay that just simply had no life to it. Between this, and Street Fighter V’s increasingly successful reveals and beta tests, it looked like the legendary company and series’ rebirth would fail before it even had a chance to succeed.

But as time went on, the tables began to turn in SNK’s favor. While Capcom completely fumbled the execution of Street Fighter V, SNK slowly but surely began to build up steam and show that they weren’t giving up that easily. Announcing a 50+ character roster, a large amount of single player and multiplayer content, and constantly showing off signs of aesthetic improvement, skeptics became believers once again. And now, after months of anticipation, The King of Fighters XIV has arrived. Can SNK pull off the Cinderella story one more time? 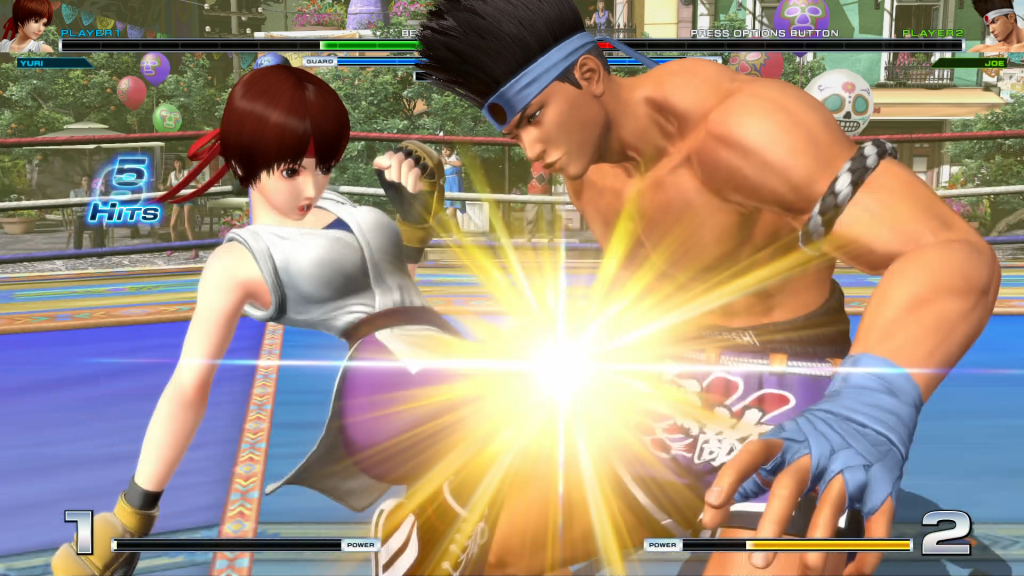 Let’s start with the fanbase’s biggest sticking point from day one: the graphics. The very first trailer did the game no favors- the visuals were described as mediocre and lifeless at best, and they drew comparisons to PS1 titles at worst. SNK took the criticism to heart, promising that the end result would look better, and eventually started releasing a development screenshot every day on their Twitter page to try to quell some of the negativity.

Thankfully, they weren’t just paying us lip service. While I do miss the spritework of XIII, and I do wonder how the game would look under cel-shading similar to Guilty Gear XRD, the final product is like night and day compared to what we saw at its debut. Character models won’t set the world on fire, but the vast majority of them are well done, and the little details, like the sweat on Mai’s skin and the elaborate designs for Mian’s clothing and constantly-changing masks, really pop out as well. The new characters, especially Sylvie, Mian, and Shun’ei, look great and fit in quite nicely amongst the multitude of classic KOF fighters. Add in some absolutely gorgeous environments- Geese Tower and The Bund being standouts- and a nice, clean UI and, while not quite near the standards set by Mortal Kombat X or the aformentioned Guilty Gear XRD -Revelator-, you’ve got a surprisingly good-looking fighter on your hands- an excellent job considering the uphill battle the team faced.

Honestly, the closest thing to a disappointment aesthetically is the sound design. While it isn’t necessarily bad by any means, and there are some great tracks such as “Yappari ESAKA”, “tachi bou ke”, “KD-SR”, and the vocal themes, a good chunk of the new songs are rather forgettable with no really catchy melodies sadly. It was nice to see some classic song remixes sneak in, though, such as KOFXI’s “New Order” for Kyo vs. Iori fights. As far as voice acting goes, everyone sounds pretty great, and no one stood out as bad to me, at least. Some will certainly dislike that a few iconic characters had their voices replaced, but in most cases, the new actors sound pretty comparable to their originals and certainly aren’t worth raging about. 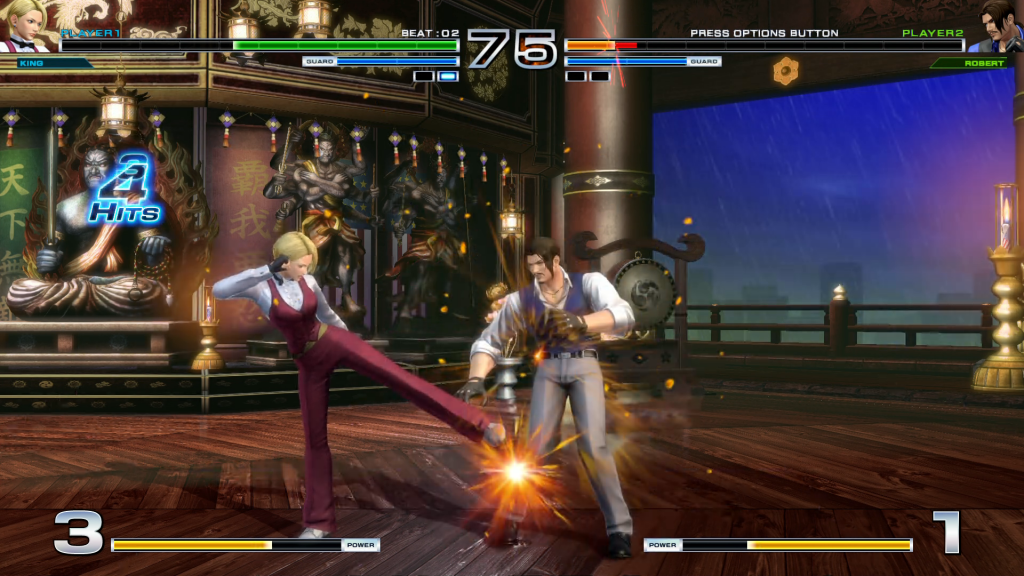 One of the few complaints some had about The King of Fighters XIII was that the game was too inaccessible to newer players, with so many systems to learn and incredibly precise execution needed to even compete. Thankfully, that isn’t quite the case here. While it isn’t as forgiving to newer players as, say, Persona 4 Ultimax, Dengeki Bunko Fighting Climax, or even Street Fighter V, KOFXIV’s difficulty is definitely toned down quite a bit compared to previous iterations of the series.

While the series’ trademark hard-to-master depth is still well in play, there are fewer systems to learn, and several characters’ inputs have changed to make them more appealing to the less experienced, which is a godsend if you’ve ever wanted to run a character like Vice, for example, but felt overwhelmed by their at-times insane inputs. The biggest change has American publisher Atlus’ handprints all over it, as KOFXIV has adopted the Auto-Combo system from the Persona 4 Arena series. While SNK has made it a little harder to work with than P4A‘s, requiring much closer proximity to your opponent to pull it off, and being nowhere near as juggle-friendly, it is certainly a welcome change, especially when you’re trying to get a feel for a new character’s timing.

Speaking of, SNK has done a great job of making the newcomers just as fun to use as the old standbys. When I first took a look at the new additions to the roster, I only expected to like Luong and Shun’ei, and even then they’d certainly never replace King or Yuri as my mainstays. Obviously, though, things went better than expected. It’s hard to really say there’s a bad one among the bunch, which is high praise considering how many debuts are in this game. Special shoutouts have to go to the aforementioned Shun’ei and Luong, as well as Geese’s sadistic butler Hein, sky pirate Love Heart, and my personal new favorite, the masked dancer Mian. If SNK ever decides it’s time to retire some of the classic characters, the future of this series will still be in pretty great hands. 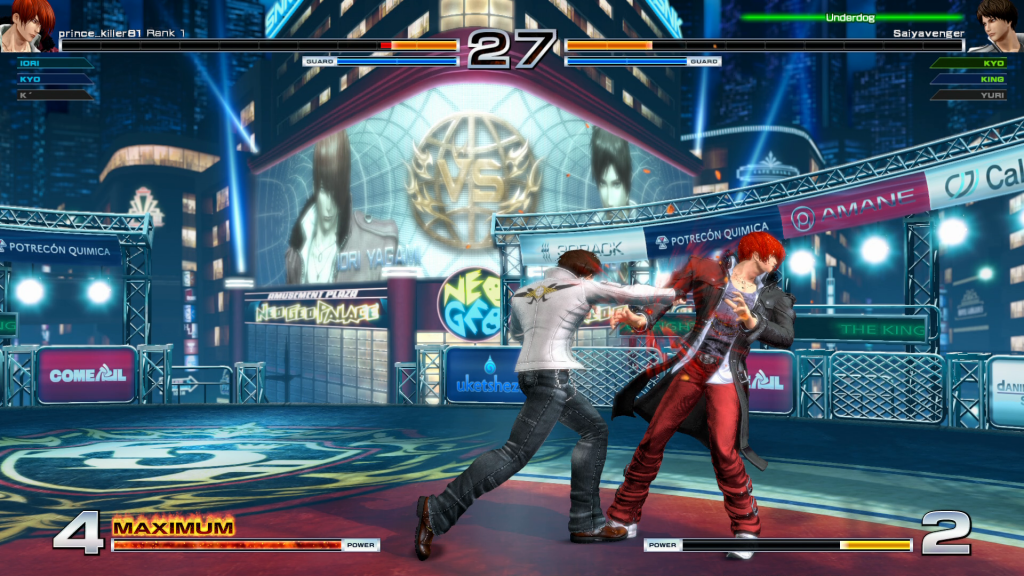 If there’s anything gameplay-related to be disappointed about, it’s the online multiplayer. Thanks to the game’s early leak, I was able to get a few matches in, and while nothing was nearly as bad as KOFXIII’s attempt at netcode, it was pretty wildly inconsistent, even when both I and my opponent would both have full connectivity. One match would play perfectly fine, then my next against that same opponent would feel like we were both underwater. That being said, I’m willing to fully chalk this up to the servers not being entirely ready yet, and hopefully the Day-One Patch will fix these issues up as well. Sadly, I was unable to try out Party Mode by press time, but I have high hopes for it, and we should be able to try it out on our upcoming stream. Also, one other little nitpick is not having voice chat off by default. Seriously, I’d rather not be deafened every time I enter a room.

UPDATE: Having tried the multiplayer again after the game’s launch and the Day-One patch, the netcode is simply absolutely inadequate at this point. While it still hasn’t hit KOFXIII levels of unplayability, we were only able to get one smooth match, despite every match having full connection ratings, and even had a couple instances of having to completely reset the game due to the netcode breaking. If you’re going in only for the multiplayer experience, it pains me to say this, but buyer beware.

Even if the multiplayer is iffy, the game still has a pretty nice selection of offline modes to keep players busy, such as arcade ladders in story mode, short combo challenges for every character, time attack and a proper survival mode, as well as plenty of tools in training mode. The only downside is there’s not a whole lot to unlock in the title. While unlocking classic artwork from the series’ past is pretty cool, and there are some neat easter eggs throughout, the only unlockable gameplay content is a couple of characters, with any potential alternate colors or costumes being relegated to DLC- a slight shame, but certainly not a dealbreaker. 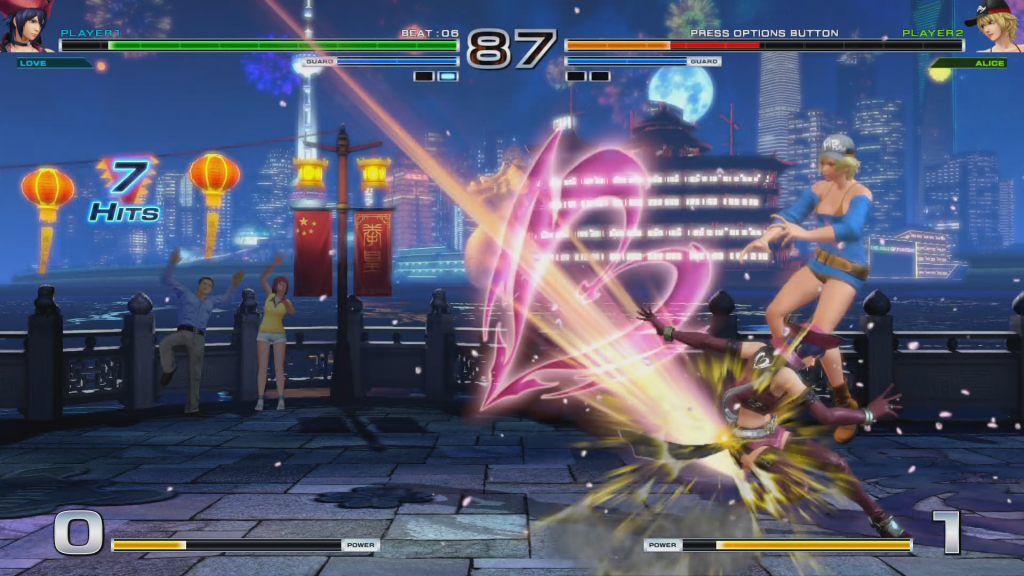 Overall, The King of Fighters XIV is absolutely legit. It plays as well as any other title in the storied series, has something for everyone, whether you’re a hardcore FGC pro, a casual, or anywhere in between, and a staggering roster you’ll spend hours on end trying out. Its incredibly iffy and disappointing multiplayer keep it from being able to dethrone Revelator for the title of this generation’s best fighter so far, but with its wealth of single player content and roster, it certainly deserves to at least be in the conversation, which is far more than anyone expected out of this title last fall.

SNK has put a lot of love into this title, and created a great foundation to build upon for the future, and I honestly can’t wait to see where they go from here.

(The game’s original score was an A-, but downgraded on 8/26/2016 to reflect post-launch netplay experiences.) 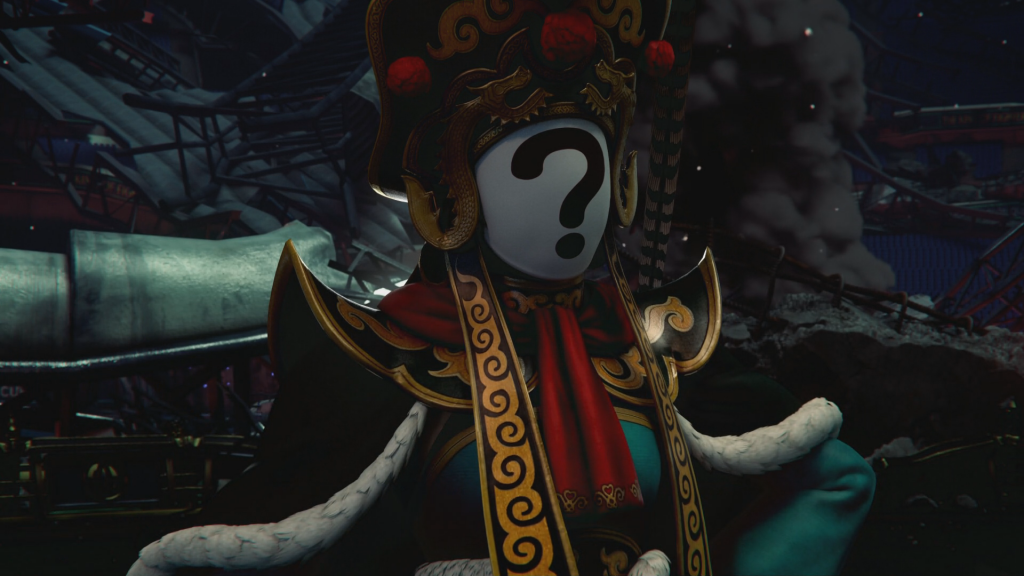 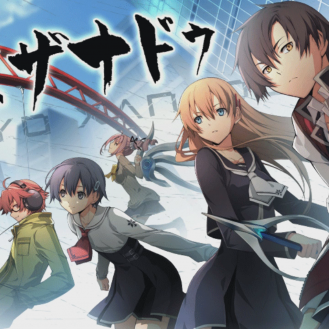