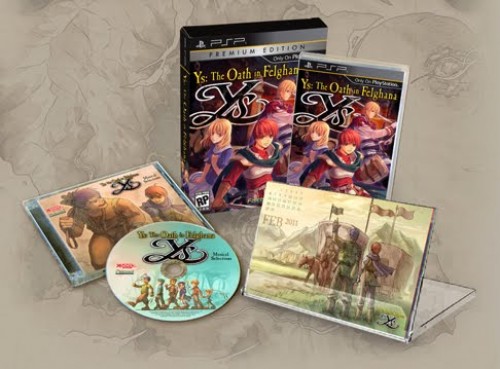 A few months ago XSEED localized Ys Seven, the shiny new entry in the classic Ys series. Naturally, Ys: the Oath in Felghana will draw comparisons and maybe even seem lacking in the wake of the sequel being released just a few short months later. Does the port of a 5-year-old PC remake of a 20-year-old game hold its own? Find out after the jump.

If you’ve played the original Ys III: Wanderers From Ys on any of the hundred-or-so consoles it was released for, Ys: OiF will be instantly recognizable. The original is a 2D side scrolling RPG akin to Zelda II, so I was a bit skeptical as to how it would translate to a 3D isometric view RPG but it’s done perfectly. Characters have the same conversations, albeit updated with better dialogue and a more fleshed out story, and the dungeons and environments retain the same look and feel as the 16-bit iterations.

Ys Seven boasted brand new built-from-the-ground-up PSP graphics and Ys: OiF pretty much ports the 5-year-old visuals. While they may look a little lackluster next to the shiny new sequel, OiF is still a very pretty game. It even does a few things better. The characters aren’t as well modeled or animated, but the cutscenes are directed much differently. In Seven, the camera pretty much remains static for the whole game in cutscenes or during gameplay, but in The Oath in Felghana the scenes have a more filmic presentation to them. This and the introduction of voice acting really exemplify the story. That is, they would if the game had a story to care about. 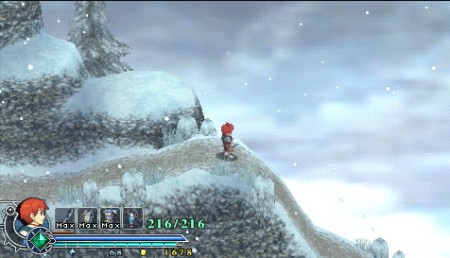 The story isn’t BAD by any stretch, it’s just nigh non-existent. The first half of the game moves at a leisurely RPG-style speed and really takes the time to introduce you to everyone and their relationships with each other. Then it almost feels like the game itself gets bored. Dungeons get shorter and shorter and more bosses are thrown at you one after another. By the last third of OiF it almost feels like Shadow of the Colossus with much less interesting fights.  The bosses themselves just get annoying. Not only are they each incredibly difficult, but they just get less and less inspired as the game goes on. It almost seems like they were decided by random word association.

“No we just- goddammit.” 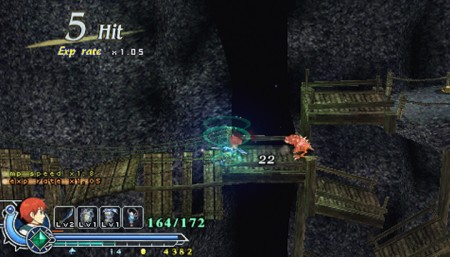 I was most interested in the combat when I was just fighting normal enemies. Even though it’s super hard, very little of the game requires any grinding and it’s ok because the combat is pretty fun. The controls aren’t as nuanced as Ys Seven’s three person party switching mechanic, as Adol decides to take this adventure solo, but it manages to have enough flourishes to stay interesting. For instance, depending on where Adol is during the arc of his jump, hitting the attack button can do any one of three separate actions.

The bosses would probably have been more fun if they were just a wee bit easier or if the game had any kind of health replenishing items. The player pretty much has to rely on save points, leveling up or Adol’s special attack mode to regain health. And that attack mode takes forever to recharge. I’d really like to see an Ys game with a brilliant Final Fantasy-tier story and retain the fast-paced real-time combat.

As far as presentation goes, XSEED deserves a standing ovation. The voice acting is actually pretty good for the most part and owes a lot to the crack localization team. Check out this 1 Up interview with XSEED’s Tom Lipschultz about localizing the Ys games. I love when people who are genuine super-fans get to work on their favorite games and do a great job. He and his team managed to take the RPG genre seriously while still having some fun and not making it seem ridiculous. OiF describes its own highes difficulty mode as, “A truly nightmarish, completely absurd level of difficulty. For the elitest of the elite only. Mwa ha ha.” At the beginning of the story Dogi is reunited with his long lost childhood friend and he obviously has some unrequited feelings for her. But Dogi knows how RPGs work, even though they’ve been friends since childhood Dogi tells Adol that she’ll probably fall for him because that’s just how it goes. 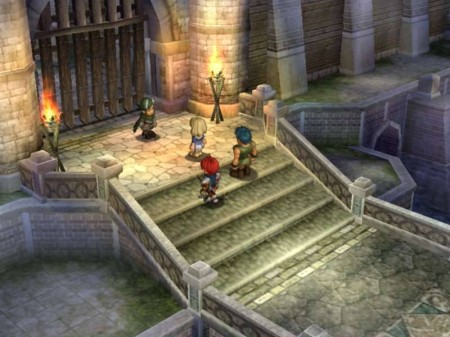 The whole package is beautiful. After beating it once, a second playthrough has new unlocked features as well as unlockable artwork and the beautiful opening and closing anime cutscenes are replayable. I’d like to see the whole Ys series get this treatment. With it’s fairly short playtime, brisk fighting mechanics and light story, Ys: the Oath in Felghana is very playable. While I had my issues with it, I can definitely see myself revisiting this title in the future. The only real problems are the difficulty (which I hesitate to say is a bad thing because a lot of people like that), the near lack of story and it being released in the wake of Ys Seven.

B+
Buy it. You could wait until Ys 1 & 2 come to the PSP and play them in order but it really isn’t necessary, the series is pretty episodic.

Valkyria Chronicles 3 to get episodic DLC