Since my experience with games such as Portal, The Talos Principle, and even Pneuma: Breath of Life, I have always enjoyed diving into platform-based puzzle games. When Factotum 90 showed up, I was curious since the game is not 2-player, but does use two screens. Couple those screens with a cute little cube-crab robot on each, and a quirky scientist over the radio, and you have  your team assigned to rescue a spaceship on the edge of sudden death. Let’s see if it is worth saving some lives, shall we? 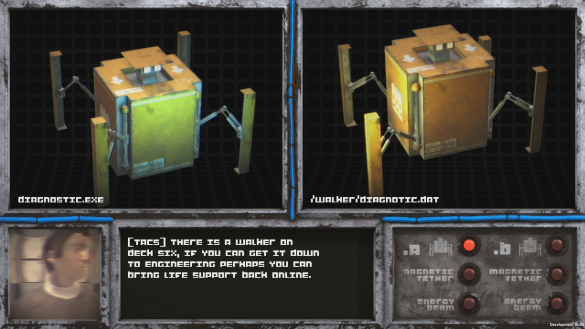 At first, you only control one of the two security droids, named Barbara. The game introduces Tacs, an engineer who is stumbling over his words to let you know something has gone wrong with the ship you are currently residing. Tacs is a pleasant fellow, who is either a ventriloquist or speaks so quickly his lips are a blur, because his mouth doesn’t move; this only really bothered me because the character’s head moves while he speaks. If Tacs’ mouth wasn’t going to move, why have the character move at all? A static picture would have maybe made more sense. Nit-picking aside, he is pleasant and does a good job of pushing the story along. 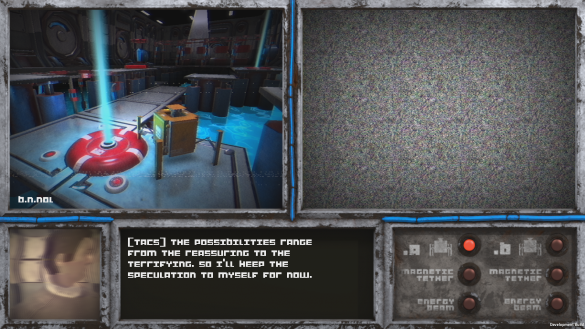 Once the second robot, Noel, enters the game, you learn how to use both to get from point A to point B. These tactics can include setting the droids on switches to activate platforms, finding and placing boxes on switches, activating control panels, using lasers to create temporary platforms, or using bombs as temporary activators/weapons. Left stick moves and turns the robot, while the face buttons are used to activate control panels, choose between the robots, or re-spawn the controlled robot at the beginning of the level. You can also run faster with one of the shoulder buttons. The right stick controls the rubber-banded camera. I’m not sure if the limited camera control was meant to force the player to use one robot as a second camera view, but that control doesn’t feel natural for a game released in 2017. 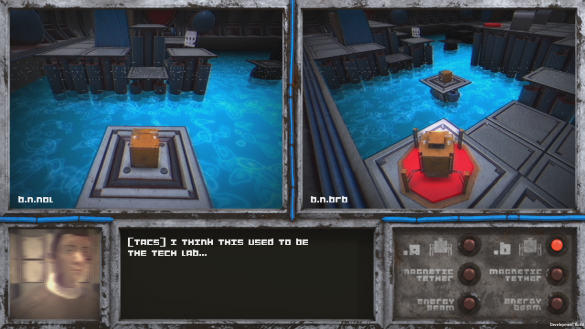 I mentioned earlier that the game uses two screens. Each screen displays a robot in your control. Occasionally you can use the second screen as a second camera when exploring, but otherwise I found myself wishing I could switch to one screen for more real estate. Having Tacs on the bottom left, a coding terminal on the bottom-center, and one-third dedicated to a stationary robot made it feel like I was playing Doom or Zero Tolerance on the Sega Genesis with a minimal amount of the screen dedicated to active gameplay. It didn’t hinder my experience, but I did wish sometimes I could switch to a “fullscreen” view when exploring far ahead with just one robot. 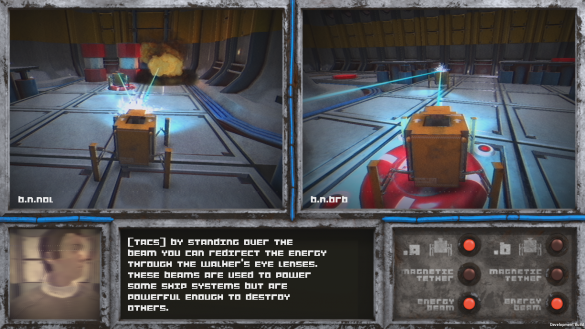 The game posed a few tricky puzzles, but overall was not horribly challenging. At one point, I found that I was able to walk on some plants that I had thought were simply background decoration, and honestly had my mind blown.  What other puzzle games let you explore the backgrounds? Another point in the game I found myself staring at the same laser-activated platform to acquire a collectible, only to find myself overthinking the solution. 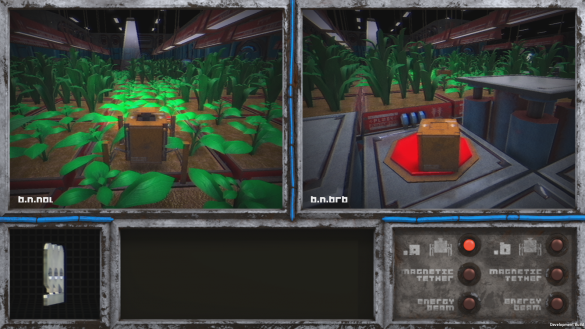 Factotum 90 has a lot of charm and light atmosphere in a world of puzzle games attempting to create unnecessary deep narrative, and I very much appreciated that, whether it was intentional or not. Even though it is slowly killing a crew trapped in space, the final boss is actually adorable and made it hard to acquire any motivation to despise it. Once I finished the story, I found myself wanting more and not feeling entirely accomplished, possibly coming from puzzle games that took me multiple days to finish. I felt that the game could be turned into a 2-player adventure by handing off the controller, but this tactic may also make it much easier to complete rather than wrapping just one mind around each puzzle. Regardless, Factotum 90 is a great addition to any puzzle fan’s collection and is definitely something worth spending at least an evening with. 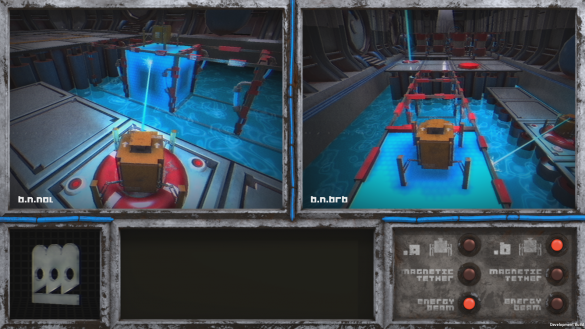