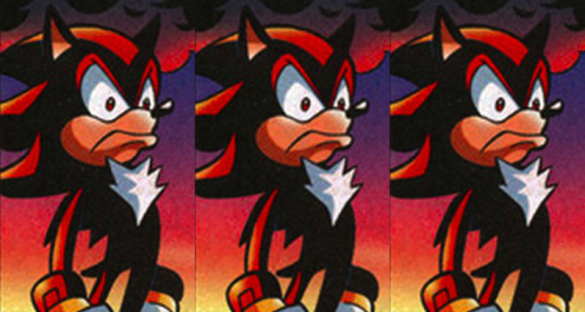 Ignore everything Elle said. Sonic Adventure 2 Battle is the stain on the ground below the dumpster fire. Sonic Adventure 2 birthed one of the most unoriginal, unneeded, and unwanted characters in all of Sonic lore: Bio Lizard. Oh wait, no. I meant the other “perfect life form.” But hey, if you dig SOAP shoes, worse camera angles, and a world with zero atmosphere, then have we got a game for you! That’s right, Shadow the Hedgehog laced up his jet boots and he’s ready to tell you why you should shop at Hot Topic, because it’s TIME TO PLAY SONIC ADVENTURE 2: BATTLE.

Everyone knows that Sonic Adventure, heck even the DX version, is worlds better than Sonic Adventure 2 Battle (which will be called SAB from here on because I’m lazy and it almost forms the word “Sob,” which is what I want to do when I play SAB anyway). No one admits to enjoying SAB over the prequel unless you grew tired of exploring a giant world that linked amazing levels together with a population, beautiful landscapes, and plenty to do in-between. You know what they did in SAB to replace the over-world? A map. A map that looks like a Denny’s kids’ menu. If the levels were more varied then I would understand the lack of connection with an over-world, but they are definitely not. In fact, every level has two versions that don’t even differ from each other. The only difference in each level is you will hear varied horrible dialogue from the evil group of characters who no one wants to bother with: Shadow, Eggman, and a pair of mountains.

You know who you want to bother with the least? Oh wait, let me ask you this: How badly have you dreamt about hopping in a mobile bathtub with the jumping ability of a pregnant elephant? I hope you raised that hand high, because I’m gonna throw a controller at your hands with enough force to break all your fingers since that is just about how effectively you can control Dr. Engman and Tails during their levels. And I hope you enjoy hide-and-seek, but for 15 minutes at a time, because Knuckles’ levels grew to no one’s request. The only semi-redeeming factor in this game is watching Chaos smash into each other’s faces for the amusement of their trainers. Wait, no. I lied. Chaos should probably drown in the lake they wander into. The only semi-redeeming factor of this game is zipping through Sonic and Shadow’s levels, because you know you are that much closer to ridding yourself of this game.