It seems that ghosts have possessed movie screens as well as chesty women.   With releases like Paranormal Activity grossed nearly $200 million worldwide and the upcoming Paranormal Activity 2 and The Last Exorcism, it seems the haunting genre is alive and well (yuk yuk).  Turning to the game world, I’ve found a prime example of this genre.  No, not Ghost Master, but the game that put Electronic Arts on the map; Haunted Starring Polterguy for the Sega Genesis and Mega Drive.

As the title suggests, you take the starring role of Polterguy.  Your mission, scare the Sardini family from there new mansion.  Why?  Because he “hosed u.”  No further explanation is given, but given the fact u’ved been hosed, is it needed?  You have two main scare tactics at your disposal: charging objects and special haunting skills.  You can charge objects buy leaping your spirit into items such as lamps, sinks, Televisions, etc.  This charge is then released when a member of the Sardini family interacts with it, producing blood dripping eyeballs from dartboards or free roaming vacuum cleaner from storage closets (and no, its not a Roomba).  You can also occasionally control these charged events, such as throwing plates around the kitchen.   Special haunting skills can be periodically used to zombify a family member and throw small green tornados among others.  Scare the Sardini’s out of rooms to collect ecto to power your meter.  When your meter runs out, you must make your way through an underworld where obstacles such as bats, steam geysers, and monster arms seek to drain your health, represented by a picture of Polterguy that slowly deteriorates with damage.  There are four houses you chase the Sadini’s from, which is the least viable aspect of this game because according this study, ghosts cannot follow you home.  The game also increases the challenge as you progress from lavish home to lavish home in the form of ecto beasts and a dog’s barking.  The games most difficult obstacle by a mile is crown molding, for trying to pass through a doorway is the hardest feat in the game.

Few of the charged scares in the house are truly scary; most played for laughs and gross out factor, which are much more funny than the joke effects.  One shocking effect is a charged closet door that whirls, revealing a naked, hooded, and bloody man hanging by his neck.  Charging objects is a clever gameplay mechanic that works well in the game.  Besides the underworld levels its basically the only thing you can do in the game.    You’ll be charging objects so much; you’ll begin to wonder how furnishings in your home would react to a charge. 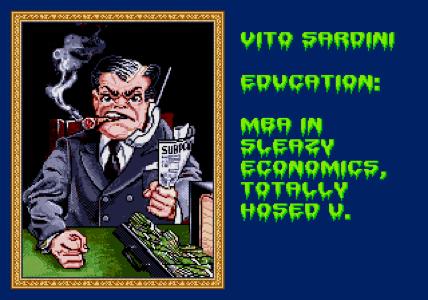 Walking around my apartment, I think of all the furniture and accoutrements that could be charge and used as a scare.  Well, clearly the freezer would have a dismembered body part inside.  Maybe a decapitated head would sit atop the record player, twisting round and round on the turntable as James Taylor’s “You’ve Got A Friend” is warped to a near unrecognizable stat.  I would have to worry about my couch turning in to a set of lips because I’m still in the market for a suitable love seat.  And the endless possibilities of what could be in my closet are too numerous to begin to describe, though I hope Polterguy would have good enough sense to avoid clichés by not use skeletons. 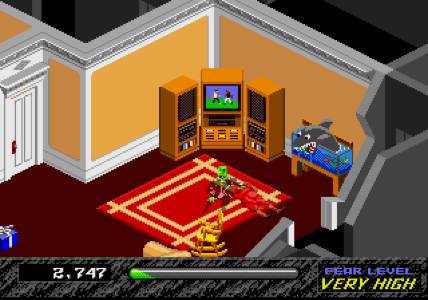 After all this thought about charge objects, I wonder if I could charge an object for a scare.  Looking around the house, I see a toy stuffed rat, the chosen toy of the new roommate’s schnauzer-poodle mix (very cute by the way).  I could rig an elaborate system with dental floss to make it move when she, who moved in all of one week ago, came home from work.   I decided this might not be a good idea to try out on her, so instead I used myself as bait.

Using the stuffed rat, I “charged” the shower by placing inside the tub area.  Closing the sliding door and exiting the bathroom, I was mortified to walk in later and find a rat in my shower.  Not really, but I felt if a ghost had charged my shower instead of myself, I would be quite alarmed.  But there was no joy to be had in knowingly trying to scare myself.  Only the dirty taste of remorse from wanting to hurt another.  Polterguy is blinded to any feelings of guilt due to his personal rage, steaming from being hosed.

Trying to think like Polterguy did not make me empathize with him.  His motives began to flood my head and they all circle back to one goal: revenge.  Revenge may be a dish best served cold, cold as Polterguy’s human carcass, but where does seeking revenge lead him?  Straight to the underworld, to hell.   But what is revenge but a journey, and what will happen to Polterguy after he is finished with his vendetta?  Polterguy is to short sighted to ponder this question and the answers it may bring.  By controlling Polterguy, you are dragged down with him. 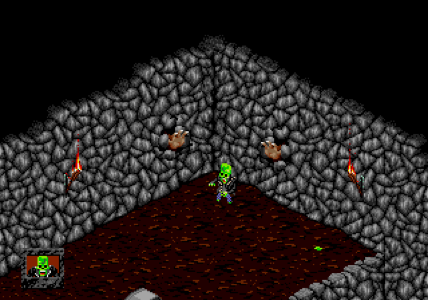 As you play, your efforts turn to laborious obligation.  You thirst for precious ecto, the only thing to keep you from the anguish of the abyss.  The only way to avoid misery is to inflict it on a family whose only crime was hosing.  Polterguy is not a hero. He is a pest, much like the rat in my shower.  Wanting to drive out a family from their home is EXACTLY what banks are doing to Middle America.  By rooting for Polterguy, you are also rooting for a single mother and her two sons to be forced to live in a homeless shelter.  If you enjoy this type of entertainment, then surely you are having a field day watching the news coverage of the BP oil spill and applying a healthy does of Black Gold to your loins while voting against gay marriage.  How dare you.

If you want to save your soul, avoid Haunting Starring Polterguy.  If you want to play a fun little game to kill some time, give it a shot.  But heed this warning; you may be the next one to be spooked out of your home.